Indigenous movement proposes to assume its own power

QUITO, March 24 (PL).-Given the rejection by Ecuadorian president Alfredo Palacio of the demands made by the popular sector, the indigenous movement is today to assume power itself and convene a popular consultation on the Free Trade Agreement. 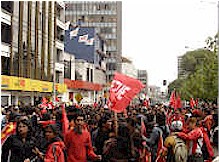 Students protesting against the FTA.

Santiago de la Cruz, vice president of the Federation of Indigenous Nationalities of Ecuador (CONAIE), emphasized last night that "the people need to be consulted," to which end his organization will carry out its own consultation process.

He stated that that decision had been taken on account of the dictatorial attitude of the president, who has not allowed the channels for dialogue that would facilitate a referendum on the FTA being negotiated with the United States.

For that reason, Luis Macas, CONAIE’s maximum leader, is not recognizing the leader of the present governor and is calling on Ecuadorians to decide their own future.

De la Cruz emphasized that from now they are going to exercise power as an indigenous people utilizing the movement’s channels and nationalities to convene a plebiscite from the communities and in community and popular assemblies.

He affirmed that there would be a withdrawal to redefine strategies and radicalize the mobilizations after the national assembly CONAIE is organizing in Riobamba, Chimborazo province.

Firstly, he said, there will be meetings within the communities and in the provinces, with a view to reprogramming actions and once again taking up protests on the fixed date of March 31.

The CONAIE vice president ratified that they no longer need a response from the head of state, who, he emphasized, "is not going to sign that treaty, we are sure of that, because he recognizes the fragility of his government and the instability reigning in that territory.

The indigenous protests exceeded expectations due to the fact that the people are now interested in the effects and damage of the FTA and are prepared to march to demonstrate their rejection of that pact, he stated.

He added that the CONAIE is continuing its work in defense of the population and has the backing of the popular, social, labor and student movements.