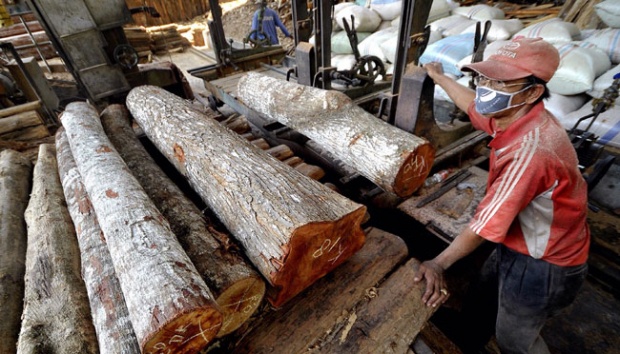 The European Union is seeking an explanation for Indonesia’s decision to scrap a highly regarded timber legality verification system, which the bloc uses to ensure it imports only sustainably sourced wood products.

Indonesia’s trade ministry issued a regulation in February, to take effect from May 27, that says exporters will no longer need to obtain licenses verifying that their timber and finished wood products come from legal sources. The so-called v-legal (“verified legal”) licenses are at the heart of Indonesia’s timber legality verification system, or SVLK, which took the country a decade to develop and implement in an effort to tackle illegal logging.

The European Union, one of the key markets for Indonesian timber and finished wood products, recognizes the SVLK as the basis for importing timber from Indonesia into its market. The scrapping of that standard now puts the timber trade between the two parties in question, said Krystof Obidzinski, a timber legality expert at the European Forest Institute.

He said the EU was “clearly very disappointed” with the decision and that he had heard other governments also asking for clarification about the new policy by Indonesia.

“If until May 27 there’s no steps [taken] that convince [the EU] that the conflict can be resolved, then there’s a possibility that the EU will move forward to suspend [the timber trade],” Obidzinski said in a web seminar.

“And I think the Ministry of Trade doesn’t understand what does it mean to have a timber trade without v-legal documents. They think it’s easy to sell timber to the EU without due diligence,” he said.

Michael Bucki, the climate change and environment counselor at the EU delegation to Indonesia, said his office had made an official request to the Indonesian authorities for consultation about the new regulation, “given the possible important implications it would have for the functioning of the EU-Indonesia Voluntary Partnership Agreement [VPA] on Forest Legality Governance Enforcement and Trade [FLEGT].”

Bucki told Mongabay there had been no response yet from the Indonesian government.

Violating agreements Under the VPA, signed in 2013, all timber shipped to the EU from Indonesia must be certified under the SVLK, which aims to track the chain of custody of timber products and ensure that timber is harvested in compliance with Indonesian law. Following further negotiations, the EU in 2016 recognized the SVLK as being fully compliant with the FLEGT, an initiative that bans the sale of illegally harvested timber in the EU.

While the agreement was initially voluntary, Indonesia ratified it through a presidential regulation in 2014, making it legally binding for both parties. The agreement means Indonesia must commit to SVLK certification for all timber exports — not just to the EU — as well as timber traded in the domestic market.

The trade ministry, by scrapping the v-legal licensing requirement, has effectively violated the Indonesia-EU agreement and its own 2014 presidential regulation, according to Syahrul Fitra, a legal researcher at the environmental NGO Auriga.

“It could be that the trade ministry didn’t read the presidential regulation at all” when issuing the new rule, he said.

Trade Minister Agus Suparmanto has justified the scrapping of the license requirement as part of a stimulus to boost the timber trade amid a slowdown caused by the coronavirus outbreak. Syahrul said the government will likely stick to this excuse when explaining its decision to the EU, but that the rationale doesn’t hold up.

He said the move would instead harm the timber industry by once again throwing the provenance of Indonesian timber into doubt. For more than two decades until recently, 80% of Indonesia’s timber exports consisted of illegally sourced wood, amounting to 219 million cubic meters (7.7 billion cubic feet) between 1991 and 2014. That translates into more than 2.3 million hectares (5.7 million acres) of deforestation — an area the size of the U.S. state of Vermont — and an estimated $6.5 million to $9 billion in lost revenue between 2003 and 2014.

With the introduction of the SVLK system in 2009, Indonesia managed to rebuild global trust in the legality of its timber exports, and in the process command higher prices for coveted tropical hardwoods such as teak, meranti and ulin, known as Bornean ironwood. Today, 100% of timber from both natural forest concessions and plantation forest concessions are SVLK-certified, although a small amount of timber from illegally logged areas still enters the supply chain.

In 2013, the value of Indonesia’s timber exports was $6 billion; in 2019, the figure was nearly double, at $11.6 billion, with the EU accounting for 9% of the market. And the value of its wood furniture exports to the EU has increased even as the EU’s total volume of furniture imports decreased, according to the EU-funded FLEGT Independent Market Monitoring (IMM).

A survey by the IMM, which analyzes trade data between the EU and countries with which it has timber legality agreements, found that the licensing aspect was what traders said made importing from Indonesia easier.

But all these achievements are jeopardized by the ending of the v-legal license requirement, Syahrul said.

“Once the v-legal license is scrapped, the EU will no longer believe” in the legality of Indonesian wood exports, he said. “Small and medium-sized wooden furniture exporters will face difficulty selling.”

The Indonesian Furniture and Craft Association (HIMKI), which has been at the forefront of lobbying efforts to drop the SVLK requirement for producers of finished wood items, says the policy is onerous for wood furniture exporters, especially small and medium businesses, because the process to acquire v-legal documents can be time-consuming and costly.

Wiradadi Soeprayogo, the deputy chairman of HIMKI, said that while the new regulation was welcome, the timing was not.

“This regulation will come into effect in the next few months, but it coincides with the coronavirus outbreak,” he said. “So it won’t be effective because everyone’s on lockdown — the U.K., Italy and France are all on lockdown. If this lockdown lasts for a long time, there will be an extreme [economic] crisis. Furniture producers will have stock that can’t get out [of Indonesia].”

Going against the sustainability trend The new policy also runs counter to a growing consumer trend for more sustainable and ethically sourced products, including in China, the world’s — and Indonesia’s — biggest wood buyer. China recently banned the trade in illegal logs by revising its forestry law, a decision that’s been called “a massive game changer.” The ban is set to come into force on July 1.

For exporting countries like Indonesia, that presents an opportunity to boost sales of certified-legal wood, the Indonesian environment ministry said last year in anticipation of the decision.

“If they start banning [illegal wood], we will be flooded [with orders],” Rufi’ie, the ministry’s director of timber marketing, said last September. “If we don’t implement the SVLK system when China demands it, we will no longer be able to feed the Chinese market.”

Indonesia exported about $3.7 billion worth of timber, furniture and other finished wood products to China in 2018, accounting for 28% of its total exports of those products.

“But moving forward the trend for the global timber trade, and also trade in almost all sectors, is for sustainable products,” she said. “And we know that legality is the first requirement for sustainability. So if we want to be sustainable, we have make sure it’s legal first. How can we say that Indonesian timber is sustainable if we can’t even guarantee it’s 100% legal?”

‘Humiliated and laughed at’ The new policy threatens Indonesia’s standing as a leader in timber legality; other countries have developed their own certification schemes inspired in part by the SVLK. They include Cameroon, the Central African Republic, Ghana, Guyana, Liberia, the Democratic Republic of Congo, and Vietnam.

“Vietnam is a heavy competitor to Indonesia because besides having a system that the EU perceives as operationally similar to the SVLK, they’ve also signed a VPA agreement [in 2018],” said Diah Suradiredja, the former head of Indonesia’s National Forestry Council (DKN), which advises the president.

She said Indonesia’s decision to scrap the v-legal requirement for wood exports would send a message to the world that Indonesia is undermining its own system, and could be seized on by competitors to boost their own market share.

This isn’t the first time the trade ministry has tried to weaken the SVLK system. In 2015, it waived the v-legal requirement for small and medium furniture and handicraft exporters. The EU promptly requested the government to reconsider the decision, saying that the SVLK standard not only helped to boost Indonesia’s timber exports but also translated into international recognition of the high standards achieved by the country in timber legality and good governance.

The Indonesian government duly backtracked, reviving the v-legal document requirement — only to scrap it altogether this time.

“In the eyes of the world, Indonesia will be perceived as a country that can’t secure investment because of its ever-changing policies,” Diah said. That leaves the country with less leverage in trade negotiations, including the Indonesia-EU Comprehensive Economic Partnership Agreement (CEPA).

Among the issues in the ongoing CEPA negotiations is a push by Indonesia for the EU to take a tougher stand against the illegal wood trade in Europe, in order to make its own wood exports more competitive. But this new policy will leave Indonesia “humiliated and laughed at” once the negotiations resume, Diah said.

Tri Nugroho, a senior official with a joint Indonesian-U.K. forestry program in support of the SVLK, said the trade ministry’s decision would mean more work for Indonesian negotiators and diplomats, who already have a tough time explaining Indonesia’s policies on deforestation for palm oil.

“If in the past they only needed to talk about peatlands, palm oil and forest fires, now they’ll need to also talk about illegal logging,” he said.