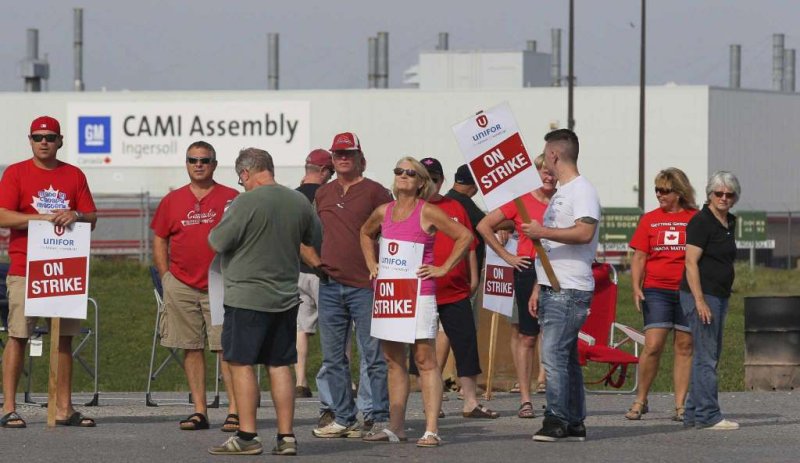 Ingersol plant a crown jewel for GM, but deal with Unifor challenging amid NAFTA talks

The Ontario plant where about 2,800 General Motors of Canada Co. auto workers decide to strike Sunday is “the poster child for what’s wrong with NAFTA”, the union president said after negotiators failed to reach a tentative agreement.

Members of Unifor Local 88 at GM’s CAMI plant in Ingersol, Ont. began to strike after negotiations fell apart, in part over commitments to prevent production from shifting to Mexico, according to the union.

Local 88 president Dan Borthwick said a priority through the bargaining process was obtaining a commitment from GM to designate the plant as the lead producer of the next-generation Chevrolet Equinox, a move that would ensure the plant would maintain core production levels in the event of a downturn or manufacturing changes in the auto industry. The Equinox, GM’s best-selling SUV, is currently produced at the CAMI facility and two plants in Mexico.

Long-term production commitments were a particularly significant concern for unionized workers after about 400 employees were laid off from the plant when GM shifted production of the GMC Terrain to Mexico this summer.

“This is one of the most productive plants in the world, and it’s losing out because they pay their workers $2 an hour in Mexico. It’s ridiculous.”

The strike comes in the midst of ongoing NAFTA renegotiations that have seen the auto industry emerge as a priority in discussions.

Since talks began in August, Dias has repeatedly pointed to GM’s CAMI plant as an example of why NAFTA is “a disaster” and needs to be significantly revamped. He said that Unifor, which represents about 23,500 autoworkers in Canada, will not support a renegotiated NAFTA that does not address the issue of significantly lower wages for Mexican workers.

“I am expecting that we will fix this as a part of NAFTA renegotiations, or else there shouldn’t be a NAFTA,” he said on Monday.

“One thing that’s for sure, any solution to NAFTA has to include allowing Mexican workers that build cars the opportunity to buy the damn thing.”

GM said in a statement that while the company and Unifor made “very positive progress” on several issues over several weeks, it as disappointed that a tentative agreement was not reached before the strike deadline.

“We encourage Unifor to resume negotiations and to continue working together to secure a competitive agreement,” the company said.

GM invested $800-million in the CAMI plant to produce the new Equinox, which began production in January.

Despite the plant being “a jewel in GM’s crown,” Brendan Sweeney, project manager at McMaster University’s Automotive Policy Research Centre, said these negotiations are challenging given the uncertainty surrounding the ongoing NAFTA discussions.

“If you look at a year ago today… (GM) knew the rules of the game so they could make investment commitments, but right now, they don’t know what’s going to happen,” Sweeney said.

“They are, understandably, hesitant to make long-term production commitments.”

Borthwick, who was on the picket line on Monday, said the union has had informal conversations over the phone with GM since the strike. The priority going forward will be the securing a lead producer designation, as well as other economic issues.

“We’ve seen the commitment GM has made to our members, we’ve made all our productivity numbers and received numerous quality awards. This year we received a slap in the face when they sent the Terrain to Mexico,” he said.

“Securing a product at our location and bringing our 400 people back from layoffs is one of our major concerns.”

Last year, unionized GM workers voted in favour of a contract that will invest $554 million in the automaker’s Canadian operations. The CAMI workers were not included in the deal, as the contract with GM was separate and expired a year later.