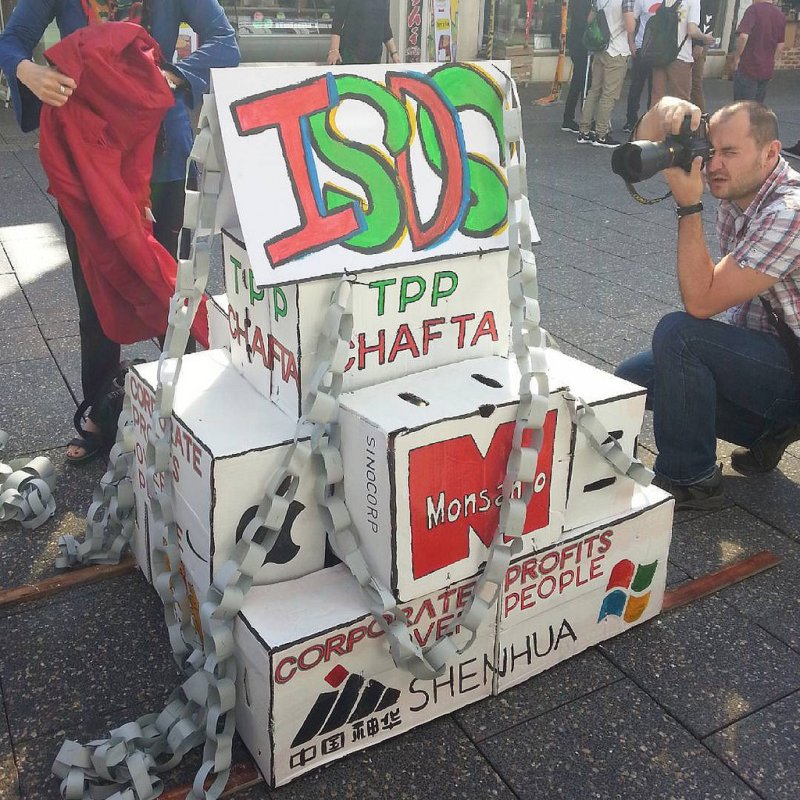 “Trade must be made to work for human rights and development and not against them,” the United Nations Independent Expert on the promotion of a democratic and equitable international order, Alfred de Zayas, has said today.

In his fourth report* to the UN General Assembly, Mr. de Zayas focuses on the adverse human rights impacts of free trade and investment agreements and calls for the abolition of Investor-State dispute settlement mechanism (ISDS) that accompanies most of these agreements.

“Over the past twenty-five years bilateral international treaties and free trade agreements with investor-state-dispute-settlement have adversely impacted the international order and undermined fundamental principles of the UN, State sovereignty, democracy and the rule of law. It prompts moral vertigo in the unbiased observer,” he noted.

“Far from contributing to human rights and development, ISDS has compromised the State’s regulatory functions and resulted in growing inequality among States and within them,” the expert stated.

In his report, Mr. de Zayas reviews a number of ISDS cases with adverse impacts on human rights, in particular when specific social policies have led to lawsuits by investors for alleged breach of trade agreements, and concludes that there is no justification to establish this privatized system of dispute settlement. “Investors can always bring claims before national jurisdictions with many appeal instances or rely on diplomatic protection and inter-State dispute settlement procedures,” he said.

The Independent Expert noted the European Commission’s recent proposal to create an Investment Court System for the Transatlantic Trade and Investment Partnership – TTIP. However, he warned that “it suffers from fundamental flaws and can only be adopted if the primacy of human rights is guaranteed, and those essential areas of State regulation including tobacco control, labour standards and environmental protection are carved out, i.e. excluded from the Court’s jurisdiction.”

The expert further called for a moratorium on all ongoing negotiations until all parties have been consulted, including labour unions, consumer unions, health professionals, environmental experts and other civil society, human rights and other interest organizations. Agreements that are not the result of proactive disclosure, public participation, or that are fast-tracked through Parliaments lack every democratic legitimacy.

“States have human rights treaty obligations to proactively inform the public, guarantee access to information, consult constituencies and ensure meaningful public participation in the conduct of public affairs,” Mr. de Zayas noted. “Civil society should demand transparency and accountability from governments, invoke pertinent provisions of the International Covenant on Civil and Political Rights, and demand that the adoption of any future bilateral or multilateral agreements that have the potential to affect the life and rights pf millions of people be subject to referenda.”

“Ex ante and ex post human rights impact assessments must be conducted and under no conditions can the international community allow investors and transnational corporations to usurp State functions and thus prevent States from fulfilling their human rights treaty obligations,” he insisted.

The Independent Expert also called for the organization of a World Conference on trade and investment agreements with a view to making them compatible with the UN Charter and human rights norms.

Recalling that States are treaty-bound by regional and universal human rights treaties, Mr. de Zayas called for a reaffirmation on the legal priorities, which should be issued by the International Court of Justice (ICJ) by way of an advisory opinion.

“The General Assembly should refer pertinent legal questions to the ICJ requesting an advisory opinion on the priority of human rights treaties over other agreements, with due application of article 103 of the UN Charter which stipulates that in the event of a conflict the UN Charter prevails over any other international agreement, “ the expert explained.

“The violation of human rights norms could also be tested by way of inter-State complaints procedures of the Human Rights Committee and Committee on Economic Social and Cultural Rights, since human rights obligations are erga omnes and all States parties have a legitimate interest in ensuring the integrity and proper application of human rights treaties,” the Independent Expert noted.