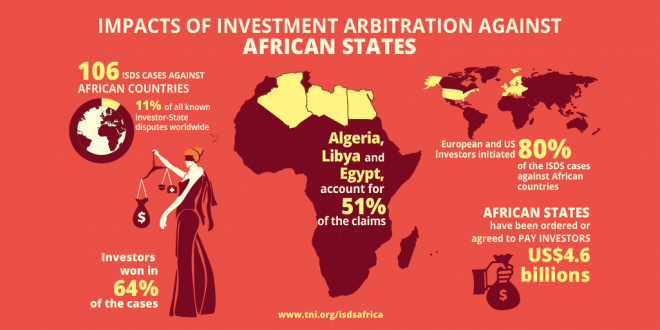 By the end of August 2019, African States had been hit by a total of 106 known investment treaty arbitration claims. This represents 11% of all known investor-state disputes worldwide. Between 2013 and 2018, there has been an unprecedented boom of claims against African governments. During these last six years, they received more investor claims than the previous 20 years combined. This paper exposes how the international investment regime affects African countries.

The most frequently sued African countries

So far, 28 African countries have been sued by investors at international arbitration tribunals. However, just three countries - Egypt, Libya and Algeria - alone account for 51% of the total number of claims against African States.

States have been the main losers in investment arbitration cases. The interests of investors have been upheld in 64% of the cases, when considering the 61 cases against African countries that ended either in a decision of the Tribunal or a settlement between the parties. Meanwhile one third of the lawsuits are still pending resolution.

The costs of ISDS lawsuits

The costs of investment lawsuits run into millions and billions of US dollars, and have the potential to bring the public budgets of most African countries to breaking point.

Amounts claimed by investors: Total claims against African states since 1993 add up to US$ 55.5 billion. In 36 claims investors demanded at least US$100 million. On 10 occasions, the claims climbed to US$1 billion or more. Both Algeria and Egypt have received claims for US$15 billion each.

Amounts to be paid by States: African states have been ordered (by the arbitrators) or agreed (as a result of a settlement) to pay investors US$4.6 billion to date. The amounts paid in one third of the cases remain unknown, however, so this figure is in fact likely to be much higher. However, this amount alone is already equivalent to almost three times the GDP of The Gambia, or twice the GDP of the Central African Republic in 2018.

The highest amount ever paid by an African country as a result of a single investor claim was the US$2 billion paid by Egypt to Unión Fenosa.

In the claims filed against African countries, almost all investors alleged violations of BITs (100 cases out of 106). However, in two cases the investors invoked the Investment Protocol of the South African Development Community (SADC) and in another two the Organisation of Islamic Cooperation (OIC) Agreement on Promotion, Protection and Guarantee of Investments. One claim was also based on the Arab Investment Protocol and one on a Free Trade Agreement (between Morocco and the USA).

Sectors affected by claims African countries have experienced a growing number of claims filed against them, especially in the construction sector, which accounts for 23.6% of all lawsuits. Manufacturing and the mining sector have also been heavily affected.