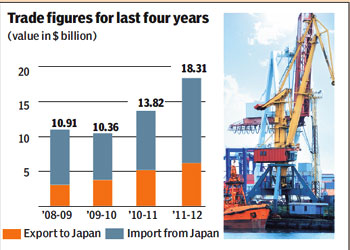 Since the India-Japan Comprehensive Economic Partnership Agreement (Cepa) took effect last August, trade between the two countries has grown a bit faster compared with the traditional growth. However, this is in favour of Japan. Though it is too early to arrive at definite conclusions, the trend up to March signals Tokyo successfully using tariff cuts to penetrate deeper into the Indian market for goods.

India-Japan merchandise trade grew 38% since August last year. Japanese exports to India showed a record jump of 40.96% in 2011-12, while its imports from India managed to grow only 18.39%.

This contrasts with the fact that Indian exports to Japan in 2010-11 had grown 43% and imports had grown only 28%. So, Cepa seems to have just reversed the trend within a short while. During 2009-10, the growth in Indian exports to Japan was 19.9% and imports showed negative growth (-14.6%). While the trend of high export growth got undermined in 2011-12, the year in which Cepa was signed, it may also be noted this stunted growth in exports was despite the policy push in the post-tsunami scenario.

However, experts are of the opinion that the trend might be too early to be discussed even as they admitted it is an area of concern. “Our export to Japan has grown by over 43% in 2010-11 when the imports in the corresponding previous period went up by only 28%. The hike in imports primarily is on account of machinery and appliances, iron & steel, and pearls and semi-precious stones. However, since the government feels exports to Japan can reach to $12 billion by 2014, there needs to be a further push to exports through the comprehensive economic partnership,” said M Rafeeque Ahmed, president, FIEO, the apex body of exporters.

Recently, during the second Japan-India ministerial business government policy dialogue with Yukio Edano, Japan’s minister of economy, trade and industry, he pressed for further access in pharmaceuticals and IT so that exports can get a further boost.

Commerce minister Anand Sharma said after discussions that at present India’s share is less than 1% of the total Japanese pharmaceutical market, and so the Japanese side should remove all non-tariff barriers so that real benefits envisaged under Cepa materialise for India.

Sharma said to reduce the overall cost of healthcare, the government of Japan can consider to expand the share of generic medicines. “Sharma also said that considering the (high) demand of generic medicines in the Japanese market and the capability of India to meet this demand, it will prove a win-win situation for both the countries. It will be beneficial to both countries to start negotiations on nursing & health care professional services as soon as possible.

Experts also share similar sentiments. Ahmed of FIEO told FE that Pharma and IT are the sector where India enjoys competitive edge and opening of these sectors will immensely benefit Indian exporters.