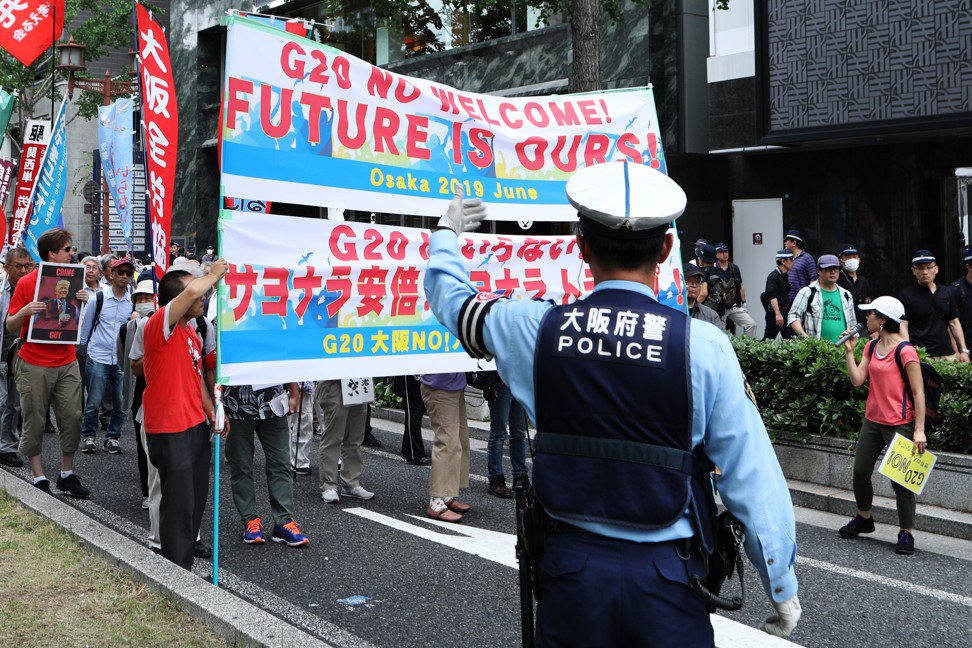 These key actors will try to cool down the boiling trade disputes between China and the U.S. and seek a solution to the security crisis in the Middle East. Negotiations will be intense at the lower diplomatic and political levels as well at the Osaka-based summit, set for June 28-29.

Officials from 37 countries are gathering in Osaka — including Turkish President Recep Tayyip Erdogan, who is due to meet separately with both Trump and Putin — and over 2,000 journalists from around the world will follow the deliberations.

In a recent online guest column, Japanese Prime Minister Shinzo Abe laid out an ambitious agenda for the meeting focusing on three issues:

“The first agenda item concerns what I believe is the most important challenge of our times: working to maintain and ultimately strengthen the international order for free and fair trade,” he wrote for the Project Syndicate.

“The second item on the agenda concerns the digital economy. Digitalization of the economy has enabled unique and unprecedented business models, but it has also brought new challenges, such as double non-taxation for multinational companies. We can resolve such issues only through international cooperation,” he continued.

“The third issue for the Osaka summit is the importance of innovation in tackling global environmental challenges,” he wrote. “The goals outlined in the Intergovernmental Panel on Climate Change’s ‘1.5˚C report’ are not achievable through regulation alone. Disruptive innovation that flips something negative into something positive will be the key to realizing the world’s climate goals.”

But much of the agenda may well be overshadowed as Trump and Putin discuss Mideast politics, and Xi and Trump try to find a way to stop the escalating trade war between the U.S. and China, a conflict which is destabilizing international trade integration.

Under Japan’s presidency, the G20 has been focusing its efforts on fix global current account imbalances through multilateral policy coordination rather than bilateral trade deals.

“A U.S.-China deal is within reach if Xi and Trump show courage at the G20 summit,” commented Craig Allen, an analyst at the U.S.-China Business Council.

At the 2017 G20 meeting in Germany and its successor in Argentina the next year, Trump — who has scorned international platforms — clashed with many of the group’s members over climate, trade, and migration policy.

These meetings have struggled to cope with a U.S. shift toward unilateralism under Trump. These leaders’ summits have avoided using previously standard language about rejecting protectionism and promoting global cooperation.

But Dan Ciuriak, economic consultant and the director of Ottawa-based Ciuriak Consulting, told Anadolu Agency that progress would be possible at this year’s summit.

“First, the G20 provides a venue for President Trump and Chairman Xi to meet in a context where other world leaders can provide encouragement for de-escalation and a return to negotiation,” he said.

“Second, the G20 must maintain a consensus among ‘the rest’ against unilateralism and in support of the key multilateral institution, the WTO.

“Third, I think it is particularly useful to think about these global tensions from an African perspective. The G20 should be listening to African voices. The African Continental Free Trade Agreement (AfCFTA) has been established at a time when the global trade arrangements are breaking down. It’s time to bring the African Union into the G20 as a full participant.”

After ratification this April by Gambia, the African trade pact — over a half-decade in the making — went into force on May 30 and is to enter its operational phase after a summit this July.

Repeat successes for the G20?

The ambitious goals of this year’s summit echo the G20’s previous intervention that helped to end the 2008-2009 financial crisis.

The G20’s signature achievement was to coordinate a response to the financial and economic crisis and prevent the world from sinking into depression, said Ciuriak.

“This response consisted of providing support to systemically important financial institutions, pushing hard against protectionist measures, and generating a consensus on the need for a strong fiscal and monetary stimulus. An essential element of that success was the participation of the BRICs [Brazil, Russia, India and China] – the rising emerging markets that helped power the 2000s boom – alongside the G7 economies,” he explained.

But the program the G20 backed had less obvious success in its subsequent expansion, he said.

“Rather than seeking fundamental reforms, the features of the model of globalization that had resulted in the growing disparity of income were not addressed. Creeping trade protectionism was allowed to fester.

“And the G20 was slow to respond to the emergence of the data-driven economy and the conflicts to which it would give rise.”

The results were seismic jolts to the global governance framework with Brexit, Trump, and the eruption of the trade and technological war between the U.S. and China, he added.

“The G20 was unable to prevent these,” Ciuriak stressed.

Economists and policy-makers around the world will be watching Osaka to see if a more fluent response to the current crises in trade and income inequality can be found.

It is not clear from today’s perspective that the G20 is the institution to stitch things back together, according to Ciuriak.

“It may, however, be the institution that will be called on to spearhead the response to the crisis into which the current trade and technological war threatens to tip the world. IMF Managing Director Christine Lagarde has already underscored that the G20 needs to be prepared for this,” he said.

Recently, European economies have begun placing an emphasis on that protection of personal data, and towards that end introduced the European Union’s General Data Protection Regulation. In the absence of a common international rule, individual countries and regions have competing interests in the extremely important issue of data protection and governance.

The Osaka summit will include important discussions of data governance. The central issue is enabling consumers and users of online services to keep control of their own personal data.

However, the evolution of international data governance is likely to continue for a long time after the summit has ended.

“The Osaka G20 may succeed in getting to a statement, but we are a long way from concrete achievements in getting international governance in place,” said Ciuriak.

As Abe pointed out in his agenda, the digital economy will be a priority topic at the summit, with much attention devoted to how to adapt tax systems and regulations for it.

The rules are designed to improve transparency, close loopholes, and restrict the use of tax havens.

The new proposals are intended to restrict international companies from making use of low-tax countries and ensure that governments capture a fair share of profits from the massive growth of businesses like Facebook, Google, and Amazon.

With Turkish President Recep Tayyip Erdogan set to join fellow world leaders at the summit, issues of special interest to Turkey will also be dealt with.

Following a UN report last week on the killing in Istanbul of Saudi journalist Jamal Khashoggi urging a deeper probe of figures such as Crown Prince Mohammed bin Salman, Erdogan is expected to raise the issue at the summit.

Erdogan is also expected to meet with the U.S.’ Trump and Russia’s Putin. The meetings come amid tensions with Washington over Turkey’s purchase of Russian S-400 missile defense systems, due for delivery in July.

The U.S. claims the Russian system will clash with NATO equipment, in particular the U.S. F-35 jets, and has threatened sanctions.

Turkey says there is no conflict between the two — proposing a commission to clarify the issue — and has shrugged off the sanctions threat and the U.S. cutting it out of the F-35 program.

Osaka will be the first time Erdogan and Trump have spoken in person about the issue since it began heating up this spring.

Amid continuing cease-fire violations in Idlib, Syria by the Assad regime, Erdogan is also likely to urge Putin to do more to rein in his Syrian allies.

Under security plans a full year in the making, there will be far more police officers — some 32,000 — than delegates and journalists on hand in Osaka. Security for the G20 summit has been hailed as a success.

Officials announced traffic restrictions in nine parts of Osaka on June 27-0. The Intex Osaka area, the main venue for the summit, will be treated as a high-security area.

Starting as early as Monday, public parks and parking lots around Osaka’s Itami airport will be closed, while coin lockers and trash cans at local train stations will unavailable for use.

The G20 is the premier forum for its 19 member countries — including Turkey — and the EU. The G20 president invites several guest countries each year to its annual meeting.

The G20 was formed in 1999 as a meeting of finance ministers and central bank governors in the aftermath of the Asian financial crisis. In 2008, the first G20 Leaders’ Summit was held, and the forum played a key role in helping member countries respond to the global financial crisis. Since then, G20 leaders have met 13 times.

Together, the nations of the G20 account for around 80% of global economic output, nearly 75% of all global trade, and about two-thirds of the world’s population. Experts believe that building personal relationships among leaders has substantial effects on making foreign policy. By gathering so many leaders together, G20 summits offer rare opportunities to develop such relationships and foster bilateral ties.

In November 2020 Saudi Arabia is set to act as host for the annual G20 leaders’ summit.