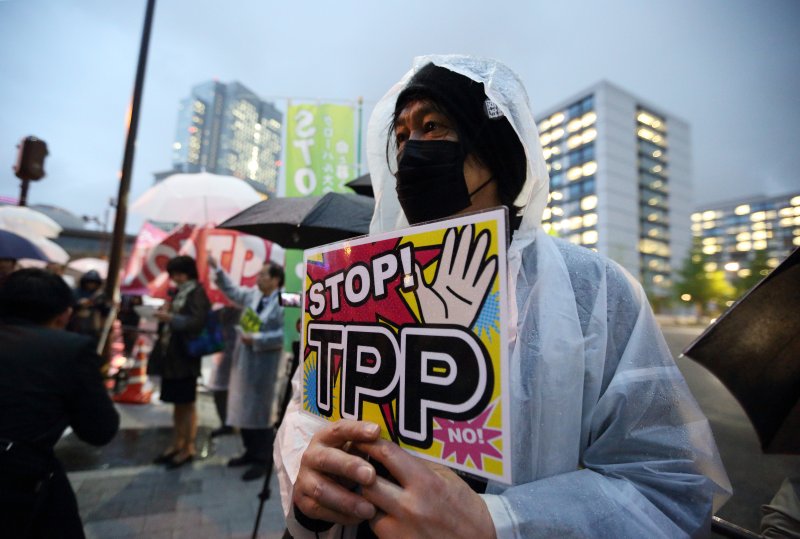 Although the actual text of the TPP has not been published (because the final version is not available yet), the Japanese government has recently disclosed key elements of the pact. Interestingly, the government refers to the agreement that was reached on 5 October 2015 in Atlanta as a “broad agreement,” implying that it may not be the final version including all the details yet. The following information that may not have been as broadly reported in other international news is based on Japanese government sources, including the following presentation (in Japanese):

1. Abolishing tariffs for 95% of all traded items

The TPP has a very high liberalization rate. Tariffs for many agricultural products and99.9% of industrial products (e.g., cars, auto parts, electronics, chemicals) will be abolished. Tariffs for many items will be lifted immediately once the TPP comes into effect (e.g., agricultural products such as grapes, kiwifruits, herring, prawns, crab, yellowfin tuna, suckling pig, red beans, eggs.). On the other hand, tariffs for some items will remain and will end in the 3rd to 16th year of the pact (e.g., orange juice, cigarettes, wine, plywood).

The TPP provides common rules to facilitate doing business, competition and investing in other member countries. Some general rules include:

(a) Vietnam to scrap the economic needs test

Vietnam commits to abolish the ENT after a period of 5 years from the issuing date of the TPP agreement. (At least 6 member countries respresenting at least 85% of the GDP of all initial members must ratify the pact within 2 years before it can be issued.) Foreign retailers are very interested in this market with an emerging middle class and surging disposable income.

The ENT currently requires foreign investors in the retail sector (including supermarkets, malls, and convenience stores) to undergo licensing procedures for each new outlet they intend to open beyond the first one. This has long been seen as a barrier to market access.

Currently limited to a maximum of 65% foreign ownership, under the TPP foreign investors will be allowed to own up to 75% stakes in telecommunication businesses in Vietnam. Foreign ownership caps are also slated to be raised for local banks and entertainment services, such as theaters and music clubs.

Vietnam will generally not be allowed to impose new export tariffs or maintain the same on items such as on mineral resources. Vietnam will also be obliged to use best efforts to announce new custom regulations at least 60 days before they come into effect and to respond to reasonable questions from member states within 60 days as well.

In addition, the TPP generally provides for product-specific rules of origin applicable to all TPP member countries. Producers, exporters and importers will be allowed to issue certificates of origin themselves. E-custom filing is encouraged.

Investors from member states will be able to bring legal action against the Vietnamese government using international arbitration tribunals outside of Vietnam.

The ICSID, UNCITRAL, ICC or other arbitration rules can be applied, but the TPP’s ISDS provisions set forth a few basic rules:

However, apparently, the TPP cannot prohibit countries from implementing restrictive measures based on justifiable public policy grounds. In the past, Vietnamese courts have often declined the recognition and enforcement of foreign arbitral awards on the ground of contradicting ‘fundamental principles of Vietnamese law’ which is similar to the public policy argument. Accordingly, how frequently TPP ISDS awards against Vietnam will be enforced in Vietnam in the future is still uncertain.

Again, the above information is not based on the actual text of the TPP but secondary governmental sources. A review of the actual legal text may reveal discrepancies. We will keep you updated on interesting developments and look forward to receiving your comments.