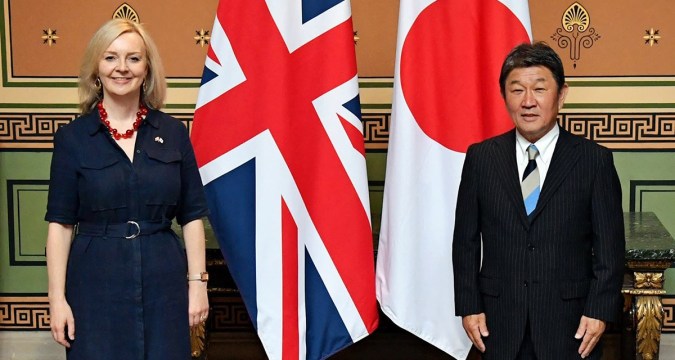 Japan and the United Kingdom are scheduled to sign a bilateral free trade agreement on Friday, the UK’s first major trade deal as an independent trading country.

The UK-Japan Comprehensive Economic Partnership Agreement is expected to increase trade between the two countries by an estimated Є16.8 billion ($19.9 billion), according to the UK Department for International Trade. The new deal takes effect when the UK formally leaves the European Union (EU) at the start of 2021 and will guide the two countries’ post-Brexit trade relationship.

After launching negotiations in June, the deal was agreed in principle by International Trade Secretary Liz Truss and Japan’s Foreign Minister Motegi Toshimitsu on a video call on 11 September. Topics of negotiation included the import of Japanese cars – with the UK agreeing to gradually lift tariffs until they reach zero in 2006 – and exports of British foodstuffs to Japan.

Noriko Hama, a professor of economics at Kyoto’s Doshisha University, said both London and Tokyo went out of their way to "avoid the difficult issue" and swiftly reached an agreement on bilateral trade – something that has benefited both nations’ leaders politically.

"The agreement was crafted very carefully and does not include agricultural products, for example, so there were not too many bumps in the road before both sides could ratify the deal," she said.

"And it is good for Tokyo and London as it does emphasize the ’special relationship’ again and works to a degree as a propaganda exercise as well, showing to the UK that Brexit is a positive," she added.

’Tailor-made agreements’ Martin Schulz, chief policy economist for Fujitsu Ltd’s Global Market Intelligence Unit, said the discussions on trade went "smoothly" because both governments stepped back from initial plans for a wider-ranging agreement in order to meet the time constraints.

"It would have been very easy for them to effectively roll over the EU-Japan free trade agreement, but at the outset both Japan and the UK said they wanted a much more interesting and forward-looking agreement," he said. "Those are the reasons that the UK has cited for leaving the EU, it wanted tailor-made trade agreements that went beyond EU deals."

And while the final version of the Japan-UK deal may not be ground-breaking, he said, there is now the possibility of more opportunities once the fundamentals are in place and a chance for more innovative approaches to trade after the deadline has been met.

Regional security For both Japan and the UK, the agreement signifies much more than just bilateral trade.

London sees the deal as a potential showcase for future free trade agreements with the US, Australia, India and other potential trading partners as soon as it removes itself from the EU.

Once the economic alliance is in place, Japan hopes to also deepen its security alliance with the UK and its partners. It hopes London will play a bigger role in security in the Far East and ultimately deploy military units to the Indo-Pacific region, a strategy aimed at containing China’s expansionist policies in the region.

"Of course, the main reason for his visit was to discuss Brexit and the new free trade agreement between London and Tokyo, but China was certainly on the hidden agenda and Japan is very keen to reinforce security ties with the UK and the US to counter the rise of China," said Go Ito, a professor of international relations at Tokyo’s Meiji University.

Japan is also hoping more nations will take part in efforts to stop North Korea imported goods that are banned or limited under United Nations sanctions including fuel, advanced technologies and luxury goods.

The existing members of the organization include Australia, Canada, New Zealand, the UK and the US. Japan’s membership would give the group a strategic geopolitical position in the northeast Asia region.

Britain has already dispatched a number of warships to the Far East in recent years, including HMS Albion, which carried out joint amphibious assault exercises with Japanese units in 2018.

London is also lobbying for Japan to cooperate with British aerospace companies for the design and construction of a next-generation fighter jet for the Japanese Air Self-Defense Force.