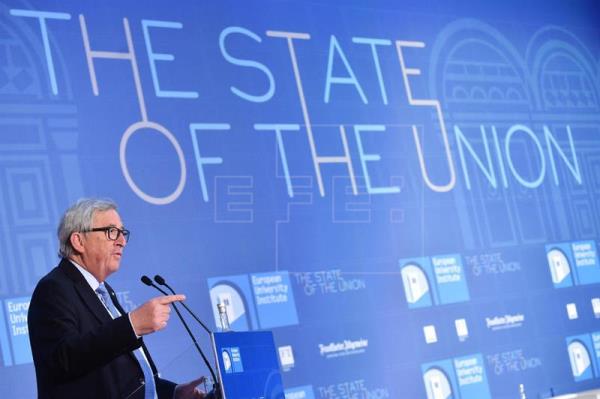 As anticipated in recent weeks, trade topped the Juncker Commission’s priorities for the rest of its mandate.

In his State of the Union address in Strasbourg on Wednesday (13 September), European Commission President Jean-Claude Juncker mentioned the strengthening of the trade agenda as his number one initiative.

“Today we are proposing to open trade negotiations with Australia and New Zealand,” he said.

“Europe is open for business. But there must be reciprocity,” Juncker insisted. “We have to get what we give.”

He was referring to concerns about investment by China and to his intention of seeking powers to screen foreign takeovers in Europe’s strategic sectors. French President Emmanuel Macron, backed by Germany and Italy, has asked Brussels to draw up a strategy to counter a wave of takeovers by Chinese companies in Europe.

Germany was particularly concerned by Chinese’s acquisitions in the tech sector, like the household goods maker Midea’s takeover of industrial robotics firm Kuka last year. There is a risk of intellectual property being transferred to foreign countries, while European companies struggle to access markets in those same countries.

“We are not naive free traders. Europe will defend its strategic interests with an EU framework for investment screening,” Juncker said. “If a foreign, state-owned company wants to buy a strategic port or part of our energy infrastructure… this must be done transparently, with scrutiny and debate,” Juncker continued.

This is why the Commission is proposing a new framework for investment screening, which would focus on improving coordination between national authorities to assess whether takeovers in sensitive industries such as the energy and high tech sectors raise security concerns.

A number of governments, including the Netherlands, the Nordic countries and Greece, are against screening for fear it could become a barrier to new investments.

The Commission is also seeking an agreement with MEPs and member states on new anti-dumping rules to protect European industry from production distortion, especially in China.

Juncker has reiterated many times over the past months that trade is one of the tools that can lift the European economy and create new jobs.

He repeated today that trade is not something abstract, it has created new opportunities for businesses big and small. “Every additional €1 billion in exports supports 14,000 extra jobs in Europe,” he added.

Over the past months, the European Commission has tried to counter growing criticism on closed-door negotiations by ushering more transparency in talks. Such change seems to have mellowed the discontent and created a new momentum, shifting public opinion in favour of trade.

In a recent Eurobarometer, 73% of Europeans said they had a positive view on free trade, while 62% agreed globalisation is an opportunity for economic growth. However, 63% said globalisation has increased social inequalities.

“Trade is about exporting our standards, be they social or environmental standards, data protection or food safety requirements,” Juncker insisted.

But some European countries seem to be hitting the brakes, so it remains to be seen how forceful his push on trade will be.