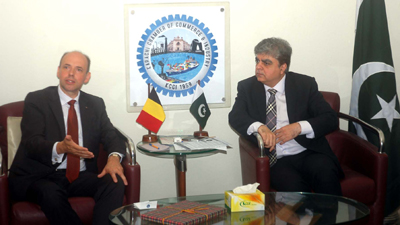 KARACHI: The Karachi Chamber of Commerce and Industry has urged that Belgium, being the capital of Europe and centre of European politics and policy making, should support the efforts for signing free trade agreement (FTA) between Pakistan and European Union.

Exchanging views with the Ambassador of Belgium to Pakistan Peter Claes during his visit to KCCI, Haroon Agar articulated that Pakistan is endeavouring to achieve GSP Plus status in European Union and Brussels’s support in this regard is imperative.

He appreciated Belgium’s consistent support for grant of Autonomous Trade Preferences for Pakistan in EU in the wake of devastating floods in Pakistan.

He stated that keeping in view mounting economic crises in Europe there is need to develop close ties between European countries and Pakistan to get mutual benefits.

He also proposed signing of MoU between KCCI and Brussels Chamber of Commerce to enhance exchange of trade information, trade delegations.

Pakistan and Belgium maintain healthy bilateral relations with each other as both the countries are engaged in bilateral trade of goods and services.

The export volume of Pakistan to Belgium reached $ 420 million while imports amounted to $ 354 million in 2012. Belgian expertise in engineering, automobile sector, chemicals industry, crystal and glass products, electrical and electronic sector is well known around the globe.

There are good prospects for undertaking joint ventures in Pakistan with the help of Belgian experience and technical know-how in a number of fields.

Agar highlighted the important role of KCCI in socio-economic development of Pakistan and to promote trade and industry in Karachi and elsewhere.

He also requested the Ambassador to invite Belgian exhibitors to participate in KCCI annual "My Karachi : Oasis of Harmony" exhibition scheduled to be held in July 2013 which is a showcase and B2B and B2C platform wherein local and foreign exhibitors participate.

He assured the Karachi Chamber’s best support and cooperation for match-making Belgian companies with their Pakistan counterparts.

Ambassador of Belgium to Pakistan, Peter Claes said Belgium and Pakistan have cordial political relationship. However, he said, bilateral trade is not aligned with the existing trade potential between two countries.

Countries around the world have yet to discover the strength of Pakistan as a country with lot of potential and strengths.

He stated that Belgium is the 5th largest exporter and its exports to Pakistan in 2012 were $ 800 million whereas total volume of bilateral trade between Pakistan and Belgium is around $ 800 million.

He commented that new foreign investment is not coming to Pakistan owing to negative perception of the country around the globe which needs correction. The Western media depict an unfair picture of Pakistan abroad based on individual events.

Positive news about Pakistan hardly come in the media.

He voiced that the tendencies and feelings of the business communities should be fairly conveyed and communicated. He advised the Belgian businesspersons to trust their Pakistani counterparts for their business trips as the on-ground situation is different as compared to that portrayed in the media.

He underlined the need for people-to-people contacts for enhancing reciprocal trade between the two countries, adding that economic integration, exchange of delegations is imperative.

The Belgian Embassy is working to make the business visa procedures more easier to facilitate businesses.

The envoy appreciated continuation of democratic system in Pakistan and hoped the elections will be conducted peacefully.

Democracy in Pakistan achieved a landmark with completion of 5 years by the last government.

He was of the view that developing countries should accord importance to the economy as the backbone of the country. Economic development is crucial to eliminate extremism.

KCCI’s activities for socio-economic development of Pakistan and in promotion of trade and industry are important, the envoy said.

Commenting on the attainment of GSP Plus by Pakistan in EU, he said that Brussels believes in free and fair trade.

Pakistan has already applied for GSP Plus in EU. The Pakistan Embassy in Brussels should be proactive in this regard to present the Pakistani case, he opined.

As Ambassador of Belgium to Pakistan, he said that he will communicate all the positive moves and strength of Pakistan to the authorities in Brussels. He apprised that Belgian companies have shown interest in agriculture sector, ports development, infrastructure development, oil and gas exploration. Being aware of the energy needs Belgium can offer Pakistan its help in LPG/ LNG terminals, oil and gas exploration.

He opined that Pakistan’s regional trade is highly encouraged, particularly with India and other regional countries. With stability in Afghanistan Pakistani products may easily reach the Central Asian Republics.

Prospects are available in economic and commercial cooperation between Belgium and Pakistan, he said.