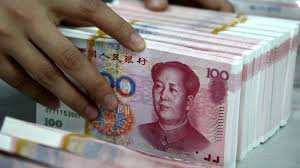 The Korean government and financial institutions are planning to more than double the ratio of yuan-based trade settlements next year after the conclusion of the Korea-China FTA. The government’s long-term plan is to raise the ratio to at least 20 percent. The ratio was just 1.2 percent last year, when Korea recorded a trade value of US$228.8 billion with China.

Under the circumstances, expectations for new business opportunities are on the rise. Korean banks are releasing an increasing number of yuan-based products one after another ahead of the opening of the won-yuan trading market next month. For example, Korea Exchange Bank has launched a yuan-based loan, and Woori Bank and Shinhan Bank have released yuan deposit products. These provide annual interest of at least 3 percent, while most of deposit and savings products are limited to less than 3 percent. According to the Bank of Korea, the combined yuan deposit balance of residents in Korea reached US$21.7 billion as of the end of last month, US$1.35 billion up from a year earlier.

Stock market investors are also positive about the trend as of late. They are expecting that the Korea-China FTA will be an important breakthrough with the stock market drifting sideways due to the weak yen and Korean companies’ sluggish business performance.

Financial companies are anticipating that their direct business in the Chinese market will be allowed depending on the result of the following negotiations. The talks covering the financial sector were recently wrapped up, and additional specifics about the degree of opening of the sector are scheduled to be made available in December.

According to the Financial Services Commission, the groundwork for such business has already been laid through the previous negotiations. “The fact that the financial sector was put on the table as a separate chapter means that we can look forward to some positive results,” it said, adding, “Also meaningful is the agreement on the clause on the local financial market transparency and the establishment of a new organization to help Korean financial companies’ troubleshooting their business in China.” Even if direct business is not allowed at this time, the transparency of the Chinese financial industry can be improved, and the extent to which the market is opened can be increased so that Korean commercial banks can better penetrate the market.

“We are planning to start sales activities in China next month after the local authorities’ final permission,” Hana Financial Group Chairman Kim Jeong-tae explained on Nov. 11, continuing, “We are going to completely localize the sales channels, which will be headed by the Chinese.” At present, Hana Bank and the Korea Exchange Bank are running 14 and 15 chain and branch banks in China.