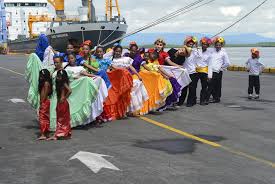 The Korea-Central America FTA took effect on Oct. 1, as the initial effectuation with Honduras and Nicaragua. The deal with the other three will be implemented after ratification by their legislatures.

Through the latest deal, Korea expects close cooperation in the ocean cruise tourism sector by seeking to actively participate in revamping infrastructure involving terminals around the Caribbean.

The Ministry of Oceans and Fisheries has already held a series of talks with its Nicaraguan counterpart to improve harbor conditions to attract global cruise ships.

Coffee imports to Korea are are expected to increase, while the nation’s carmakers and cosmetics producers are preparing active outbound shipments to the region.

Officials at the Government Complex Sejong said with this deal Korea would have the upper hand in the emerging markets over China and Japan.

The Korea Institute for International Economic Policy estimates that the FTA would lead to a 0.02 percent increase in the nations gross domestic product over the next decade.

Simultaneously, the Ministry of Trade, Industry and Energy is making all-out efforts to reach a deal with four South American countries — Brazil, Paraguay, Uruguay and Argentina — which are members of the economic bloc dubbed Mercosur.

Korea and the Mercosur countries — which agreed to start negotiations in May 2018 – have held three rounds of talks, the latest in July 2019.

When they started negotiations, both sides underscored that “a commercially meaningful agreement presents mutual benefits.”

They said in a joint statement that “strengthening ties through enhanced trade and investment flows is an expression of our shared interest in prosperity and shared commitment to trade liberalization and open markets.”

The Korean delegation is seeking greater market access in all areas, including goods, services, investments, e-commerce, and removing technical barriers to trade. 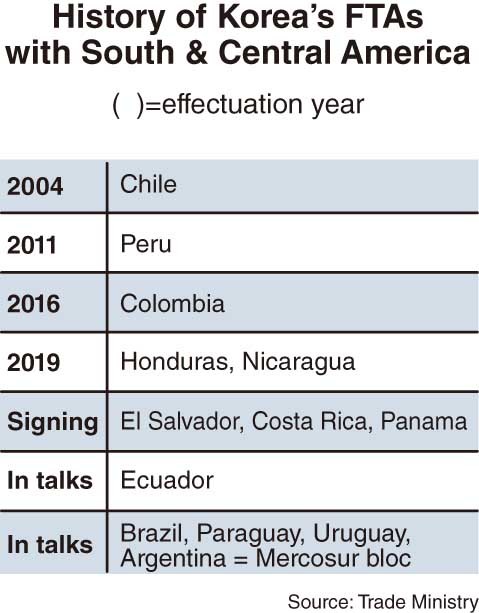 Brazil and Argentina, in particular, are ranked fifth and eighth by land size — whose combined territories outstrips that of Canada, the world’s No. 2.

The two are the world’s ninth-largest and 25th-largest economies based on GDP, while Uruguay (76th) and Paraguay (89th) are also drawing close attention as emerging trade partners.

The collective population of the four Mercosur countries came to 264 million this year as Brazil is the world’s sixth with 211 million and Argentina, 31st, with 44.7 million.

Regarding talks for a deal with Mexico, Korea’s Trade Minister Yoo Myung-hee has mentioned there has been little progress despite efforts for a consensus.

She said that Korea is “pushing for enter as a quasi-member of the Pacific Alliance, which has the similar effect of signing an FTA with Mexico.”

The Pacific Alliance is a trade bloc — composed of Mexico, Chile, Peru and Colombia — launched in 2012. Its combined population and GDP come to 210 million and $2 trillion, respectively, as the world’s ninth-largest continental bloc.