Two decades after coming into being, the World Trade Organisation (WTO) – one of the flag bearers of globalisation and neo-liberalism – is facing an existential crisis that is precipitated by the same group of people who created it. This is also happening at a time when peasants and indigenous people are several degrees worse off than they were two decades ago; with their land, rivers, oceans and forests having undergone massive erosion and forced evictions are inflicted upon them by profit hungry corporations. Local peasant markets and food systems in several countries have been decimated by an order of international trade that only looks at commodification of everything, including the food that people eat. 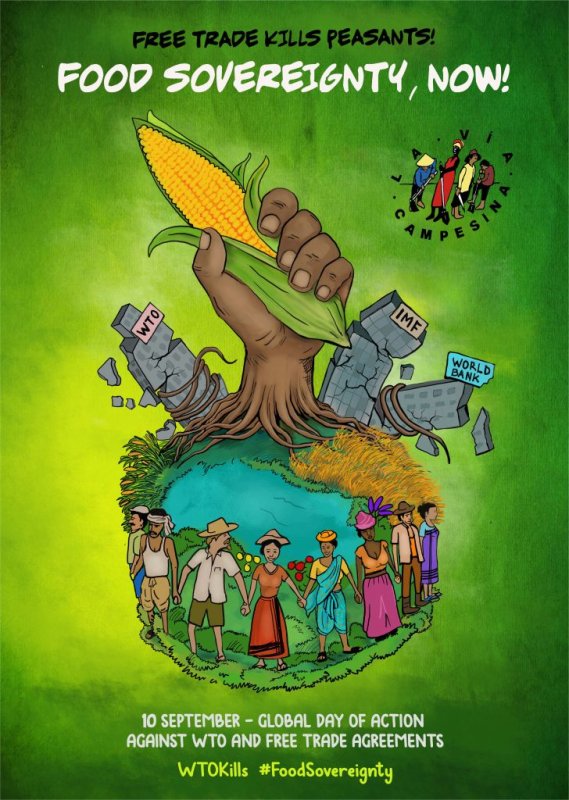 For an organisation that inscribed among its founding objectives, its aim “to help developing countries benefit fully from the global trading system”, WTO’s greatest indictment has indeed come from the following realities confronting the developing world today; rising rural unemployment, rising hunger, staggering levels of inequality that exists between countries and within countries, and rising per capita world debt.

La Via Campesina has long been warning the world of the risks of deregulation and unbridled expansion of global capital. As people working in the field to feed 70% of the world’s population, we were the first to face the brunt of free trade agreements that were pushed forth by WTO and other multilateral institutions. WTO led the pack in seducing and coercing our governments to sign up to the grand plans of a few rich countries. The devastation caused by this top down model of global governance was first felt in our territories when it crashed the prices of our produce, destroyed local peasant markets, wiped away the rich biodiversity that existed in our fields, took away our autonomy over seeds and evicted millions of our sisters and brothers from their territories.

It is this destruction of the country side that forced one of our own, Lee Kyung Hae from South Korea, to take his life outside the venue of the WTO ministerial meeting in Cancun, Mexico in 2003. On the 10th of September that year when he committed this tragic act, he had a banner that hung around his neck which read “WTO Kills Farmers”. Once a self-sufficient rice farmer in rural Korea, Lee had lost everything to cheap dumping of imported rice and meat, the result of free trade agreements pushed through WTO. He took such an extreme step because the rich and few who ran these institutions or lobbied around them, were too far away from the lived realities of the countryside. His act of sacrifice brought the depressing account of the rural world right outside their gates, even as in his last moments he bravely echoed the demands of peasants and rural communities worldwide; “to keep agriculture out of WTO’s free trade negotiations”.

Since then, La Via Campesina marks 10th of September every year as the International Day of Struggle against WTO and Free Trade Agreements – to keep the memory of Lee Kyung Hae alive and also to not remain mute to the calamitous consequences of international free trade.

16 years hence that tragic incident, what has changed? Nothing, except that the hands that feed WTO is now refusing to continue. It is ironical when the rich captains of capitalism claim that they got a bad deal from WTO. It begs the question, “then who got the good deal?” .

But let us not be fooled by this charade of false threats made by rich western countries to withdraw from WTO. What we have been seeing over the past one decade is the establishment of several bilateral and regional mega-free trade agreements and creation of newer unified trade blocks.

So while WTO may eventually be weakened or be dead, capitalism wants to continue to thrive through other means. It goes by different names in different continents.

Regional Comprehensive Economic Partnership (RCEP) comprising ASEAN nations, India, Australia and New Zealand is one among this new age trade agreements that wants to create a unified market in the region, being negotiated ‘outside of WTO’. Peasant organisations here have been pointing out how it could severely impact their livelihoods, particularly those of small scale dairy farmers, how it could impose restrictive seeds laws and more. Yet these negotiations continue behind closed doors in the most opaque ways possible led by a few who have never held a plough in their hands!

The EU – MERCOSUR deal between Europe and the economic and political bloc comprising Argentina, Brazil, Paraguay, Uruguay, and Venezuela, under negotiations for 17 years and finally signed onto by the European Commission in July this year, is another case in point. European Coordination of Via Campesina (ECVC) had warned that the deal with MERCOSUR threatens to undermine standards on health, the environment and animal welfare in the European Union, in addition to lacking any policy coherence with the tall promises made at COP 23. Peasant organisations in the MERCOSUR block calls it a neocolonial model that will result in a capital concentration for the few and poverty for the majority.

In Africa, the creation of African Continental Free Trade Agreement, a mega regional free trade agreement, is ‘premised on the notion that trade liberalisation, through both tariff and non-tariff barrier reduction, will drastically increase intra-continental trade, and that this increased trade will be beneficial for all.’ [CADTM, 2019]. Nothing can be farther from the truth.

Farmers organisations in Canada have also called out U.S.-Mexico-Canada Agreement (USMCA, earlier known as NAFTA) for failing to address the concerns of grain farmers and dairy farmers in the country.

The Comprehensive and Progressive Agreement for Trans-Pacific Partnership (CPTPP) between Australia,Brunei, Canada, Chile, Japan, Malaysia, Mexico, New Zealand, Peru,Singapore, and Vietnam. has sown the fears of corporate capture of seed systems, dilution in the regulation for GMOs and serious worries for small-scale food producers.

Many, if not all, of these trade agreements carry within it the controversial provision of Investor-State Dispute Settlement” (ISDS), which in all instances invariably allow private corporations to override sovereign national laws and sue the national governments for threatening their profitability. A system that allows multinational private corporations to take a sovereign nation to trial in front of an opaquely set up international tribunal, for the ‘crime’ of choosing people’s welfare over profit is indeed a dangerous one and must be fiercely opposed.

REJECT WTO AND FTAs! MOBILISE FOR A PEASANT-LED ALTERNATIVE!

It is in this vein that La Via Campesina is calling upon its members and allies to not be misled by the smokescreen of a ‘weakening WTO’ and be aware of the new age mega and bilateral free trade agreements are equally if not more harmful.

As we remember Lee Kyung Hae this September, let us also agitate, educate and organise the rural members of our movement and our allies about the lurking dangers of these closed room trade negotiations. It is important that we reject all kinds of free trade agreements and work towards the complete dismantling of WTO as it prepares to meet for the next Ministerial in Kazakhstan.

It is important to inform the people of peasant-led-alternatives that exist, which can feed the people and also save the planet. The UN Declaration on Rights of Peasants and Other People Working in Rural Areas (UNDROP), which our movement won through 17 years of hard fought negotiations, are an instrument to protect the rights of our people and our efforts must be to have it implemented in our countries.

It is vital for our movements to promote and strengthen the local peasant markets selling locally produced food using agroecological methods to local customers, and that which represents and respects the diversity of local food systems. We demand for national policies that strengthen these peasant market systems and reject free trade agreements that pose an existential threat to it.

It is important that our movements on the ground also support the Global Campaign for a UN Binding Treaty for Transnational Corporations on Human Rights that aims to end the impunity of transnational corporations and work to strike out the controversial provisions of ISDS from all free trade agreements.

Starting 10 September, we are exhorting the 182 peasant organisations of La Via Campesina in 81 countries, all our allied social movements, academic institutions, political schools of training and NGOs to organise direct actions, public events, study sessions and demonstrations to expose the dangers of these free trade agreements in your own region and countries and also to present an alternative that is rooted in local cultures, context and biodiversity.

Let the rallying call for our global actions once again be

“WTO, FTAs Out of Agriculture and Food!”

Send the details of your planned actions to [email protected] or share it on Social Media with the hashtags #WTOKillsPeasants #FoodSovereigntyNow. Follow our Facebook Pageand Twitter Page for cartoons and official posters for 2019 that will be launched during the week. To download posters from our archives, click here and to make your own posters, try this link.