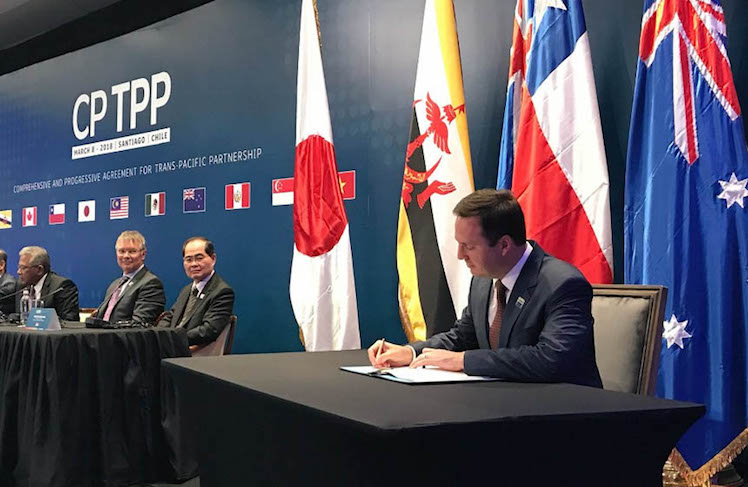 Bad for workers, bad for taxpayers, bad for the environment, bad for Australia. The latest iteration of the Trans-Pacific Partnership is a boon for multinational corporations, writes Patricia Ranald. They might have rebadged it with a sassy name but this trade deal is a gift for Big Pharma and other global titans merely masquerading as free trade.

The government is peddling a series of myths about the TPP-11, myths which are repeated in its Joint Standing Committee on Treaties report (JSCOT) which was released today.

Myth 1: The TPP-11 is a different and better version of the TPP-12 from which the US Trump administration withdrew two years ago, because some clauses have been suspended and it has been rebadged as the “Comprehensive Progressive” TPP.

Fact: Only 22 clauses, mostly about medicine and copyright monopolies, have been suspended out of 30 chapters, but these clauses remain in the text, pending the US rejoining the agreement.

Many of the them involve giving pharmaceutical companies an additional three years of data protection monopolies over expensive biologic medicines, used to treat cancer and other serious illnesses, which would delay the availability of cheaper versions of these drugs, and cost our public health system hundreds of millions per year.

Most governments never wanted this US policy and only agreed to it in order to get access to the US market. Pharmaceutical companies, which are the most profitable in the world, already have 20 years of monopoly plus five years of data protection on new medicines in Australia.

The extra three years of monopoly could be revived if the US decides to re-join the agreement.

Australia has never before signed an agreement containing essentially unacceptable suspended clauses that could be resurrected in future.

Myth 2: Australia must support the TPP-11 as a symbol of free trade against the rising global tide of protectionism

Fact: Even with the suspended clauses, the TPP-11 text still entrenches existing medicine and copyright monopolies in an international agreement, making it more difficult for governments to reduce them in future.

The Productivity Commission has correctly argued that it may be desirable to reduce such costly monopolies in future, and that using trade agreements to entrench monopolies is the opposite of free trade.

Most of the TPP-11’s chapters give greater rights to global corporations that already have enormous market power, while reducing the ability of governments to regulate them in the public interest.

All trade agreements have government-to-government dispute processes. But the TPP-11 also gives special legal rights to individual foreign companies to bypass national courts and sue governments for compensation in unfair international tr.ibunals if they can argue that a change in law or policy harmed their investment. This known as Investor-State Dispute Settlement (ISDS).

Australia’s experience of being sued by the US Philip Morris tobacco company using an obscure Hong Kong investment agreement to claim compensation for our plain packaging legislation has meant that tobacco regulation alone has been clearly excluded from ISDS cases in the TPP-11.

But the necessity for this specific tobacco exclusion shows that the weak general “safeguards” in the TPP-11 will not prevent cases against other public interest regulation, which governments will have to defend.

Even when governments win such cases they lose a lot. It took over four years and $39 million in legal fees for the ISDS tribunal to find that Philip Morris was not a Hong Kong company. There are now over 850 known cases, with increasing numbers against health, environment and even indigenous land rights law and policy.

Less well known is the impact of the trade-in-services chapter and related chapters which restrict the ability of future governments to regulate essential services and to restore regulation in the event of the failure of deregulation or privatisation.

These chapters treat regulation of services as if it were a tariff to be frozen at existing levels, and not to be increased in future, known as the ratchet structure. All services are included unless specifically exempted. The exemptions only apply to government-to-government disputes. They do not prevent ISDS cases being taken on exempted services.

This structure ignores the need for democratic governments to respond to changed circumstances like the re-regulation of the financial sector following the global financial crisis, or indeed the current Royal Commission into the banks.

New forms of regulation are needed to reduce carbon emission levels and change energy markets in response to climate change. The ratchet structure can also prevent governments from re-regulating in response to privatisation failures.

For example, the dramatic failure of and deregulation and privatisation of vocational education services in Australia resulted in fraud against students and the government. The current government had to act to re-regulate the sector late in 2016. If the TPP had already been implemented, without very specific exclusions for private vocational education services, the ratchet structure could have prevented such re-regulation.

Even if such exemptions existed for government-to-government disputes, they would not have prevented ISDS disputes. A private vocational education company from a TPP country could have argued that the value of its investment had been reduced by re-regulation, and could have launched an ISDS case for compensation.

Myth three: The TPP protects workers’ rights and the environment

Fact: The TPP-11 increases the numbers of vulnerable temporary migrant workers from TPP countries and removes the obligation to test if local workers are available. These temporary migrant workers have less rights than permanent migrants because they are tied to one employer and can be deported if they lose the job, exposing them to super-exploitation, as revealed by numerous media reports, academic studies and parliamentary reports.

Fact: Australia already has free trade agreements with all but two of the TPP-11 countries (Canada and Mexico), so the additional market access for Australian products is very limited.

The government has refused to undertake independent studies of the economic, health, environmental and other impacts of the TPP-11 in Australia despite advice from key bodies like the Productivity Commission, public health and environmental experts.

These predicted tiny benefits have not been assessed against the cost of other impacts discussed above. The TPP-11 after US withdrawal includes Australia, Canada, Mexico, Peru, Chile, Japan, Malaysia, Singapore, Brunei, Vietnam and New Zealand.

The politics of it

The report of the government-dominated Joint Standing Committee on Treaties (JSCOT) on the Trans-Pacific Partnership (TPP-11) has predictably recommended in favour of the implementing legislation, with some critical comments by the minority of Labor members.

Community concern has also succeeded in getting a Senate inquiry, which will report on September 18. The government does not have a majority on this inquiry, and it is likely to be more critical. Community organisations are advocating for the Senate majority to reject the TPP -11 implementing legislation because it increases corporate rights at the expense of communities and the environment.

Dr Patricia Ranald is Convener of the Australian Fair Trade and Investment Network (AFTINET) and honorary Research Fellow at the University of Sydney.