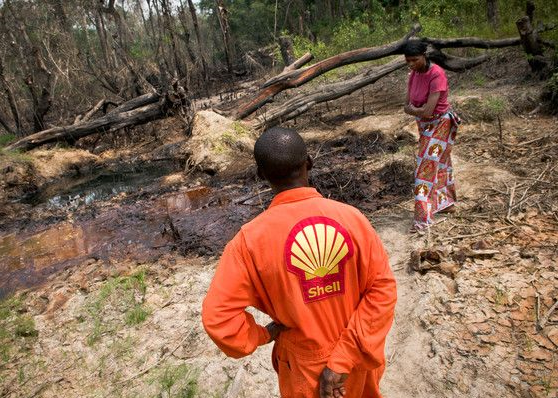 Confidential internal documents of Royal Dutch Shell suggest that the oil giant capitalised on the 2011 presidential election to arm-twist the federal government into a “cheap” deal over the sale of the disputed OPL 245.

The international oil company also used an arbitration case it filed with the International Centre for the Settlement of International Disputes (ICSID), an organ of the World Bank, to railroad the government into brokering truce between it and Malabu Oil and Gas Ltd, its estranged erstwhile partner and the original licensee.

The bundle of documents made available to TheCable also gave an insight into the mindset of Shell’s executives who toyed with the idea of paying nothing for OPL 245 the moment Eni of Italy, in negotiation with Malabu, showed interest in sharing operator rights with them.

Shell also knew it was underpricing the oil block, deliberately hoarding information on the gas potential of the field in all its valuations and focusing only on the oil.

The sale of the controversial block in 2011 has unfurled a chain of scandals and litigation, leading to an unprecedented approval by an Italian court for the prosecution of Shell and Eni executives over allegations of bribery.

OPL 245 was awarded on a discretionary basis to Malabu in 1998 by the Sani Abacha government, although it later turned out that the beneficial owners included Abacha’s son, Mohammed, and Dan Etete, then-minister of petroleum.

A discounted rate of $20 million was charged as “signature bonus” by the federal government to encourage local investment in the upstream sector of the oil industry.

While Sapetro paid its own signature bonus to the federal government in 1998, Malabu made an advance payment of $2 million before Shell — erstwhile technical partners to Malabu on the block — took it over following revocation by President Olusegun Obasanjo in 2001.

In 2002, Shell paid $210 million as signature bonus to the government but domiciled $209 million of the sum in an escrow account because of the dispute resulting from the revocation.

However, the payments were made to federal government’s account at JP Morgan in London before the transfer was made to Malabu, fuelling suspicion that the oil companies knew there was sleaze in the transaction and wanted to avoid being directly linked to it.

In the leaked documents, Shell consistently made reference to “the elections” as a bargaining chip, an indication that its executives knew that some of the proceeds would end up financing the 2011 presidential election.

President Goodluck Jonathan, who returned the oil block to Malabu in 2010 — nine years after it was revoked — was preparing to contest in the 2011 elections after replacing President Umaru Musa Yar’Adau who died in May 2010.

“The ambit claim emanating from Abuja is that the price to Etete is $2bln… However, in the lead up to the elections, we believe that a figure in the range of $1-1.2bln will be accepted,” a Shell document said.

Eni initially proposed a settlement formula of paying $800 million to Malabu for 50% stake in the block while asking Shell to pay the signature bonus of $210 million to government and another $165 million towards offering Malabu “an irrevocable offer” of $1.2 billion to part with the licence.

“The figure of $1.2bln to Etete is considered the minimum figure acceptable in Abuja,” the document said, obviously insinuating that the government was working for, or with, Etete.

Shell had previously denied knowing Etete was part of the deal but recanted after being confronted with documentary evidence.

Meanwhile, Shell did not want to pay more than the signature bonus, claiming to have spent over $500 million on drilling four wells before the re-award of the block to Malabu following a 2006 out-of-court settlement with the federal government.

In the documents seen by TheCable, the imminent decision of the arbitration panel was a key factor in Shell’s decision to play hard ball, although the company also noted that the case could harm its relationship with the federal government.

In 2002, Shell Nigeria Ultra Deep Ltd (SNUD), the special vehicle floated by Shell, had signed a production sharing contract (PSC) with the Nigerian National Petroleum Corporation (NNPC) for oil exploration after the revocation of Malabu’s licence.

But Malabu headed to court seeking to nullify the revocation, and the federal government eventually reached an out-of-court settlement with the company to return the block.

Dissatisfied, Shell decided to file for arbitration at ICSID, claiming that Nigeria had violated the terms of a Nigeria-Netherlands Bilateral Investment Treaties (BIT) signed in 1994 by “expropriating” its asset in the PSC with NNPC.

ICSID was about to rule when Shell withdrew its case as part of the final settlement of the dispute in 2011.

In the “OPL 245 Brief” prepared by Shell for inside consumption, the company had expressed confidence that it would win in arbitration.

“We believe we will be successful (70% POS), which results in a cash award in favour of SNUD, payable by/enforcebale against the FGN,” it said.

“The case presentation from the external counsel and witnesses went very well and the demeanour of the panel showed a keen appreciation of the issues at stake,” the brief read.

In a document marked “Group Investment Proposal” also seen by TheCable, Shell said while the legal case “is considered strong, it is not without risks… continued arbitration will be a significant impediment to Shell’s ability to improve relations with FGN across the breadth of business activities in Nigeria”.

Mohammed Bello Adoke, then-attorney general of the federation who was in the thick of the legal work, had said in an interview that Nigeria was at the risk of being slammed a $2 billion fine by the ICSID if a final resolution was not reached in 2011.

He said: “After the (re)issuance of licence (in 2010), Malabu was expected to pay the signature bonus within a period of 180 days. While Malabu was going around looking for technical partners because they were not ready to deal with Shell again, Shell, relying on its dominant position in the industry, issued a caveat to other IOCs that it had interest in OPL 245.

“This prevented other IOCs from pursuing their own interest in the block or entering into a working relationship with Malabu. As a result, Malabu could not move forward, and neither could Shell. Indeed, Shell was trying to claim over $2 billion from the federal government.”

Adoke, who is now on self-exile, has been charged to court in absentia for his role in the agreement.

He has denied allegations of graft, maintaining that Mohammed Abacha — who is in dispute with Etete over ownership of Malabu — was using the authorities to persecute him.

The former AGF said: “After [the deal] was done, Mohammed Sani Abacha came up from nowhere and [said] that when this money is paid, we should make sure that they were also paid for their interest. And I said to them… this is a shareholder issue. Why don’t you people call a meeting of the company? If there is no agreement between you people, go to court to find a way out. That was where the problem started for me.”

The Economic and Financial Crimes Commission (EFCC) accused Adoke of collecting a $2.2 million bribe over the OPL 245 transaction, but the former minister has denied the allegation, maintaining that the transaction being given as evidence was a mortgage he took from Unity Bank Plc in 2013 — two years after the Malabu deal was done.

“How can I wait for two years to collect a bribe if indeed I collected a bribe?” he said.

Beyond the allegations of sleaze, however, documents also show that the oil companies were well aware of the enormous value of OPL 245.

Shell already had inside knowledge of the richness of the oil field, having served as technical partners to Malabu when the licence was first awarded in 1998.

In the “OPL 245 Brief”, Shell valued the Malabu block at $3.2 billion based on a crude oil price of $80, taking into account contractor rights ($1.9 billion) and concessionaire rights ($1.3 billion).

In its scenario-painting on dispute resolution after the long-drawn battle, Shell foresaw a situation in which it would share the operator rights at 50:50 with Eni of Italy, who were late entrants into the deal.

Malabu reportedly did not want to negotiate directly with Shell because of previous acrimony and allegations of betrayal after the revocation of the block in 2001.

The documents indicate that Shell was seeking to take full advantage of the situation, even proposing at some point that its $210 million signature bonus payment — which had been warehoused in an escrow account since 2002 — should be “recoverable”. This means a refund by the federal government when oil production starts. Shell would have eventually paid nothing to own 50% of the block.

The brief said: “[Our] position is to maintain that Shell contribution over signature bonus is $0. That a settlement proposal is made to Etete based on ENI payment + Signature bonus alone. ENI then forced to make assessment of whether they add more to increase likelihood that Etete accepts. Once offer is made it will clearly test Abuja appetite for short term cash. At this point we expect renewed pressure on Shell to add cash.”

Shell’s appetite for a hard bargain, in the hope that the oil block would be sold cheaply, contrasted with its analysis of OPL 246.

The brief said: “In 2006, Danjuma entered into a SPA with CNNOC. Whilst the structure of this is somewhat complicated in essence:

“Based on the above, indicatively the CNOOC purchase valued contractor rights at $3.9bln and total block at $7.9bln. Combining equity retained (with a carry) and cash received, Danjuma has value from the block of circa $2.3bln.”

It even said in the brief that “Abuja” believed Etete/Malabu should get $2 billion (and not $1.1 billion) for OPL 245 “based on the OPL246 benchmark”.

Brinded described OPL 245 as “a must win”

The internal group investment proposal revealed the reasons behind Shell’s mindset on OPL 245.

The proposal made a strong case for the oil block, describing it as “a key building block” in Shell’s aspiration in offshore Nigeria “with significant strategic ‘hub’ value”.

“This project has been identified as a must win,” according to the document, signed by Malcolm Brinded, Royal Dutch Shell’s then-second-in-command.

Shell knew what it was saying.

TheCable understands that before the award of the block by Abacha, his son had contracted Shell to conduct the seismic study, and this inside knowledge apparently propelled the oil giant’s desperation for it despite the political complications.

While it even had more gas than oil — about 600 million barrels equivalent — the negotiation valuation was based on oil only.

It is believed that the seismic study estimated that the field could contain up to nine billion barrels of crude oil — which, if proven, would inflate Shell’s bookable reserves by about 30% and significantly shoot up the share value of the IOC.

There is a sense which Shell could argue that undervaluing the block and using strong-arm tactics to get the dispute resolved were within its business interests and there was nothing criminal about it.

But the allegations of sleaze bother on governance ethics for which the corporate world is eager to see the outcome of what Global Witness, the international anti-corruption organisation that has been pursuing the case since 2013, calls “the biggest corporate trial in history”.