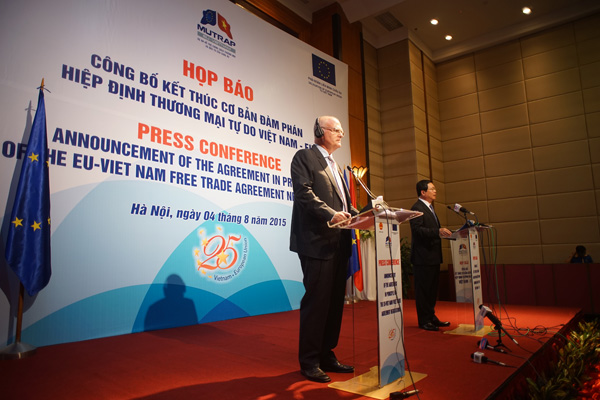 Hanoi (VNA) – Vietnam and the European Union (EU) have finished the legal review process for their free trade agreement (FTA) and reached agreement on the entire of the bilateral investment protection deal, announced Vietnamese Minister of Industry and Trade Tran Tuan Anh and EU Commissioner for Trade Cecilia Malmstrom.

The two sides had a successful meeting on the FTA, and will sign it soon, Minister Anh told the press after working session in Brussels on June 25.

He thanked the EU for its cooperation, expressing his hope that the two sides will continue collaborating closely in the future.

For her part, Malmstrom stated that the EU and Vietnam will process the ratification and implementation of the FTA as soon as possible.

Minister Anh and Malmstrom agreed to propose agencies of both sides to officially sign and ratify the FTA and the agreement on investment protection.

At the session, the two sides also discussed cooperation plans to ensure the best conditions for the growth of economic and trade partnership between the two sides, with the EU supporting Vietnam in enhancing capacity to optimise the deal after it is implemented.

The support will help Vietnam continue building its legal system, assisting the implementation of commitments in the FTA and raising competitiveness of small and medium-sized enterprises, thus strengthening trade and investment collaboration.

Regarding challenges, Minister Anh said that by March 2019, Vietnam will work to win support from members of the European Parliament (EP) for the ratification of the deals.

Rising trade protection, along with unilateralism as well as hindrance against the signing and ratification of the FTA are challenges that both Vietnam and the EU have faced, he noted, adding that Vietnam and the EU will continue working closely to ensure the success of their shared goals.

The same day, Minister Anh met with Bernd Lange, Chairman of the EP Committee on International Trade, who showed support for Vietnam’s proposals, especially in focusing EU resources to ensure the signing of the FTA by the end of 2018, so the EP can approve it in early 2019.

Minister Anh also met CEOs and leaders of European enterprises and business associations, during which he detailed the outcomes of his working session with Malmstrom and introduced the investment and trade situation in Vietnam.

Legal reviews for Vietnam-EU FTA started after negotiations on the deal concluded on December 2, 2015. However, the EU changed its regulations on the process of approving FTAs, with the division of contents related to investment protection and investor-state dispute settlement into a separate deal called Investment Protection Agreement (IPA).

The EVFTA and IPA have been processed while the Vietnam-EU partnership has been expanding, especially in economy and trade.

The EU is now the third largest trade partner of Vietnam and one of the country’s two biggest export markets. Two-way trade grew 12 times to 50.4 billion USD in 2017 from only 4.1 billion USD in 2000.