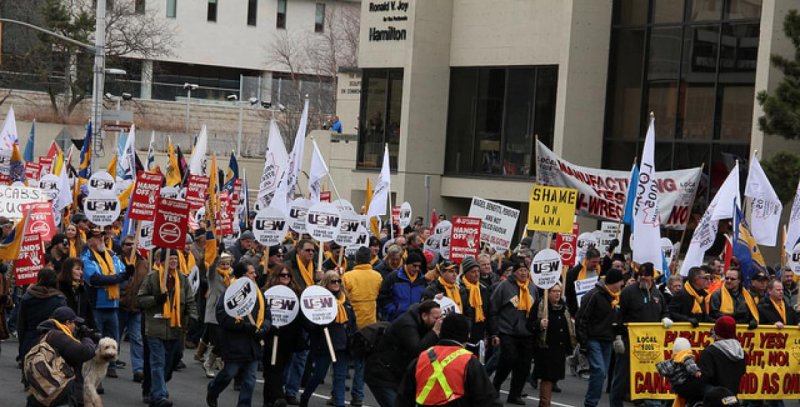 "The Liberal government is set to fast-track Canada’s inclusion in the TPP, while most Canadians know little about the impact of this secretly negotiated trade agreement," said United Steelworkers (USW) National Director Ken Neumann.

"The TPP is first and foremost a corporate-rights deal for multinationals. It will worsen inequality, further erode Canada’s manufacturing and industrial base, It will eliminate more middle-class jobs, increase drug prices and drive down wages, working conditions and environmental standards," Neumann said.

"Ramming through this trade deal is a betrayal of the trust of Canadians who believed the Liberals’ criticisms of the former Conservative government’s secret TPP negotiations and the profound implications," Neumann added.

"Once they gained power, the Trudeau Liberals ran with the TPP ball. They signed a deal that enhances the rights and powers of global corporations, at the expense of Canadian jobs and labour, human rights and environmental standards," he said.

"The Liberal government never even bothered to conduct a comprehensive analysis of the TPP’s potential impact on Canadian jobs – perhaps because this deal will deliver pink slips to thousands of Canadians. Independent analysis shows the agreement will kill more than 50,000 Canadian jobs," Neumann noted.

"The TPP is a particular threat to our auto and steel sectors, skilled trades and dairy farmers. It will give more rights and power to multinational drug manufacturers to increase our medication costs that are already the second-highest in the world," he said.

"The TPP gives multinational corporations the power to sue our government for millions of dollars by challenging Canadian laws and regulations that protect our environment, food safety and other public interests. And Canadians have no recourse to oppose such challenges, which are heard in unaccountable, secret tribunals headed by international trade lawyers," he added.

"The TPP was a bad deal when it was negotiated by the Conservatives in 2015 and it’s a bad deal now, despite the Liberal government’s push for a cynical change to the agreement’s official name," Neumann said. He was referring to the Trudeau government’s insistence that the TPP be renamed the Comprehensive and Progressive Agreement for Trans-Pacific Partnership (CPTPP).

"The CPTPP is a ’progressive’ trade agreement in name only," he said.