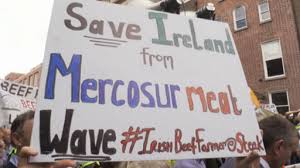 Majority of Europeans against EU-Mercosur deal

A new poll shows that the vast majority of Europeans oppose the EU’s trade deal with the South American bloc Mercosur.

The deal between the EU and Mercosur - which includes Argentina, Brazil, Paraguay and Uruguay - was signed on 28 June after 20 years of talks.

The group of countries are set to increase their exports of beef, sugar, poultry and other farm products.

But criticism of the trade deal is growing, with opponents mainly highlighting the potential associated impacts it may have on the cost of beef and deforestation in the Amazon.

A new YouGov poll, commissioned by consumer group SumOfUs, reveals that the overwhelming majority of citizens in EU member states want to call the deal off.

Conducted between September 13 to 25, over three-quarters of respondents (82%) said the trade agreement should be stopped.

Numerous European governments have expressed concerns that the Mercosur agreement will lead to further deforestation.

In September, Austria’s parliament voted to potentially veto ratification of the agreement.

David Norton, campaigns coordinator at SumOfus, said: “This poll proves that the vast majority of Europeans feel the same way: people don’t want cheaper beef at the cost of deforestation.

“The results of this poll should further encourage these governments to reject this trade deal that would be disastrous for people and the planet.”

The trade deal, which could be concluded as soon as the end of 2020, would vastly lower duties on beef and soybean exports from Mercosur countries to the EU.

These products have been linked to illegal rainforest clearing in Brazil, which has dramatically increased under president Jair Bolsonaro.

This clearing technique is believed to have caused the recent Amazon wildfires.