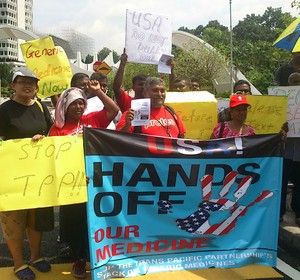 The statement below was released by the Socialist Party of Malayaia (PSM) on July 10.

The PSM is deeply concerned about the ongoing Trans Pacific Partnership Agreement (TPPA) free trade agreement. The 18th round is to commence in Kota Kinabalu in east Malaysia from July 15 until July 25.

Since its first inception as the United States-Malaysia bilateral Free Trade Agreement in 2006, the PSM has consistently protested the decision of the Malaysian government to enter into such negotiations. It was very clear since then, that the FTA is part of the agenda of US corporations to expand and control trade in the region.

Having failed to impose their interests via the World Trade Organisation, US corporations quickly lobbied Congress to start bilateral agreements with the countries in Asia.

Threatened by the growing economies of China and India, the US and European Union are competing to control trade for their respective interests. It is another form of imperialism that will negate our national sovereignty.

Now, after the fast track to negotiate the FTA during the Bush administration expired in 2007, the TPPA is a renewed approach for the same goals. TPPA is FTA on steroids.

In order to shield themselves from arguments that the US is the main driving force, now they call it a “partnership” of interested countries. The current TPPA participating countries are Malaysia, Australia, Brunei, Canada, Chile, Mexico, New Zealand, Peru, Singapore, Vietnam and USA.

It is obvious that the TPPA is to protect and enhance US corporate interests, where even the US Congress to date is in the dark about the contents of the negotiating text. On the other hand, all the 29 chapters prepared for negotiating were shared with key US corporations.

The PSM strongly feels that the TPPA negotiations must be discontinued at once by the Malaysian government because:

US pharmaceutical companies are insisting on extending drug patents, via expansion of patent protection for new forms, uses and methods of known substances. Thus minor variations on old drugs can be patented again for another 20 years, eliminating any possibility of cheaper generic drugs to be produced.

Even medical procedures carried out by surgeons will be patented, thus making such procedures available only to those who can afford it.

The Investor to State Dispute Settlement System gives extensive powers to corporations to sue governments that impose regulations on them, even though these corporations may be found to be destroying the environment or dumping toxic waste.

The governments will be forced to cut back on the health budget, due to the rise in medicine prices. The number of HIV patients receiving drugs from government hospitals will drop further.

Tariffs on imported products will be brought down to zero, thus making US products more competitive and cheaper than local products. The TPPA demands “fair and equal” treatment of foreign and local companies by participating governments.

Experiences from the North American Free Trade Agreement and trade liberalisation in Latin American countries has proven that such free trade agreements and lowering of tariffs will cause huge job losses and greater unemployment.

The TPPA will cause further worsening of labour standards as investors will resist any regulations or new laws to enhance workers’ benefits introduced by government. They will claim that their future profits have been expropriated and will threaten to sue the government, a right provided by the TPPA. Governments cannot insist on transfer of technology to the local workforce.

The PSM thus calls on the Malaysia government to immediately:

1. Halt all negotiations until the negotiating text is presented and debated , thus must be dealt with differently through parliament scrutiny. 2. Call for a referendum amongst the rakyat (people), to evaluate if they support the TPPA being signed. As it effects all Malaysians, it is only just and proper that the rakyat has to be informed of the content of the agreement and they decide on its benefit. 3. Make public all cost-benefit analysis (if any) done by the government ministries on how the TPPA will be beneficial to the rakyat.

The PSM has been aggressively campaigning to inform and educate the rakyat of the TPPA concerns. Together with unions and civil society, we will take our concerns to parliament and hand a memorandum to the government and the opposition, calling for the above three demands.

The PSM has no illusion about the true colours and intent of the TPPA/FTA as an agenda of US mega corporations. The US unions and people are also up in arms against the TPPA. The PSM stands firm in the insistence that we should stop the TPPA immediately and walk away from negotiations. Such agreements only benefit key Malaysian companies and not the 99% of the rakyat.