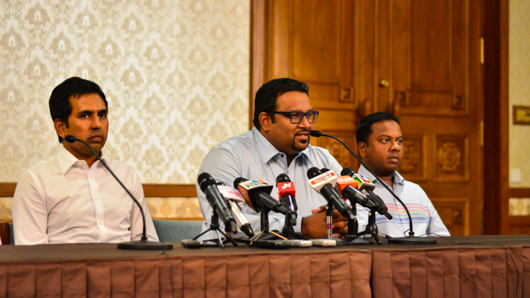 The free trade talks were initiated by the Maldives, according to Shareef.

The Maldives is to back a Chinese-initiated international finance institution to be called the Asian Infrastructure Investment Bank (AIIB) while confirming a free trade agreement was being pursued.

At a press conference today, the economic council revealed that the Maldives had requested to be included as a founding member of the proposed bank alongside the existing 21 countries, which includes both China and India.

The requests were put forward during a recent visit to China by the Economic Council where discussions were held with Chinese delegates on proceeding with Chinese-assisted projects, while the Maldives officially signed up to the Maritime Silk Road project.

The AIIB, which is to start up with a proposed US$100 billion capital, is purposed with financing infrastructure projects in the Asia Pacific region.

The bank has been described by some media outlets as having been set up with the intentions of increasing Chinese influence in Asia at the expense of the IMF, ADB, and the World Bank.

The economic council today confirmed that the Maldives has officially agreed to participate in China’s silk road trade route – the third country to do so, although Chinese state media has reported more than states as expressing interest.

The two countries have also agreed to engage upon free trade in the future, explained the council.

When questioned about the potential economic disadvantages which might occur because of a free trade agreement, Minister at the President’s office Mohamed Shareef said that both governments will make sure that the agreement leads to a ‘win-win’ for the countries.

“I want to mention that the free trade talks were initiated by the Maldives,” said Shareef. “China is willing to give us a lot of leeway into how we structure the agreement.”

The economic council also stated that work on the proposed new terminal at Ibrahim Nasir International Airport (INIA) is to begin in the next six to seven months and that the request for the loan to finance the project has been submitted to the Chinese Exim bank.

The council members also reiterated the importance of the proposed Malé-Hulhulé Bridge, saying that there is good progress and that the government is aiming to open it by the year 2017.