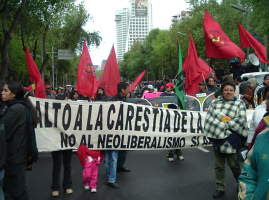 Mexican President Enrique Pena Nieto on Tuesday April 12 backed a planned free trade deal between the European Union and the United States known as the Transatlantic Trade and Investment Partnership (TTIP), saying his country could also adopt it.

During a visit to Berlin, Reuters reported, Peña Nieto said TTIP offered an opportunity for more free trade and added that Mexico, which is already part of the North American Free Trade Agreement (NAFTA) along with the United States and Canada, could also negotiate such rules with the 28-member EU.

“Regarding TTIP, the European Union and USA, I think it’s perhaps a chance to update the opportunities there are within the framework of free trade and Mexico could then also do it with the countries of the European Union,” Pena Nieto told a joint news conference with German Chancellor Angela Merkel.

He said Mexico had made efforts to sign more free trade agreements and that it was also currently negotiating to update a cooperation agreement it has with the EU.

Merkel praised Peña Nieto for not turning to protectionism and isolation despite falling oil prices that have hurt Mexico, an oil producer. She added that Mexico was a good partner for the EU and Germany.

Trade negotiations between Brussels and Washington are at a crucial point since both sides believe the TTIP stands a better chance of passing before U.S. President Barack Obama leaves the White House next January.

Advocates of TTIP say the accord would bring big benefits as it would unite half the world’s economy and remove barriers for small companies to do business.