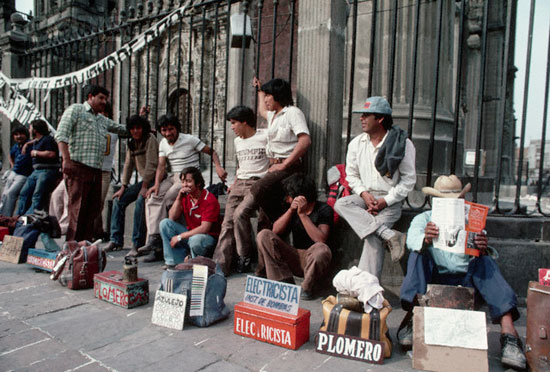 Freely translated by Anoosha Boralessa in March 2015 ; not reviewed or revised by bilaterals.org or any other organization or person.

Mexico : NAFTA has not created jobs for us

Tijuana – Dr Robert A. Blecker, a researcher of the Economics Department at the American University in Washington admitted that the North American Free Trade Treaty has not led to economic growth, much less to job creation in Mexico.

During a conference held at the Colegio de la Frontera Norte, Blecker evaluated the trade agreement focusing on its effects on employment and growth as well as Mexico’s economic relations with the United States and Canada.

He indicated that there is no room for doubt on its impact and its major change on Mexico : despite trade liberalization, NAFTA has failed to a) increase job creation ; b) increase the per capita income in relation to labour conditions in the other two countries. So the specialist on this subject explained.

He added that during these first two decades, these North American countries have integrated and are moving towards global trade liberalization policies. But he laid special emphasis on recent market regionalization. He explained that this is very positive and good for Mexicans.

He admitted that perhaps the most famous promise of the former president Salinas de Gortari was that Mexico would move into in the first world ; this would mean the convergence of the Mexican per capita income with the United States and Canada. However, there is no evidence that this has happened. He concluded that on the contrary, it has stagnated post NAFTA and post trade liberalization.

This academic has studied the FTA for the past 10 years and he indicated that it has led to injustices for this country and for its inhabitants. The academic concluded that the situation may lead to important changes over the next five years.