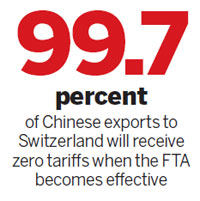 "The bilateral FTA is China’s first free trade pact on the European continent and has great significance," Yu said.

"It leads to win-win results and China’s gains are remarkable."

Although Switzerland is a small country outside of the European Union, it has close economic and trade links with the EU.

"The bilateral FTA will help focus China’s goods exports, investments and trade in services in Europe. The new trade rules forged in the FTA will also pave the way for China to advance other FTA talks," added Yu.

Commerce Minister Gao Hucheng said the bilateral FTA - one of China’s highest level and most comprehensive free trade pacts - will deepen China-Switzerland economic and trade ties, and various industries of the two countries complement each other, according to a statement issued on Sunday.

Yu said that the two governments are now completing the necessary ratification processes and were hopeful of formally signing the agreement in July.

Negotiations for the FTA started in January 2011, and the ninth round of talks was concluded on May 11.

The visiting Premier Li Keqiang signed a memorandum of understanding on concluding negotiations on a bilateral FTA with Swiss President Ueli Maurer in the Swiss capital Berne on Friday.

A month ago, Beijing inked an FTA with Iceland, which also falls outside the 27-nation EU bloc.

Up to 99.7 percent of Chinese exports to Switzerland will receive zero tariffs after the FTA becomes effective, Yu said.

In services, Switzerland has agreed for the first time to set a time limit for reviewing visa, work and residence permit applications.

The country has also consented to talks on cooperation in traditional Chinese medicine as well as further concessions in tourism and translation services, Yu said.

Switzerland said it will help improve after-sale services on watches in China and set up schools for watch training, which will strengthen the productivity and competitiveness of China’s watch-making industry, Yu said.

Meanwhile, China will allow 84 percent of Swiss exports to China to be duty-free, and 67 percent will be implemented after the FTA ratification, according to Yu.

"As for watches from Switzerland, the tariff will be reduced by 60 percent in the next 10 years and the reduction, starting from the agreement ratification, will be 18 percent in the first year and 5 percent annually in the following years," Yu said.

"But imported watches from Switzerland are still subject to import linkage tax, value added tax and consumption tax, which are not covered by the FTA. The price for Swiss watches in China will be lowered, but it is hard to say by how much."

The two nations also inked agreements on country-of-origin criterion to avoid any companies from each country not qualifying from the FTA, from taking advantage of it, according to Yu.

Both sides reached consensus on trade rules including those on intellectual property, competition, environmental issues, employment and government procurement.

Jacques De Watteville, the Swiss ambassador to China, told China Daily in a written interview: "The FTA agreement will bring significant improvements for both partners.

"The implementation of such an agreement will further boost our bilateral trade and investments. It constitutes a win-win situation for both countries, which have complementary economies.

"Asian countries which have concluded FTA with Switzerland have seen a substantial increase in export growth."

China has now established FTAs with 10 economies and is in advancing talks with six others, according to the Ministry of Commerce.

"An FTA with Norway is close to conclusion, and both sides are weighing the differences between Norway’s request on some industries, and China’s acceptance of those," Yu said.