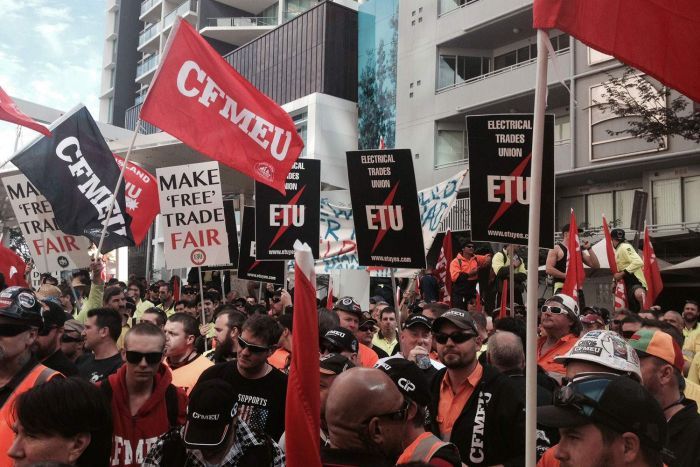 More than 2,000 unionists rally in Brisbane to protest against China-Australia FTA

The rally was held outside the Commonwealth Law Courts Building in Brisbane during a public hearing into the trade deal by the Joint Standing Committee on Treaties.

The protest marked the second national rally against the FTA, following protests at the ALP National Conference last Friday.

Guest speaker and Labor Senator Sue Lines said the protests were not an anti-trade statement.

"All of us want to see Australia trade and prosper, but that trade has to be fair and it must protect Australian jobs," she said.

"Labor is committed to do whatever it can to get to the truth of this and to stop what we can that disadvantages our trade, our works and our unions through the Parliament."

Senator Glenn Lazarus spoke at the event and questioned the secrecy of the FTA.

"The government has a long history of putting other countries ahead of this country," Senator Lazarus said.

"It’s about time that the Abbott Government thought about the people of Australia and the jobs of this country before overseas companies."

The Electrical Trade Union (ETU) argued the agreement would remove the mandatory skills assessment to obtain a temporary skilled work visa in Australia.