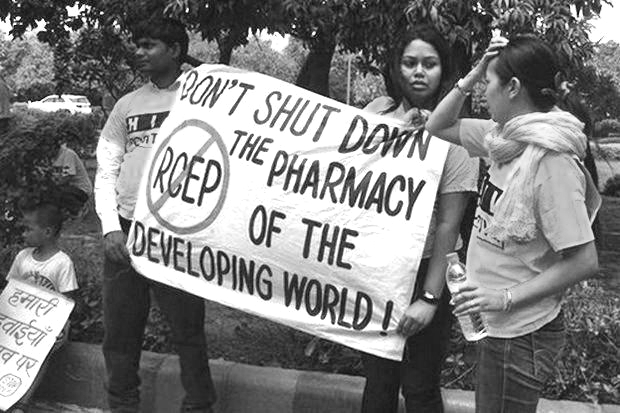 Opposition to the RCEP mega-regional free-trade pact has begun to coalesce against the intellectual property rights sections. (Photo via Doctors Without Borders)

With ratification and implementation of the highly controversial Trans-Pacific Partnership (TPP) trade agreement increasingly in doubt, countries in the Asia-Pacific region are focusing on the RCEP trade agreement, which contains similarly damaging provisions for access to medicines as the TPP.

“With the TPP trade agreement on life support – and the plug expected to be pulled any time now – RCEP could be the new benchmark for the ‘worst-ever trade agreement for access to medicines’”, said Loon Gangte, Coordinator, International Treatment Preparedness Coalition South Asia. “The potential inclusion of heightened intellectual property provisions in RCEP could endanger millions of people around the world who rely on generic competition in India to deliver affordable, life-saving medicines.”

Treatment providers such as MSF, patient groups, and civil society following the developments of the RCEP negotiations are concerned in particular that countries such as Japan and South Korea, will now increase pressure to ensure many provisions that expand monopolies on medicines are included in the RCEP agreement.

These proposed provisions go far beyond the World Trade Organization’s international requirements for intellectual property and serve to extend pharmaceutical corporations’ patent terms and introduce additional market monopolies based on clinical data (data exclusivity). These harmful clauses could severely affect access to affordable medicines by restricting generic competition in the region and globally. Ever-increasing pressure on India to agree to harmful intellectual property provisions in this trade agreement is particularly concerning, as competition from Indian generic medicine manufacturers has been instrumental in bringing the price of life-saving first-line HIV medicines down by 99% since 2001.

“People living with HIV are facing increased mortality rates because of co-infection with tuberculosis or hepatitis C, and there’s a lack of access to new drugs to treat these diseases either because of patent monopolies resulting in high prices, or regulatory barriers”, said Dr. Maria Guevara, Regional Humanitarian Representative (ASEAN) for MSF. “The UN recently warned countries to scrutinise all trade deals for their impact on public health, and I strongly urge all RCEP countries to reject any provisions that could restrict access to medicines or impede the ability of governments to meet their public health obligations.”

The proposed agreement also includes stringent intellectual property enforcement measures. These measures, if adopted, could result in an increased risk of trade in legitimate medicines being blocked in the name of infringement, and third parties—such as treatment providers—being embroiled in court cases simply for buying or distributing generic medicines.

“The idea that generic medicines could be seized while en-route to developing countries under these enforcement measures isn’t a vague possibility – it’s already happened, multiple times”, said Leena Menghaney, Head-South Asia, MSF Access Campaign. “If life-saving medicines such as antiretrovirals to treat HIV don’t make it to people on time because they were seized, the interruption in treatment could potentially be life-threatening for their health. Negotiators of the RCEP agreement need to be aware of the possibly deadly consequences of what they’re signing up to.”

Note to editors: In September, the UN Secretary General’s High Level Panel on Access to Medicines released a final report on promoting innovation for and access to health technologies that called out the health risks from trade agreements. The report, which was endorsed by Secretary General Ban Ki Moon, recommends that governments conduct impact assessments for all trade agreements to ensure that “increased trade and economic benefits are not endangering or impeding the human rights and public health obligations of the nation.” Full report available here: https://static1.squarespace.com/static/562094dee4b0d00c1a3ef761/t/57d9c6ebf5e231b2f02cd3d4/1473890031320/UNSG+HLP+Report+FINAL+12+Sept+2016.pdf