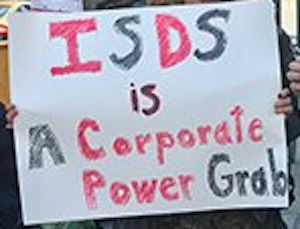 The ISDS provisions of the original North American Free Trade Agreement (NAFTA) – Chapter 11-B – are eliminated in NAFTA 2.0. Hundreds of millions of dollars in taxpayer funds have been awarded to corporations using NAFTA’s ISDS regime to attack domestic environmental and health policies.

ISDS between the United States and Canada is altogether terminated three years after NAFTA 2.0 goes into effect. Given high levels of U.S.-Canada cross investment, this change would prevent numerous future ISDS attacks. All but one of the past NAFTA ISDS payouts that related to environmental issues involved U.S. firms attacking Canadian toxics bans and timber, energy, mining and other policies. Terminating U.S.-Canada ISDS eliminates 92 percent of U.S. ISDS liability under NAFTA and most U.S. ISDS exposure overall.

With respect to Mexico, ISDS is replaced by a new approach that reflects some longstanding progressive demands. The new approach, enumerated in Annex 14-D, “Mexico-United States Investment Disputes,” eliminates the extreme investor rights relied on for almost all ISDS payouts: Minimum Standard of Treatment (MST) and the related Fair and Equitable Treatment (FET) standard, Indirect Expropriation, Performance Requirements, Transfers and pre-establishment “rights to invest.” It also includes remedies to several major procedural problems with the old ISDS regime by banning inherently speculative damages and forbidding lawyers in the system from “judging” cases while suing governments on behalf of corporations. The new process requires investors to first use domestic courts or administrative bodies and exhaust the domestic remedies available to resolve their dispute with a government – or try to do so for 30 months. Only then may a review be filed and only for Direct Expropriation or post-establishment discrimination (National Treatment or Most Favored Nation).

This new approach is a significant scale back of investor power relative to governments in contrast to the approach pursued by the European Union and Canada, which only addresses procedural issues while preserving expansive investor rights. What is otherwise real improvement on reining in the threats posed by ISDS has one significant loophole that must be closed. A very problematic secondary U.S.-Mexico Annex (14-E) provides special rights for nine U.S. firms that obtained 13 contracts during the recent partial privatization of Mexico’s oil and gas sector by the outgoing government if their contracts are cancelled without cause. Access to the full, expansive, substantive ISDS rights is carved in for these firms as long as Mexico provides such rights in agreements with other countries. None of the nine firms has used ISDS to attack Mexico in the past, but two have done so against Canada. While this annex is narrow in application, any access, much less for oil companies, to the broad ISDS rights is clearly problematic.