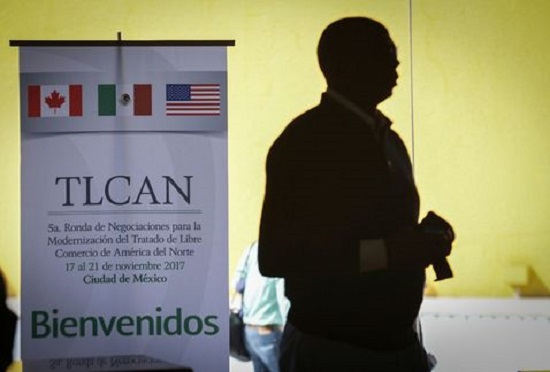 Trade negotiators from Canada, Mexico, and the United States finished work on three more chapters of an updated North American Free Trade Agreement (NAFTA) during their seventh round of talks in Mexico City. Their ministers warned, however, that many challenging decisions remain before they can conclude a full NAFTA deal.

The latest round of talks concluded on 5 March and did not feature a trilateral statement from ministers, unlike some of the prior rounds. The negotiations to modernise NAFTA began in August last year with the initial goal of finishing them in 2017, with officials later revising that timeframe.

During the closing press conference in the Mexican capital on Monday, ministers welcomed the completion of those three chapters, which involved good regulatory practices, publication and administration, and sanitary and phytosanitary (SPS) measures, as well as annexes on chemicals and proprietary food formulas.

Together with the previously closed chapters on competition, small and medium-sized enterprises (SMEs), and anti-corruption, NAFTA negotiators now have six completed chapters.

“These chapters are important and provide further evidence that all three countries want to upgrade and modernise NAFTA,” said US Trade Representative Robert Lighthizer. He qualified that statement, however, by indicating that the final deal will be much more comprehensive.

“To complete NAFTA 2.0, we will need agreement on roughly 30 chapters. So far, after seven months we have completed just six. Now granted, these things tend to converge more towards the end of a negotiation,” the US trade official continued.

While the eighth NAFTA round will return to the Washington metropolitan area, officials have not announced set dates, nor have they publicly confirmed a schedule for the longer term.

Lighthizer also warned on Monday that the three parties are racing against the clock, given Mexican general elections in early July, Canadian provincial elections in Ontario and Québec, and US congressional midterms in early November.

“All of this complicates our work. I fear that the longer we proceed, the more political headwinds we will feel,” he told reporters. Lighthizer also indicated that he would want a concluded NAFTA ready for consideration by the current Congress.

In other words, his office would need to go through the various domestic processes outlined under US Trade Promotion Authority, such as notifying Congress three months ahead of signature and publishing the text, before a completed deal can be taken up by legislators. This Congress is in place through early January 2019, leaving a limited timeframe for all these steps to occur.

The US trade chief continued that while reaching an updated deal among all three NAFTA countries would be the ideal, he would be ready to negotiate bilateral accords with Washington’s NAFTA partners, if need be.

At the time, he did not specify details on how this might work, and whether there would be bilateral talks with both Canada and Mexico, or just one of the two. The other NAFTA ministers did not take up this possibility in their remarks to reporters, though Mexico’s top trade official has since ruled out that option publicly.

Ildefonso Guajardo Villareal, Mexico’s Economy Secretary, acknowledged on Monday that the road ahead will be challenging, while noting that negotiators are also close to finalising chapters on e-commerce, telecommunications, technical barriers to trade, energy, and a pharmaceuticals annex.

“I do agree with Ambassador Lighthizer that six chapters out of 30 are not many for six months’ work. However, the seventh round in Mexico has contributed exactly the same number of chapters that we had accumulated in six previous rounds,” said Guajardo at the closing press conference.

“In this round we’ve increased our efficiency by 100 percent and this makes sense with what Ambassador Lighthizer just said to us. As we get closer to the end, undoubtedly the timing will allow us to start complying with our objectives and to start resolving our differences,” the Mexican official added.

Guajardo also acknowledged the challenging political timing, while cautioning against compromising on substance.

“There is no doubt that the timing is very important. There will be political calendars in all three countries, but what we have to be very much aware of is that the final result will be sufficiently strong for us to all be able to give our countries a treaty that is in the national interest of all three of us,” he said.

Meanwhile, Canadian Foreign Minister Chrystia Freeland again highlighted the value of updating NAFTA, while stressing that the final version must benefit all three countries, especially given the important role that the agreement already plays in governing trade across North America.

“This can and should be a shared project. That’s because trade is not a zero-sum game,” said Freeland, arguing that making the NAFTA trading coalition more competitive overall “is essential to our economic prosperity and to our ability to compete globally.”

“We are beginning to make headway on some of the more challenging issues,” she added, noting that talks had continued on the “creative ideas” that Canada had presented during the previous round in Montreal in response to US proposals on automobile rules of origin, dispute settlement, and a sunset or review clause, among others. (See Bridges Weekly, 1 February 2018)

Technical level talks on those subjects are reportedly expected to continue between now and the next formal round, according to statements from various negotiators in recent days.

Freeland also highlighted the “solid progress” seen on other subjects in this round, noting that NAFTA negotiators “have been toiling away at some of these bread-and-butter chapters for months without a lot of fanfare.”

“That discussion has been constructive and it continued here in Mexico City. We are making progress, but we do have significant work ahead,” she added.

The prospect that Canada and Mexico could soon face US tariffs on imported steel and aluminium also loomed over the final days of the talks, following an informal announcement from US President Donald Trump that these would be forthcoming. The tariffs, while not finalised, would presumably apply globally.

“As a key NORAD and NATO ally, and as the number one customer of American steel, Canada would view any trade restrictions on Canadian steel and aluminium as absolutely unacceptable,” said Freeland at the closing press conference.

The term NORAD refers to the North American Aerospace Command, in charge of governing aerospace issues such as air sovereignty, air defence, and related subjects between the US and Canada. NATO is the North Atlantic Treaty Organization, an intergovernmental coalition involving the US, Canada, and various European countries.

Guajardo said on social media site Twitter that “México shouldn’t be included in steel [and] aluminium tariffs. It’s the wrong way to incentivise the creation of a new [and] modern NAFTA.”

Canada and Mexico are among the top four sources of steel exports bound for the United States, along with Brazil and South Korea. China, while the world’s largest producer overall, ranks as the tenth largest source for the US.

White House officials have since suggested that Canada and Mexico could face temporary tariff exemptions, though details were not confirmed at press time. An announcement from the US president is set for later on Thursday.