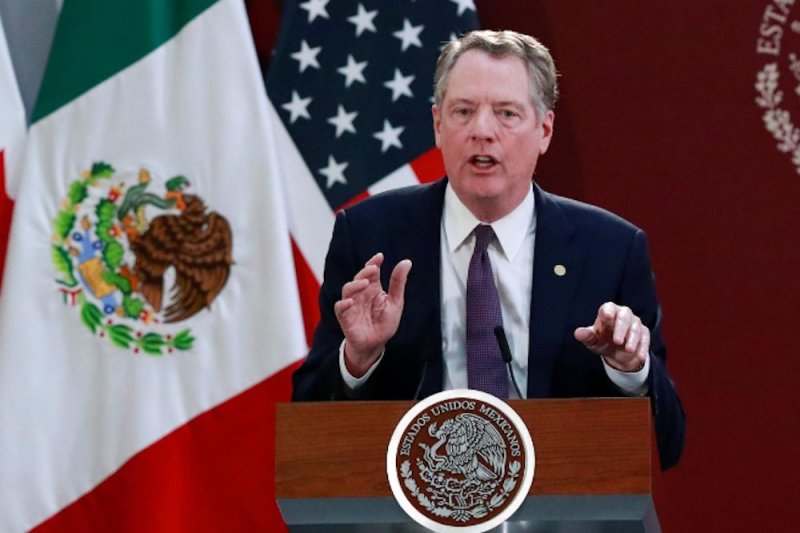 ’NAFTA lite’: Trump and Democrats’ trade deal is similar to pact president mocked as ’worst ever’

WASHINGTON – President Donald Trump relentlessly ridiculed the North American Free Trade Agreement with Mexico and Canada as the “worst trade deal ever” when he was running for office and promised to rip it up if he was elected.

But instead of tearing the agreement to shreds, Trump mostly patched it up.

The new U.S.-Mexico-Canada Agreement, known as the USMCA, that is supposed to replace NAFTA – and which appears headed for congressional approval following a deal this week between Trump and House Democrats – is in many ways similar to its quarter-century-old predecessor.

More than half of the new trade agreement simply modernizes provisions already contained in NAFTA.

“The president didn’t rip up NAFTA, nor is this just a rebranding of NAFTA with the Trump and House Democrats’ names on it,” said Daniel Ujczo, an international trade attorney in Ohio.

Instead of demolishing NAFTA and starting over, “it’s a renovation of North American trade,” Ujczo said. “We put a fresh coat of paint on about 60 percent of the deal, so we kept what worked in the original NAFTA. But we have upgraded some applications and fixtures in terms of the technology chapters and customs chapters. And then we knocked down some walls.”

Democrats, labor groups and other critics mocked the new trade proposal as “NAFTA lite” when Trump announced the agreement last year after more than a year of talks with Mexico and Canada.

House Democrats insisted on revisions before they would allow the deal to be put to a vote. After months of negotiations with the Trump administration, House Speaker Nancy Pelosi announced a series of changes to the deal on Tuesday, including stronger provisions Democrats had wanted on labor, enforcement and pharmaceuticals.

What’s in the new trade deal?: From NAFTA to USMCA: Key changes on trilateral trade pact

The revised deal “is infinitely better than what was proposed by the administration,” Pelosi, D-Calif., told reporters during a news conference in the Capitol.

“This is no longer NAFTA lite,” said Rep. Jimmy Gomez, D-Calif., who was involved in the talks. “This is a new trade agreement.”

“Fixing the existing, damaging NAFTA is not the same as negotiating a truly progressive trade agreement from scratch,” she said.

Regardless, the deal between House Democrats and the Trump administration clears the way for the House and the Senate to vote on the trade agreement, handing the president a victory on a legislative priority even as he faces the likelihood of impeachment as early as next week.

Pelosi and other Democrats did not say when they expect a vote on the trade pact but suggested it could happen before the end of the year. Senate Majority Leader Mitch McConnell, R-Ky., said he does not expect the Senate to take up the trade deal until after it wraps up Trump’s likely impeachment trial early next year.

McConnell and the USMCA: Democrats rip McConnell on delaying USMCA vote until after impeachment trial

While the new trade pact with Mexico and Canada does not represent a wholesale rewrite of NAFTA, it does contain several new provisions, including a chapter dealing with e-commerce, which was in its infancy when NAFTA took effect in 1994.

The new trade pact, which updates rules for the movement of products between the three countries, also puts in place tougher labor standards regarding auto production.

Under NAFTA, automakers can avoid tariffs on their cars if 62.5 percent of their vehicles’ components are manufactured in the U.S., Canada or Mexico. That threshold jumps to 75 percent under the new deal. Also, starting in 2020, 30 percent of vehicle production would have to be done by workers earning an average production wage of at least $16 per hour. By 2023, that percentage would rise to 40 percent.

Labor groups and other critics had complained those provisions didn’t go far enough and that the new agreement did not include a sufficient means to enforce such requirements.

But House Democrats said Tuesday a series of revisions they negotiated with the Trump administration would provide for adequate monitoring, accountability and enforcement. One provision, for example, calls for the establishment of attachés in Mexico City to regularly monitor whether Mexico is adhering to environmental laws, regulations and practices.

Democrats hailed the changes as a victory for American workers. But Dan Ikenson, a trade expert at the Cato Institute, a libertarian think tank, argued the revisions made the new trade agreement worse because it will now be easier for special interests to halt trade by simply accusing Mexican factories of violating labor or environmental provisions.

In addition, the tougher auto standards will have the effect of forcing car manufacturers to keep production facilities in the United States instead of moving them to Mexico, he said.

“There’s a lot of upstream protectionism that has been baked into this agreement,” Ikenson said.

White House press secretary Stephanie Grisham said the new pact “rebalances trade in North America,” which will lead to more American jobs, and that the revisions make the deal “better and stronger for the American people.”