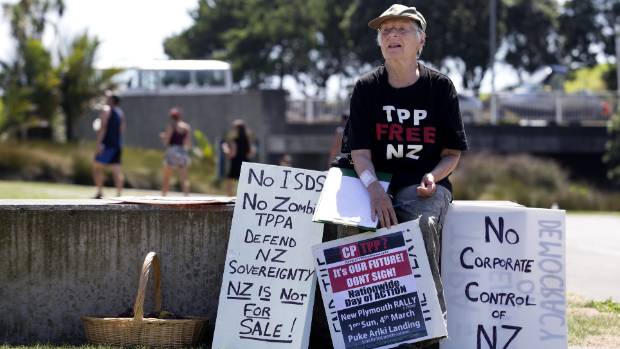 Nationwide action against the TPPA

“Beginning this weekend, It’s Our Future is hosting events throughout the country in opposition to the signing of the TPPA,” says Oliver Hailes, spokesperson for New Zealand’s network of opponents to the controversial economic treaty.

“Starting on Saturday in Nelson, concerned Kiwis will gather to let the Government know that they do not consent to the signing ceremony in Chile this Thursday,” he said. “When the Government shuts the people out of the process, we must build our own platforms.”

Further events are being held on Sunday in Auckland, Whangarei, Dunedin and New Plymouth, and on the day of signing (Thursday 8 March) in Christchurch and outside Parliament in Wellington.

Mr Hailes points out that the revised text is exactly the same as the one that Labour and NZ First MPs marched against in 2016, except for 22 suspensions that are bound to be revived.

“They’ve failed to follow through on their promise to undertake an independent cost-benefit analysis. This week a poll commissioned by ActionStation confirmed that 75% of New Zealanders still want that independent analysis before signing up.”

During parliamentary debate on Wednesday, Golriz Ghahraman MP for the Green Party was the only voice who challenged the Government’s sudden change in policy: “We need to make trade fair and fit to serve our needs in the 21st century, instead of ceding sovereignty to foreign investors.”

“We tautoko those words,” says Mr Hailes. “In fact, we’re collecting signatures for a petition calling for democratic reform of the process for negotiating and signing economic treaties.” This petition can be signed at dontdoit.nz and it will be presented to Parliament.

It’s Our Future also extends its support to allies in Christchurch who chained themselves to railway lines, highlighting how the TPPA sends New Zealand down the wrong track.