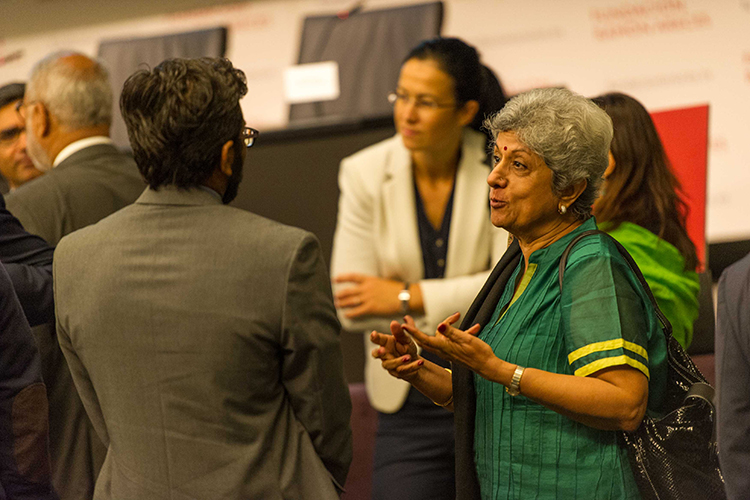 EUBulletin: You are both an academic based in India and a former diplomat who has served in many parts of the world, including in Europe. So you can look at various issues from both an academic and practitioner’s perspective. What has, in your view, been the greatest achievement in recent EU-India relations?

Neelam Deo: I think EU-India relations actually have not had any achievements. We have been talking about India-EU free trade agreement for 12 years and there has not been much movement. I am sure the EU has its own understanding but what I know from the Indian side is the EU’s insistence on opening up on wine imports, namely from France, and automobile imports, which I suppose is the German’s interest, have held up the negotiations. On the Indian side, of course, we are trying to develop our own automobile industry and in fact our big hub for auto components. And there is a nascent wine industry and the demand is growing, so that is what the French would want to tap into.

EUBulletin: You seem to be very pessimistic, indeed…

Neelam Deo: Well, it seems to me that why the talks have been going on for so long has also been aggravated over the last 4-5 years by this problem that we have with Italy over the two marines who were sued in India because they have shot and killed two Indian fishermen. So the Italians have or more less had support of the European Union and there is no progress in India-EU affairs. Now, while we could certainly do better in our legal process in handling these two Italian marines, but you know while in India, they have lived in the Italian Culture Centre, not a bad place to live in, and they have been allowed to visit Italy many times because one of them had medical issues, and thus more less lives in Italy.

So I think the attitude has been unnecessarily harsh and maybe it has something to do with the fact that now the EU Commissioner for Foreign Affairs is also of Italian origin and former Italian foreign minister (note: Mrs. Mogherini). So, the bilateral issues between India and Italy have been allowed to hijack the India-EU agenda. It is not very optimistic.

EUBulletin: One of the issues that have hampered the EU-India FTA negotiations was the issue of generic drugs produced in India and the patents held by Western multinationals. There have been many legal disputes and also rallies in the streets of Indian cities slamming the perceived unfair practices of Western companies that try to hold on to these patents. Is there a way to find a compromise solution to overcome this obstacle?

Neelam Deo: You know I mean considering the cost of healthcare, while American and European pharmaceutical multinationals are constantly trying to perpetuate their patents, it is objectionable. In India, we have actually had only one case in which the Supreme Court intervened to enable the medication to ignore the claims for a patent or extending the patent and for the production to continue in India. Besides being it actually both wrong morally and otherwise, India supplies something like 60 percent of generic drugs globally. The HIV epidemic in Africa was bad enough but it would have been rampant otherwise.

All the non-governmental organizations, which the European and the American governments otherwise use to pressurize the developing countries and India, whether Amnesty International or Human Rights Watch etc., they all support the Indian position on patents and particularly on generic drugs. Because you know the governments are only concerned about profits of the multinationals and India is a TRIPS-compliance country, so to insist that India has to do more than TRIPS requires of us and allow these companies to make billions of dollars in profits, when the patents have in fact expired already, is just simply unfair and is not acceptable and it should not be acceptable to anybody, including the European Union. (Note: TRIPS, or the Agreement on Trade-Related Aspects of Intellectual Property Rights, is an international legal agreement between all the member nations of the World Trade Organization.)

EUBulletin: So, can you see any solution at the end of this long ‘tunnel’?

Neelam Deo: You know considering the price of medication, the fact of increasing inequality, also in Europe, when poor people can’t afford to buy medical care anywhere, then we really need to defend our interest. So, one of the American companies has come to an arrangement when they allow that even on a drug where the patent has not expired yet, that it can be produced and sold as a generic by Indian companies to people who can’t afford to buy the other one. Surely, it cannot be the European wish to let poor people just die!

EUBulletin: Now moving from economics to geopolitics, while the trade volumes between Europe and China has been considerably higher than its trade volumes with India, at the same time, there has also been a growing concern in Europe – but also in India – about the rise of China, which has been characterized by growing assertiveness. But the question is why the EU is so-to-say ‘obsessed’ with non-democratic China and not with the world’s largest democracy, India?

Neelam Deo: The EU is trying to persuade India to be a democracy-promoter but the EU is not willing to sacrifice any of its own economic interests. And I think that the EU has to recognize that the India is a developing country, it is a poor country, and if you want to grow a relationship with the European Union, then you have to look at it with your eyes open and not just looking at the size of the trade. Yah, the size of the trade that the EU has with the United States is even larger than it has with China. So, I think you know that we cannot continue to pretend to accuse China of not being a democracy, of being mercantilist, but then you cannot make progress with India because you want to force India to import some of your products. I think that the EU has to recognize you know that geopolitics and geo-economics are not two separate universes – they converge, they overlap, they impact each other – and so I think that these things will have to come together.

EUBulletin: But with China in mind, when it comes to the Indian Ocean, would not this be the region where the security interests of the EU and India could converge in the long run?

Neelam Deo: India and EU interests have converged there and we have actually cooperated in the Indian Ocean on the piracy issues. But if the EU’s assessment is that it has a convergence of security interests, so it better gets on with it. China is increasing its presence in the Indian Ocean region, exactly that is of the concern to India. Through Pakistan, for example, with the port there and also just ships coming around as it is building what it calls the Maritime Silk Road, acquiring ports not just in Pakistan, trying to get access in Sri Lanka, in Bangladesh, everywhere, Maldives, Mauritius – and the European Union, if it thinks it is a shared security concern with India, it should wake up and get on with it.