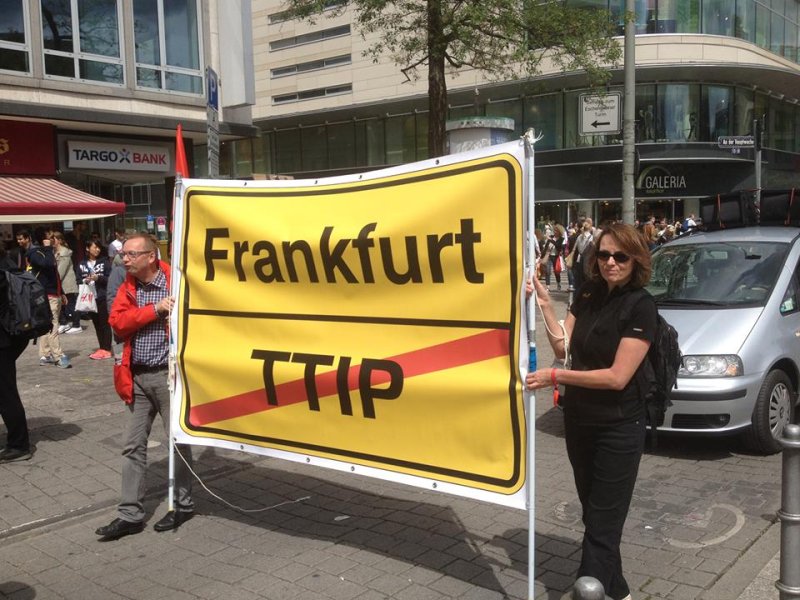 Martina Roemmelt-Fella, who owns a small, family-run turbine manufacturer in Bavaria, should be a cheerleader for a trade deal between Europe and the United States that promises to ease the flow of goods and services across the Atlantic.

But instead she fears the Trans Atlantic Trade and Investment Partnership (TTIP) being hammered out between Brussels and Washington will give too much power to big multinationals at the expense of small companies like hers.

"The proposals are being negotiated behind closed doors with the help of 50 or 60 big corporates," said Roemmelt-Fella, whose firm is one of the thousands of small and medium-sized companies known as the ’Mittelstand’ that account for 89 percent of Germany’s exporters and form the backbone of the economy.

"TTIP may bring significant benefits for big multinationals, but I don’t think there are big advantages for the Mittelstand," she added.

Her opposition underscores the depth of scepticism towards TTIP in Germany, Europe’s largest economy, where media coverage has focused largely on protests from anti-globalisation groups and labour unions. It also highlights the challenge facing German Chancellor Angela Merkel as she tries to overturn entrenched suspicion of the pact.

While Merkel and big businesses, such as industrial group Siemens and car parts supplier Robert Bosch, remain strongly in favour of a deal, public support has fallen sharply over the past year, according to a recent opinion poll. Such widespread German mistrust could mean a deal has to be diluted or is even blocked.

Hurdles are also growing in Brussels, where as negotiators prepare for their 10th meeting next month, the European Parliament is so split on the subject that it cannot even agree to debate it.

Earlier this month, Economy Minister Sigmar Gabriel declared that the talks might fail.

"I am far from certain that there will be an agreement in the end," Gabriel told a meeting of German booksellers. They fret that TTIP will sound the death knell for a German law that fixes the price of books, despite repeated government reassurances.

Gabriel came out in favour of TTIP last year, but faces opposition from others in his party, the centre Social Democrats (SPD). Several local SPD associations have called for an immediate suspension of the trade negotiations.

Proponents say an accord will create a market of 800 million people, boost economic output and serve as a counterweight to China’s increasing economic clout.

The German unease is remarkable because it is one of the few developed nations to have increased its share of trade in the past 15 years.

"I’ve been in this business for 30 years and the Germans have never been a problem," Pascal Lamy, former director of the World Trade Organisation, told Reuters.

"The Germans were pushing the French in the right direction. Now, I have to go and tell the French to go and help the Germans," he said.

Roemmelt-Fella, whose company specializes in making turbines for hydropower plants, is not the only exporter with misgivings.

A Commerzbank study last year found only 15 percent of Mittlestand companies believe TTIP would be a good thing for their business.

A separate survey by the BVMW Mittelstand association, showed more than 80 percent of its members believe the government is not doing enough to represent their interests in the negotiations.

Much of their concern focuses on how companies settle disputes under the pact. They worry U.S. multinationals will use an Investor-State Dispute Settlement (ISDS) clause to bypass national courts and bully governments into doing their bidding.

The Organisation for Economic Cooperation and Development (OECD) estimates the average legal and arbitration costs of ISDS cases to be around $8 million (7.1 million euros), an amount that is far beyond the means of the average Mittelstand firm.

A further gripe is the proposed creation of a regulation council, designed to smooth the consultation process on new laws, but which opponents say will make the legislative process more susceptible to manipulation.

Mittelstand companies are not against free trade and many welcome TTIP’s aim to eliminate tariffs and create common technical standards, which would lower the cost of entering the U.S. market.

In particular, suppliers to Germany’s big car companies BMW, Daimler and Volkswagen (VOWG_p.DE), stand to benefit from harmonized regulatory standards that would remove the need to duplicate development, certification and crash testing.

But this cuts both ways with U.S. firms who want to sell to Europe also benefiting from lower barriers to entry. This unsettles some Mittelstand companies who fear it won’t be a truly level playing field.

Heinrich Luedeke, CEO of PacTech, a maker of advanced packaging equipment based in Nauen, east Germany, believes European firms will be disadvantaged compared to their U.S. peers who have more natural resources and lower energy costs.

"Just because there are no more tariffs doesn’t mean we will eat more chickens, or build more machines; the total amount will stay the same," he said.