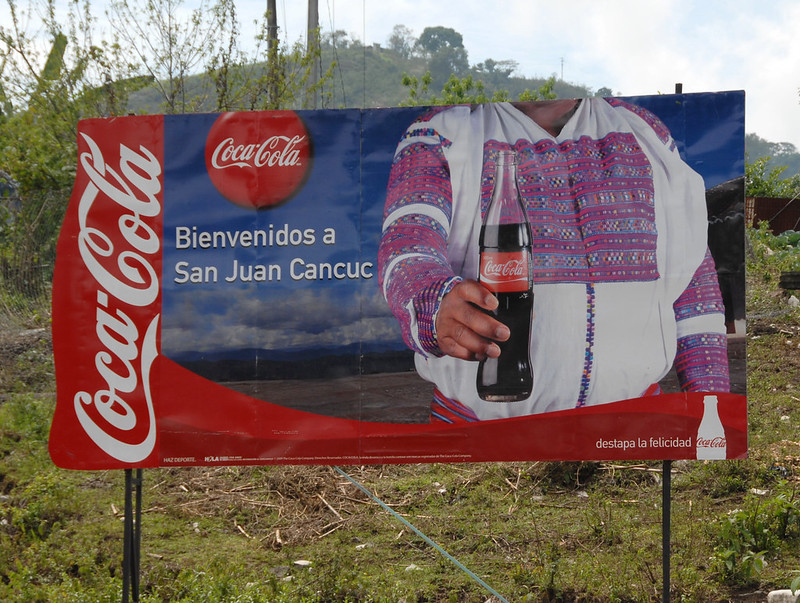 In August, the southern Mexican state of Oaxaca banned the sale of junk food and sugary drinks to children under the age of 18.

Mexico’s Assistant Health Secretary Hugo Lopez-Gatell, who has denounced soda as "bottled poison", expressed support for the new law, which has begun to catch on in other Mexican states as well.

Lopez-Gatell is also the government’s coronavirus tsar, and early on highlighted the role of the country’s "epidemic" of diabetes and obesity in exacerbating the coronavirus pandemic. Mexico has reportedly recorded more than 70,000 COVID-19 related deaths to date - although the actual toll is likely much higher.

In recent years, Mexico has vied with the US for the title of most obese nation on earth - three-fourths of adults there are overweight, and at least one in 10 have diabetes.

Oaxaca, one of the poorest Mexican states, has among the highest obesity levels and the highest child obesity rate in the country.

I have been in Oaxaca since March, and can confirm that - as is the case in much of Mexico - it sometimes seems impossible to take a step without tripping over Coca-Cola advertisements or similar propaganda.

Indeed, Mexicans drink more soda per capita than any other country in the world, and former Mexican President Vicente Fox was once the CEO of Coca-Cola Mexico. In 2017, diabetes became the nation’s number one killer.

How, then, did Mexico end up in such a deadly position?

To answer this question, a good place to start is the North American Free Trade Agreement (NAFTA) between the US, Canada, and Mexico, which came into effect in 1994 - and was recently repackaged as something-way-better-than-NAFTA under the auspices of resident continental megalomaniac Donald Trump.

Behind the ever-convenient facade of "free trade" - which in contexts involving the US generally means the US is free to do as it pleases while the rest of the participating countries are free to suck it up - NAFTA enabled the US to flood the Mexican market with sugary drinks, processed foods, and other staples of noxious, corporate-driven existence.

American fast food chains and convenience stores rapidly proliferated, and, as the New York Times noted in a report headlined A Nasty, NAFTA-Related Surprise: Mexico’s Soaring Obesity, Walmart was the country’s largest food retailer as of 2017. This in a country whose traditional cuisine appears on UNESCO’s Representative List of the Intangible Cultural Heritage of Humanity.

"Food", of course, is another term that should be used loosely when referring to products largely devoid of nutritional value that are, in fact, addictive and hazardous to human health.

To be sure, one of NAFTA’s crowning achievements was the exposure of sectors of the Mexican economy to conquest by US capital, as with the dismantling of restrictions on foreign majority ownership in Mexican businesses.

A 2016 paper in the Washington University Journal of Law & Policy argues that NAFTA-facilitated foreign direct investment by the US in Mexico has been the "most direct contributor to the spread of non-communicable diseases" like obesity in that country.

Direct US investment in Mexican food and beverage firms soared by the billions on account of the 1994 deal, exerting additional toxic influence on Mexican consumer choices - which do not really qualify as "choices" when, for example, Coca-Cola is just as cheap and often more readily available than water.

The paper, which also discusses global trends of "McDonaldisation" and "Coca-Colonisation," cites the calculation that post-NAFTA US exports to Mexico of high-fructose corn syrup - a high-calorie sweetener used in sodas and other products and linked to obesity - were thus far "up by a factor of 863".

NAFTA furthermore provided imperial entities with a legal apparatus to adjudicate on behalf of hypocrisy, as when US agribusiness company Cargill Inc successfully sued the Mexican government after Mexico attempted to tax the production and sale of high-fructose corn syrup-enriched soft drinks.

The US, for its part, was permitted to blissfully subsidise overproduction in its own corn industry - not to mention its meat industry, soy industry, and so on - leading, less than shockingly, to an export-based devastation of domestic Mexican production.

So much for "free trade".

In the end, anyway, the function of US-led neoliberal globalisation is to destroy not only cuisines and cultures but also lives and livelihoods. By unleashing its industrialised agricultural system against Mexico, the US drove to ruin and displacement millions of Mexican farmers, who were unable to compete in the hostile environment.

Many had to migrate to cities, where they increasingly subsisted on processed food rather than pursuing a traditional local diet, both due to economic constraints and the fact that - surprise surprise - much of the good stuff was being exported to the US, which in the wake of NAFTA found itself on the receiving end of a year-long influx of fresh fruits and vegetables grown in the warmer climes of the southern neighbour.

Loads of Mexicans have also been compelled to travel north to the US itself in search of financial salvation - often as "illegal" labourers, since avocados happen to have more rights than certain categories of humans in terms of crossing the US-Mexico border.

Naturally, Mexico is not the only place to have been put on a poisonous neoliberal diet. The New York Times writes: "Research shows free trade is among the key factors that have accelerated the spread of low-nutrient, highly processed foods from the West, ’driving the obesity epidemic in China, India, and other developing countries worldwide,’ according to the TH Chan School of Public Health at Harvard."

And there are plenty of related capitalist machinations adversely affecting global nutrition. The documentary Couscous: Seeds of Dignity, by Tunisian geographer and academic Habib Ayeb, for instance, shows how lucrative export crops are cultivated in Tunisia to the detriment of the masses and the enrichment of the few.

In the film, Tunisian farmers describe how local seed varieties were superseded by inferior imported varieties, contributing to a landscape of agricultural neocolonialism and an assault on food sovereignty. One of the documentary’s protagonists - named, as irony would have it, Eisenhower - rails against the chemical products "that we import [that] have killed the soil", and the West’s efforts to "kill our agriculture".

In 2018, meanwhile, then-Director General of the United Nations’ Food and Agriculture Organisation (FAO) Jose Graziano da Silva spoke of the globalised food system’s key role in the "global pandemic of obesity", which he said should be combatted via various initiatives including restrictions on junk food advertisements aimed at children.

Which brings us back to that other pandemic called coronavirus - and to Oaxaca’s new junk food ban.

And what do you know: One of the reasons the US junk food industry has so aggressively targeted Mexico is because - while US companies certainly are not going hungry on the domestic scene - US restrictions on food advertisements for children means that "corporations look around the world to see where the legal framework still allows them to market to children, and they double down".

This last quote is from Alyshia Galvez, author of Eating NAFTA: Trade, Food Policies, and the Destruction of Mexico, who also emphasises that, in Mexico, historically, "you simply do not see diabetes" among people who consume the traditional milpa-based diet. Rather, diabetes is a "product of an industrialised diet".

To be sure, the incidence of diabetes in Mexico shot up after the passage of NAFTA, and - as with coronavirus - the disease disproportionately afflicts the poor.

But while Oaxaca’s intentions are undoubtedly noble, it is difficult to imagine how outlawing the provision of junk food to people under the age of 18 by anyone except parents will ameliorate a situation in which many parents are already known to feed their children soda and other unhealthy items on a regular basis - because those items are the affordable ones, and they are shoved down Mexico’s throat by imperial marketing schemes.

Enrique Cifuentes, a medical doctor in the Oaxacan village of Zipolite, emphasised to me the importance of recognising people are products of their food environments, and the obesity problem in Mexico can not be reduced to one of a lack of alimentary discipline.

Having just lost nearly 20 kilogrammes himself - an excess weight he attributed to regular patronisation of US fast food establishments - Cifuentes went on to underscore that small shops in Oaxaca would suffer to a far greater extent than the large (often US-backed) chains as a result of the ban, another bit of less-than-uplifting news in the context of a severe coronavirus-induced economic crisis.

For more bleak news, one need look no further than a recent Washington Post dispatch quoting Barry Popkin, an obesity researcher at the School of Public Health at the University of North Carolina at Chapel Hill, on the effects of coronavirus on the global obesity epidemic:

"Covid is accelerating it. We’re seeing new lines of junk food introduced, see companies giving out free junk food and calling it disaster relief … It’s very stressful, so you go for comfort foods and tasty things. And we expect the recession will take hold and we’re going to hit a food-insecure world where people are buying this food because it’s cheap."

Call it a vicious neoliberal cycle - one in which life itself is scarily cheap.