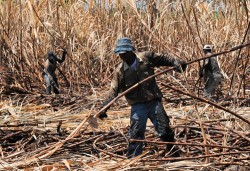 A worker cuts sugar cane in March 2009 in Candelaria, Colombia. A free-trade agreement between the U.S. and the South American country is stalled in Congress in part over concerns about labor and human-rights abuses. (LUIS ROBAYO/AFP/Getty Images)

In the aftermath of a global meltdown, one would think that governments would be more cautious about embracing free-trade policies. But European and Latin American leaders are doing just that in Spain this week as they discuss expanding economic ties by forging new trade agreements.

In fact, the summit in Madrid has already liberalized trade between Europe and Latin America. On Tuesday, the European Union and Central American countries agreed to a free-trade deal for the first time. The agreement lowers tariffs in both directions for industrial goods moving between EU countries and Costa Rica, El Salvador, Guatemala, Honduras, Nicaragua and Panama. (Peru and Colombia also agreed to a new deal with the EU’s 27-nation bloc.)

But labor unions, human rights advocates and workers across both continents are opposing the agreement at a time when Europe is struggling to rebound from the financial crisis, suddenly intensifed by the recent turmoil in Greece. The popular opposition to free trade could foreshadow similar conflicts in the United States, as several deals with Latin American countries are currently stalled in Congress.

Critics have assailed the meeting for excluding union concerns. The International Trade Union Confederation (ITUC) held its own summit earlier this month to adopt an agreement opposing the free-trade policies for their lack of transparency and profit-oriented model. The confederation criticized the agreement for not emphasizing social safety nets, international labor standards and sustainable development.

The ITUC said in a statement:

The Trade Union Summit voices its disagreement with the development of negotiations held between the EU and Peru, Colombia (and initially with the Andean Community) and Central America, since there has been very little publicly available information, whilst participation of civil society has been scarce and mere formality.

Replies to the many trade union proposals and joint statements have been absent, ambiguous or have rejected the proposal concerned. The EU’s promise to the ETUC to include mechanisms for trade union participation in order to comply with the aspects in the Agreements covering workers’ rights has not made it into print in the final texts.

Talks were also revived with South America’s Mercosur bloc, but unions are critical for any new deal over the possibility that it will displace agricultural workers on both continents. The discussions have reached an impasse several times over tariffs and subsidies to European farmers, as each side tries to engineer the playing field to their advantage.

A report by Spain’s COAG union found that EU farmers have a hard task of competing with cheaper labor in South America while managing strict health and environmental codes.The report estimitated European farmers would lose $3.7-6.2 billion.

But farmworkers in South America don’t get a better deal either under new agricultural product trade daels. Mercosur countries - Brazil, Argentina, Uruguay and Paraguay - are concentrating lands into large agribusinesses that have cornered the market. Despite a phenomenal rate of land expansion, land ownership is being consolidated away from small farmers.

The unfavorable outcomes for working people in Europe and South America will be closely watched here in the United States. South Korea, Peru and Colombia have free-trade deals currently stalled in Congress due to opposition on various fronts.

Last week, Secretary of State Clinton told reporters that President Obama is committed to the free-trade deals with Peru and Colombia. But non-governmental organizations, unions and U.S. lawmakers are especially concerned with Colombia’s egregious labor and human-rights abuses.

Amnesty International and the ITUC have chided the free trade agreements with Colombia for failing to include provisions to project workers. Since 2008, an increasing number of unionists have been killed. Twenty five unionists have already been murdered this year.

But like the EU agreements, the U.S. deals won’t improve the lives of Colombian workers. A September study by Oxfam International found that a U.S-Colombia free-trade agreement would favor American interests. The provisions would require Colombia to eliminate any protections, provide preferential trade access and exempt the U.S. from certain tariffs.

Meanwhile, the U.S. will be able maintain its agricultural subsidies. Most of all, about 1.4 million families who work on small farms would see their income decline, according to the Oxfam study:

The United States negotiated the FTA taking only commercial considerations into account. Generally, the treatment accorded Colombia was less favorable than that granted to other countries in previous trade agreements.

The EU and U.S. agreements are striking: both point to increased corporatization and are ultimately sheisty deals for workers. The bilateral deals are troubling for their lack of transparency, especially when the wide-reaching economic policies often affect those who’ve been hit hardest by the global crisis.

Even after the economic turmoil of the last two years fundamentally challenged the foundations of neoliberal dogma, it looks like world leaders will continue to serve up more of the same.