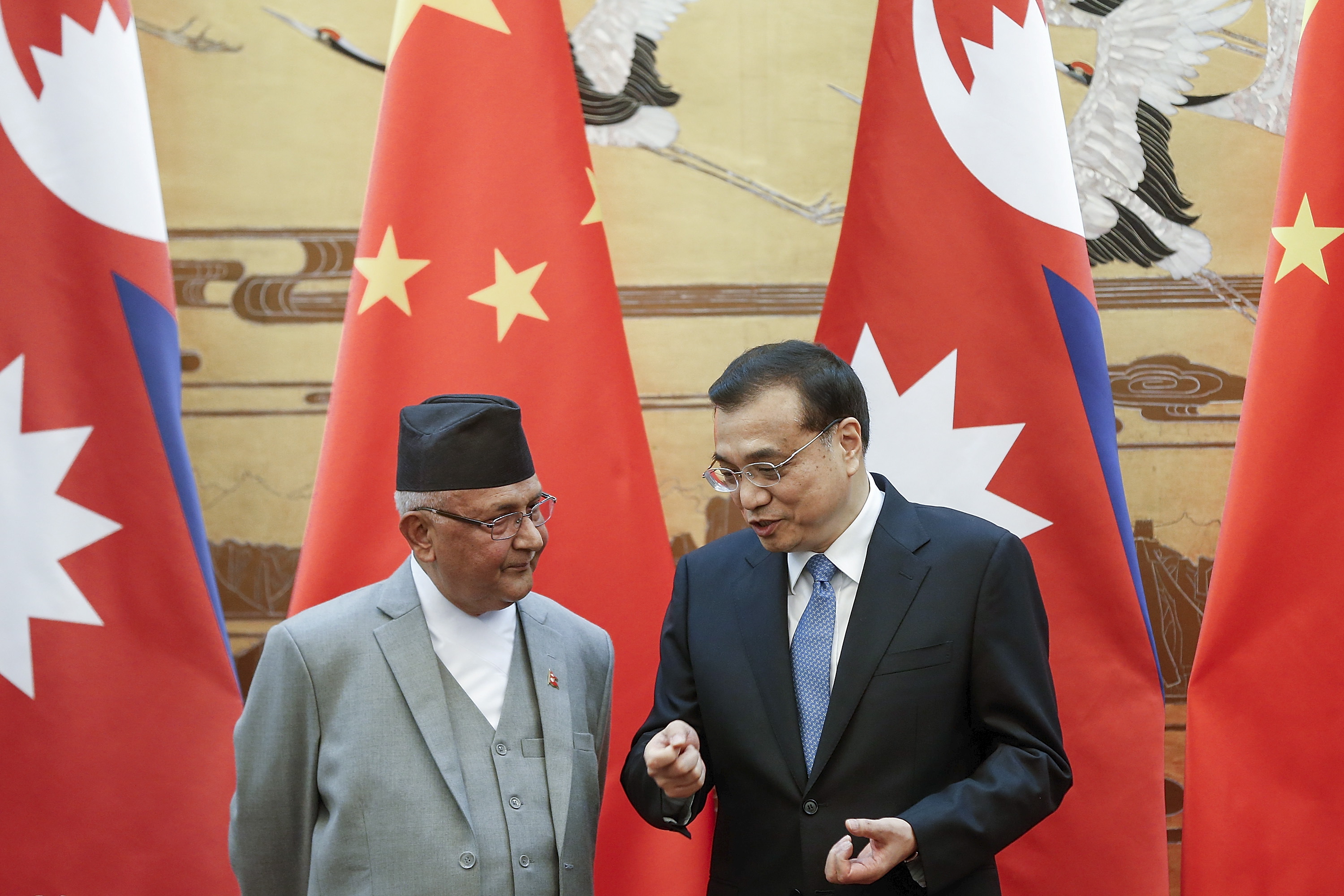 Nepalese Prime Minister K P Oli arrived in Beijing on Tuesday with a high-powered delegation that includes half a dozen senior ministers, officials, business heads and journalists. This is his second visit to Beijing as prime minister; the first, in March 2016, saw a flurry of agreements signed, though not many were implemented, as within five months the Maoists had walked out of his coalition, leading to the fall of his government.

The deeper reason for this failure to implement those understandings, of course, had been Oli’s serious tensions with New Delhi. Their varying views on the framing of Nepal’s new constitution had triggered a prolonged agitation by Madhesis, resulting in a two-month blockade on border trade, causing serious economic and humanitarian crisis. But this only pushed Nepal further toward Beijing, as Oli was forced to sign an agreement to import as much as one-third of its fuel needs from China, which had not only broken India’s monopoly on fuel supplies but further reinforced Oli’s pro-Beijing image in New Delhi.

Oli as well, both before and after becoming prime minister in October 2015, had constantly accused India of interfering in Nepal’s domestic politics. There were reports of him planning to do away with the tradition of visiting India first by going first to China. In the end, Oli visited Beijing within four weeks of his much delayed February 2016 visit to New Delhi, where the two sides even failed to issue a joint communiqué.

All sides, however, have learned their lessons from their recent history and Prime Minister Oli comes to Beijing this time on rather solid footing with a determined focus on carefully balancing Nepal’s ties with both India and China.

After taking office as prime minister in February this year, not only did Oli immediately begin planning a visit to New Delhi, which took place during the first week of April, but within four weeks Indian Prime Minister Narendra Modi reciprocated with a two-day visit traversing various cities of this Himalayan republic. Both have since sought to underline their religious-cultural links, with India promising accelerate implementation of various projects including an offer to build a rail link from Raxaul to Kathmandu. Modi’s new orientation seeks to differentiate India’s Nepal policy from that of Beijing, which remains focused primarily on building economic and commercial partnerships.

It is against this backdrop that this ongoing six-day visit by Oli is expected to mark a reset in China-Nepal ties. This will see both sides not only fine-tuning several previous understandings that were evolved during Oli’s first visit during 2016 but launch several new bold initiatives.

During his 2016 visit Oli signed a transit trade treaty to reduce his landlocked country’s dependence on India and sought expansion of rail and road links through Tibet. Most likely this week will see China and Nepal signing agreements for expanding their trade and transit by opening check posts at eight places along their border, for laying an optical-fiber cable network, constructing the 1,000-megawatt Lower Manang Marsyangdi Hydroelectric project and transmission lines.

The two sides will also set up a joint mechanism to identify and address problems in their existing projects and fast-forward their previously agreed Kerung-Rasuwagadhi-Kathmandu Railway link including building two friendship bridges in the Lhasa and Rasuwa sectors and for identifying new projects as part of China’s Belt and Road Initiative (BRI). China will be setting up Disaster Management and Rescue Centers in each of Nepal’s seven provinces.

But it would be misleading to say nothing about their challenges. Among the tougher ones are repeated reminders by New Delhi to Nepal that it will not buy any electricity generated from China’s hydroelectric projects. This had led to media reports of Nepal canceling China’s West Seti hydropower project in addition to the already canceled 1,200MW Budhi Gandaki hydropower project. But according to China’s Foreign Ministry, Chinese companies have been in renegotiations on all these projects and some of this cobwebs may be cleared away this week.

Similarly, the ambitious China-Nepal-India Economic Corridor would involve addressing issues of Nepal’s porous borders with India as well as the unique relationship that Nepal has had with India. After his meeting with Nepalese Foreign Minister Pradeep Kumar Gyawali in April, Wang Yi announced that China and Nepal had agreed in principle to “a long-term vision of a multidimensional cross-Himalaya connectivity network” involving links through ports, railways, highways, aviation, power and communications.

Given that Nepal has already signed a memorandum of understanding to be part of the BRI, Wang thought it apt to propose a China-Nepal-India Economic Corridor formally to his Indian counterpart Sushma Swaraj, who was visiting Beijing to attend the Shanghai Cooperation Organization foreign ministers’ meet. But such an “early harvest” approach by China may find India slow and skeptical, which calls for China-Nepal parleys in this matter to stay alert to India’s significance and sensitivities.