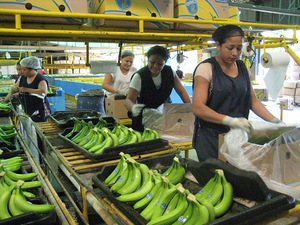 The new wave of free trade agreements, written by and for corporate interests, provides little or no benefits for workers, communities, or the environment. Provisions being laid in these new trade deals turn most developing countries into sources of cheap and unprotected labour for transnational companies. Labour rights are being redefined in a way that allows transnational companies to condone the violation of workers’ fundamental rights. Once these agreements are signed and ratified, the only legal protection that will fully stand is the abolition of slavery. All other labour rights will be disposable at the companies’ discretion under a wide range of circumstances.

Transnational supply chains have been an expanding economic actor since transnational corporations began outsourcing manufacturing to places where extremely low wages, low or non-existing labour safety standards and even slave labour prevailed or were tolerated. While they have existed since colonial times, supply chains have emerged forcefully in their modern fashion as a consequence of free trade agreements. According to different sources, transnational supply chains currently account for 30 to 60 per cent of all global trade, and depend on the work of over 100 million workers globally. [1]

Transnational supply chains are highly and critically dependent on trade rules. Therefore, they have become central in the latest trade agreements and negotiations. Some of the contents of the Trans-Pacific Partnership (TPP) are quite telling on what can be expected if TPP and other similar trade agreements are implemented: while transnational supply chains will expand, labour conditions will continue worsening. Tax cuts for corporations, increased corporate concentration and vertical integration, and a new era of corporate privileges will also be part of the menu.

This report focuses on the foreseeable impacts of the TPP provisions on labour conditions.