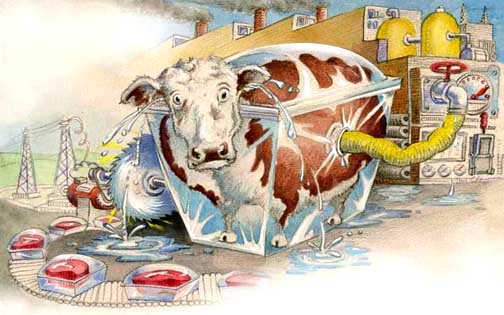 Minneapolis—The finalized U.S.-Mexico-Canada Agreement (or New NAFTA) announced today after an agreement between House Democrats and the White House retains many of the faults of the original NAFTA, which locks in a system of agribusiness exploitation of farmers and workers in the three participating nations, while worsening the climate crisis.

The original North American Free Trade Agreement (NAFTA) promised an economic windfall, but in reality, resulted in devastating losses for farmers and the consolidation of agribusiness and farmland ownership in the U.S., Mexico and Canada. With nearly all agriculture tariffs eliminated under the original NAFTA, New NAFTA will have little impact on agricultural trade. Nothing in the New NAFTA addresses urgent issues plaguing our farm economy : low prices, rising debt and increased bankruptcy. The new deal ignores the requests of farm groups to include mandatory Country of Origin Labeling, which would benefit farmers and consumers.

“New NAFTA does not fix the problems created by decades of unfair trade and increasing corporate concentration in our food system under its predecessor,” said Karen Hansen-Kuhn, program director at the Institute of Agriculture and Trade Policy. “Rather, it will increase agribusiness exports in a race to the bottom, further limit regulation of food safety and intensify environmental impacts of industrial agriculture – policies that will worsen both farmers’ economic straits and the safety of our food.”

Measures in New NAFTA that open Canada’s dairy market to increased exports from the U.S. will not significantly reduce the vast oversupply of U.S. milk or raise prices paid to U.S. dairy farmers. Instead, the opening will weaken Canada’s successful supply management program, which has achieved market-based prosperity for its farmers. Added regulatory-focused sections will delay and impede the development, enactment and enforcement of protections for consumers, workers and the environment.

This New NAFTA reflects the Trump administration’s denial of the climate crisis, and in fact, creates incentives for the fossil fuel industry to off-shore pollution into Mexico. New NAFTA repeats past mistakes by granting special legal rights to high emitting sectors like the oil and gas industry to challenge future Mexican laws and regulations protecting the environment.

Family farm, healthy foods and fair-trade organizations demanded a replacement for NAFTA that fixes the problems created under the existing trade deal. The new agreement does not respond to these demands, instead perpetuating trade rules that have devastated family farms and expanded corporate control over agriculture and food systems in the U.S., Canada and Mexico. Congress should reject this agreement.

Based in Minneapolis with offices in Washington, D.C., and Berlin, Germany, the Institute for Agriculture and Trade Policy (IATP) works locally and globally at the intersection of policy and practice to ensure fair and sustainable food, farm and trade systems. More information on New NAFTA and IATP’s research and analysis of the trade deal can be found at our NAFTA portal.