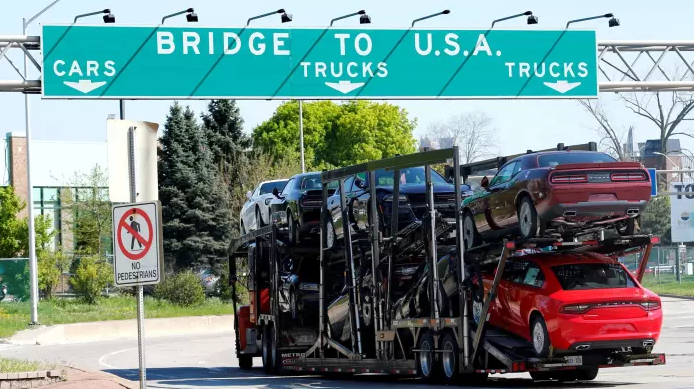 New Nafta teed up by US House Committee for floor vote

A Democratic-led House committee advanced the U.S.-Mexico-Canada free trade agreement — Donald Trump’s top legislative priority — even as the chamber prepares to impeach the president on Wednesday.

The trade accord to revamp Nafta cleared the Ways and Means Committee Tuesday, sending the measure to the full House where a vote is slated for Thursday.

The Republican-led Senate, however, won’t take up the trade agreement until next year, after the chamber concludes the impeachment trial in which it is expected to acquit Trump and decide not to remove him from office. Overhauling Nafta will give Trump a much-needed political win heading into his re-election campaign in 2020.

The bill cleared by the House’s tax and trade committee Tuesday makes all the changes necessary to update U.S. law to bring it in line with the agreement replacing Nafta. The legislation can’t be amended and it will need just a simple majority to pass the Senate, according to fast-track trade powers Congress gave the president in 2015.

While the leaders of Canada, Mexico and the U.S. signed an initial version of the USMCA in November 2018, Democrats were successful in making changes to labor, environment, enforcement and drug patent protection provisions in the deal. House Speaker Nancy Pelosi announced the deal last week and praised the updated version as a model for future trade deals.

“The improvements we negotiated to the USMCA finally make the agreement enforceable,” Chairman Richard Neal, a Massachusetts Democrat, said during the committee hearing. He said the agreement would now allow customs agents to block illegally harvested timber and wildlife, while cleaning up water pollution on the U.S.-Mexico border.

The renegotiated USMCA will create a new labor-enforcement mechanism for fast-track panels to investigate labor violations, which can be punished with factory-specific tariffs or import bans. The provision led U.S. unions led by the AFL-CIO to endorse the deal and for trade skeptics like Senator Sherrod Brown, an Ohio Democrat, to pledge support.

Mexico this week objected to a provision in the bill funding five labor attaches in the U.S. Embassy in Mexico City to monitor workers’ rights. The Mexican government dropped their objection Monday after the Trump administration clarified that these attaches would not be carrying out factory workplace inspections.

The bill provides $843 million of U.S. taxpayer money to implement the accord, including funds to help Mexico examine union contracts as part of its new labor law.

The USMCA is projected to have a small effect on the overall U.S. economy, adding just 0.35% to GDP after six years according to an official U.S. estimate. Still, the deal will resolve some of the uncertainty hanging over agriculture and manufacturing production chains in North America, giving both Trump and moderate Democrats a political win.

The Ways and Means Committee’s top Republican, Kevin Brady of Texas, urged his GOP colleagues to vote for the bill.