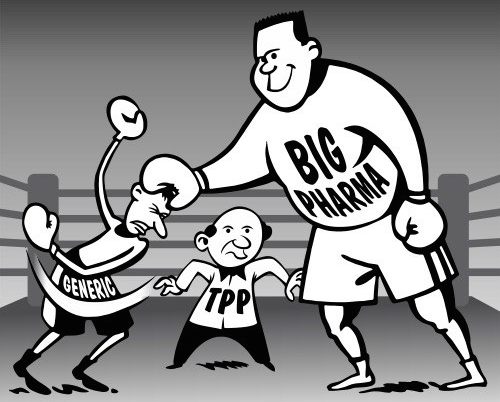 A new research paper, co-authored by public health experts Deborah Gleeson, Joel Lexchin, Ruth Lopert and Burcu Kilic, explains the impact that the intellectual property chapter of the original Trans-Pacific Partnership could have on access to medicines in each of the TPP countries. As the TPP-11 meet this week to attempt to revive the TPP without the US, the research findings show how damaging the original medicine proposals would be.

Although the majority of TPP countries pushed back against the U.S. pharmaceutical industry during the original TPP negotiations, the Intellectual Property chapter of the final text still contains several provisions that will extend medicine monopolies (these are listed on pages 8-9). As Gleeson et al. explain, developing countries would bear the brunt of these provisions.

Despite claims from the pharmaceutical industry, there is no positive correlation between increased medicine monopolies and investment by pharmaceutical companies in developing countries (p. 25). However, the TPP proposals would oblige developing countries to introduce stronger intellectual property provisions than those in the WTO TRIPS agreement. This would delay access to cheaper versions of medicines and increase the costs of medicines for individuals and governments (p. 21).

The authors found that any other market access economic benefits derived from participation in the TPP were unlikely to counterbalance these costs, even with US participation. It follows that this would be even less likely without access to the US market. While developing countries will certainly face higher costs if the TPP is implemented in its original form, the authors warn that Australia and New Zealand’s pharmaceutical programs will also face additional costs – ‘possibly amounting to hundreds of millions of dollars per annum’ (p. 22).