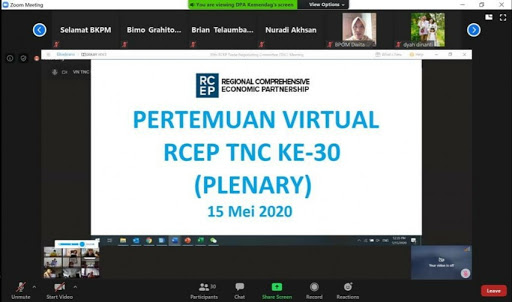 In the middle of a global pandemic Covid-19, Indonesia intensifies the stalled negotiations of the 30th round Negotiations of Regional Comprehensive Economic Partnership (RCEP) held by the virtual, this May. The meeting is a continuation of the 29th talks, which was also held virtually in April.

Steps to intensify these talks are mandated by the heads of RCEP member countries targets to sign agreement negotiations this year.

At the 30th round negotiations, ASEAN Negotiating Director, Donna Gultom, led the delegation of Indonesia, supported by a range of team RCEP from various ministries/agencies.

Although held in a virtual, a lot of the progress has been achieved from the meeting, including efforts to bring India back into RCEP negotiations through the "Proposed Package to Address india’s Outstanding Issues."

After a series of meetings, the follow up will report to the ministers that the plan will meet in June.

Scope of which focuses on this agreement, among others, trade in goods, services, investment, intellectual property, e-commerce, economic cooperation, and technical, legal, and institutional areas, including dispute resolution.