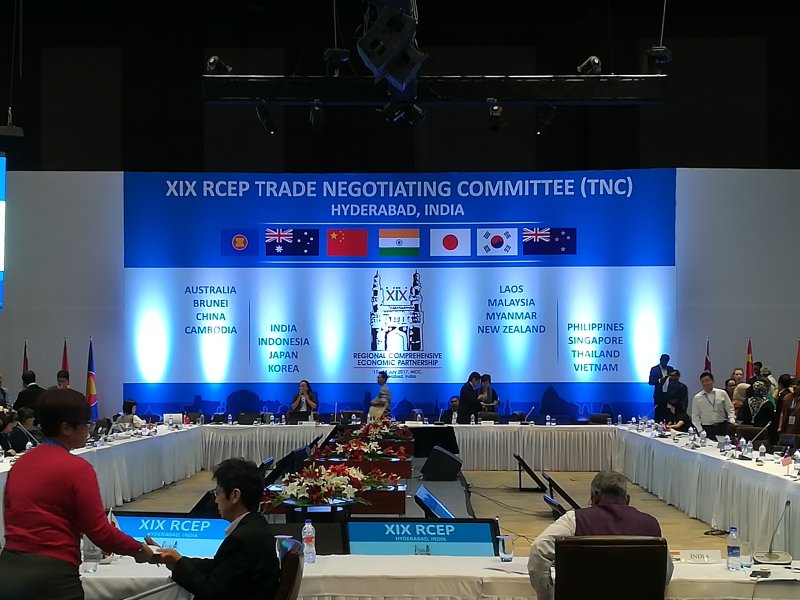 The chief negotiator for New Zealand, at the Asia trade pact talks in Hyderabad this week, made pointed reference to TRIPS-plus (Trade-Related Aspects of Intellectual Property Rights) provisions, saying that while the TRIPS agreement on intellectual property rights was sufficient, it was up to the countries to analyse whether TRIPS-plus provisions would support innovation or whether they would result in additional and excessive costs.

The comments, which were made in a two-hour stakeholder consultation held on July 25 according to sources, could have implications on medicine access for the world as well as India’s generic pharmaceutical industry.

Negotiators from 16 countries met in Hyderabad this week for the 19th round of the Regional Comprehensive Economic Partnership (RCEP) to discuss trade issues with impacts on several sectors such as agriculture, livestock, e-commerce and pharmaceuticals. The talks are directed towards the formulation of a free trade agreement (FTA) between 10 ASEAN states and six countries with which ASEAN states have existing FTAs (Australia, China, India, Japan, South Korea and New Zealand). Because of the countries it covers, decisions taken at RCEP will impact nearly 50% of the world’s population.

The Trade-Related Aspects of Intellectual Property Rights (TRIPS) regime is an international agreement on intellectual property rights administered by the World Trade Organization (WTO). RCEP members are already subject to TRIPS obligations. However, states like Japan and South Korea have been pushing for new obligations on patents through RCEP, known as TRIPS-plus.

India is currently a TRIPS compliant state, but has been resisting efforts by countries to push for a TRIPS-plus scenario. The implications of intellectual property regulations via TRIPS, is felt on pharmaceuticals as well as seeds, both of which are significant to India.

New Zealand’s chief negotiator, Mark Trainor, made these comments in response to concerns and questions raised by civil society members regarding the impact of RCEP on intellectual property rights and its subsequent impact on Indian generic drug production.

Sources at the event said they had asked the negotiators pointed questions on whether negotiators would be supporting Japan and South Korea’s efforts towards an intellectual property regime tilted towards protecting pharmaceutical profits,or whether they would support access to medicines for the developing world.

While most negotiators including the Indian delegates were silent or non-committal, Trainor’s comments provide a sliver of insight into what has otherwise been closed door talks without significant consultation. The career diplomat who has served as ambassador to Brazil and as advisor in the ministry of foreign affairs and trade said that New Zealand supports the use of intellectual property rights, to the extent that it supports innovation and creativity. Although his comments were also non-committal in so far as it supported TRIPS but also left space for TRIPS-plus, for now the comments are an indication that the talks have not yet moved decisively into a TRIPs-plus situation.

The consultation was attended by about 37 individuals, representing 25 organizations, from 6 countries. Nearly 600 other interested individuals and organisations, coming together under the banner of the ‘People’s Resistance Forum,’ boycotted this consultation, calling it a “sham,” and instead have been demanding more transparency from the negotiations, and a discussion in the ongoing session of parliament. The India-round of negotiations has been marked by regular protests since it began on 17 July. Protests have also been common at all other rounds of negotiations, held in different ASEAN countries.

The apprehensions stem from a leaked draft of the negotiating texts in 2015, which showed that Japan and South Korea were pushing for provisions known as TRIPS-plus, as they go beyond TRIPS obligations by WTO. Some of these provisions would extend patent terms of pharmaceutical companies beyond the status quo of 20 years. These provisions also seek data exclusivity, which would limit competition. Much of the TRIPs-plus thinking also believes that patents are important to protect and promote further research. This is met by opposition from the lobby that seeks to promote more generic and affordable drugs.

What stakeholders told the negotiators

“I’m a person living with HIV. Its fine for countries to talk about a ‘give and take’ in these trade talks. But I told the delegates, that my life cannot be taken, in this bargain,” says Loon Gangte, South Asia coordinator at the International Treatment Preparedness Coalition. The Indian generic industry has been crucial to the scaling up of treatment for people with HIV AIDS and also makes medicines for tuberculosis and hepatitis C, which often come as co-infections with HIV.

Sally Nita from the Indonesia AIDS Coalition made a similar emotional appeal. She recounted a story of friend of hers who died just a few months before the sofosbuvir generic for hepatitis C was launched. He died from HIV-Hepatitis C co-infection. “Aren’t you aware that data exclusivity could endanger millions of people around the world who rely on generics,” she said to delegates. “Please use your conscience and stop making profit from the sick,” she said, ending her address.

On the issue of a scaling up of the current patent regime, Leena Menghaney of MSF’s Access Campaign says, “In my presentation I did not link intellectual property to research and development. The fact is that out of the $600 billion generated from the sale of branded medicines, only 16% make it to research and development. The rest is siphoned off by pharmaceutical companies. This is why we are struggling to find the money to research drugs for neglected diseases- because we are a market based system.”

On the same issue, James Love of Knowledge Ecology International reminded officials that the UN Secretary-General’s High-Level Panel on Access To Medicines asked countries to avoid TRIPS-plus provisions and he said RCEP’s proposals conflict with this. He also called for delinkage- the delinking of research and development costs, from prices of drugs. Love also suggested alternative language on delinkage to the RCEP text which would allow a member state to suspend any RCEP requirement which exceeds WTO requirements on patents. With regards to the pressure from Japan and Soputh Korea, he said “these measures are designed to expand and extend monopolies, leading to high prices on products.”

Shoko Uchida from the Pacific Asia Resource Center in Japan, used her presentation to talk to negotiators about the controversial investor-state dispute settlement (ISDS) mechanism which was tabled by Japan and Korea. According to leaked texts of the ISDS chapter, it would allow corporates the right to sue governments with international arbitration and bypass domestic legal mechanisms.

Although the New Zealand negotiator’s comments did not confirm a move towards TRIPS-plus, it remains worrying for RCEP-watchers.

“We were shocked that the New Zealand negotiator spoke about TRIPS-plus. Japan is trying to push Trans Pacific Partnership (TPP) provisions through RCEP, even though TPP has itself fallen apart. This is becoming a big problem for developing countries. It’s a shame,” says Uchida. “India’s role in RCEP is very important, along with China. This is because the strong countries of Japan, Korea, Australia and New Zealand are all on one side. India has been opposing pressures on its generic industry, as well as high tariffs, and the ISDS. If India suddenly changes this, it will be a big turn around,” she says.

The next round of RCEP talks is scheduled to be a ministerial round. Significant decisions are expected to be announced then.