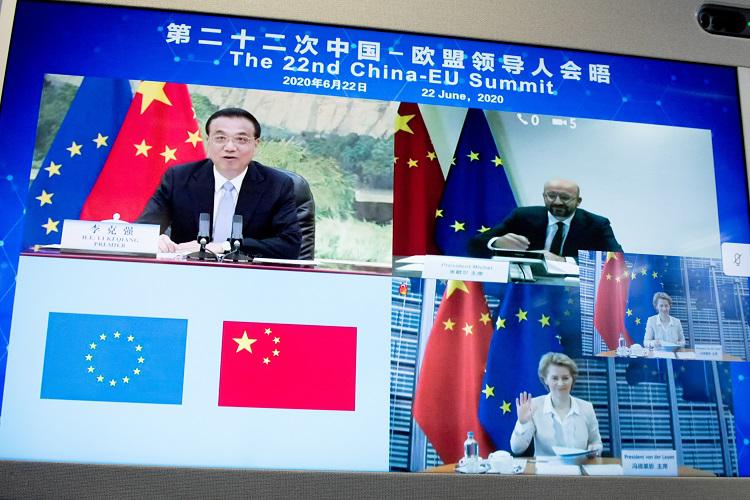 By Alexandra Brzozowski and Jorge Valero

No tangible progress was made on several key issues as leaders from the EU and China met for a tense virtual summit on Monday (22 June), amid tensions over tariffs targeting Chinese firms and Europe’s fears over Beijing’s growing global authority.

Talks between Commission President Ursula von der Leyen and Council President Charles Michel with Premier Li Keqiang and President Xi Jinping came after an EU-China summit planned for September in Leipzig, Germany, had been postponed, officially due to the COVID-19 pandemic, though diplomats said it was in part because of the impasse in investment negotiations.

Beijing believes cooperation with the EU outweighs competition and is willing to liaise with the bloc on COVID-19 vaccine and treatment development, China’s premier Li Keqiang said after the meeting, according to Chinese state media.

However, the talks did not produce a joint statement as summits usually do, and China “did not offer” to hold a joint press point afterwards, a Commission official said.

“What is needed to break the deadlock is engagement at high political level,” a European Commission official said ahead of the talks with the hope the meeting would provide the momentum.

While the China partnership would be “crucial”, Von der Leyen stressed that “for our relations to develop further, they must become more rules-based and reciprocal, in order to achieve a real level playing-field,” she added.

The EU insisted on key demands for a bilateral investment treaty that would improve market access and address structural economic imbalances and raised the issue of Hong, according to EU chief diplomat Josep Borrell.

“There are still quite important differences [on the investment agreement],” bloc’s foreign policy chief Josep Borrell told a webinar just after the talks.

No progress was also made to grant

“We need to resolve concrete problems,” Michel said after the meeting.

“We need to follow up on these commitments urgently and we also need to have more ambition on the Chinese side in order to conclude negotiations on an investment agreement,” she continued.

Europeans are especially concerned about market access, the forced transfer of technology imposed on foreign firms operating in China, the subsidies offered by Beijing to its companies, the unbalanced relation in the public procurement market, or the lack of engagement of the Chinese side to reform the World Trade Organisation.

These differences hampered the progress to reach a bilateral towards a China-EU investment agreement to be concluded by the end of the year under the German EU presidency, as both sides hoped.

“It is time to accelerate the crucial areas of our relationship”, Von der Leyen urged, calling on her Chinese counterparts to meet “our level of ambition.”

She also warned that, if progress is not made on the investment deal, it would be “difficult” to develop the ‘Agenda 2025’ that will frame the future bilateral relationship.

“We have the intentions to work together, they have the words put on paper, but we also need the deeds and we also need to see that there is really improvement on the topics where we have different opinions,” she insisted.

“We are not naive… we are aware of our huge differences”, Michel added.

Last week, Beijing’s Ambassador to the EU suggested the joint talks were a chance to make relations “more productive and substantive” but at the same time criticised Brussels over plans for tougher rules for heavily subsidised foreign companies, which would particularly target Chinese firms, saying the EU was not practising the openness it preached to others.

“We urge China to commit to climate neutrality as soon as possible after 2050,” Von der Leyen stressed, adding that the bloc expects China to step up its commitments under the Paris Agreement.

EU officials said they believe China’s post-pandemic recovery plan would be “dangerous” because the approach would be business-as-usual instead of looking for ways to a more sustainable future.

“China is starting an emission trading system, but it has made this announcement three times already – we offered assistance – deep contradictions that need to be solved,” a senior EU official said.

“We’d like China to join global initiatives and stop hiding behind the table,” the official added.

In May, EU governments expressed “grave concern” over China’s security law for Hong Kong, which democracy activists, diplomats and some businesses say will jeopardise its semi-autonomous status and role as a global financial hub.

On Friday (19 June), the European Parliament strongly condemned the new law as an assault on Hong Kong’s autonomy in a resolution and recommended that EU and members states file a case before the International Court of Justice, if the new national security law for Hong Kong is applied.

China’s National People’s Congress, which is due to pass the law as soon as next Sunday, reacted angrily on Saturday (20 June) in response to the resolution.

“We expressed our great concern about the proposed national security law for Hong Kong,” Michel said after the talks, adding that the bloc called on Beijing to ensure political pluralism, democratic standards and human rights in Hong Kong.

“For the EU, human rights and fundamental freedoms are non-negotiable – we always raise our concerns, so was it today too, and insist we have our view on this topics,” Von der Leyen told reporters.