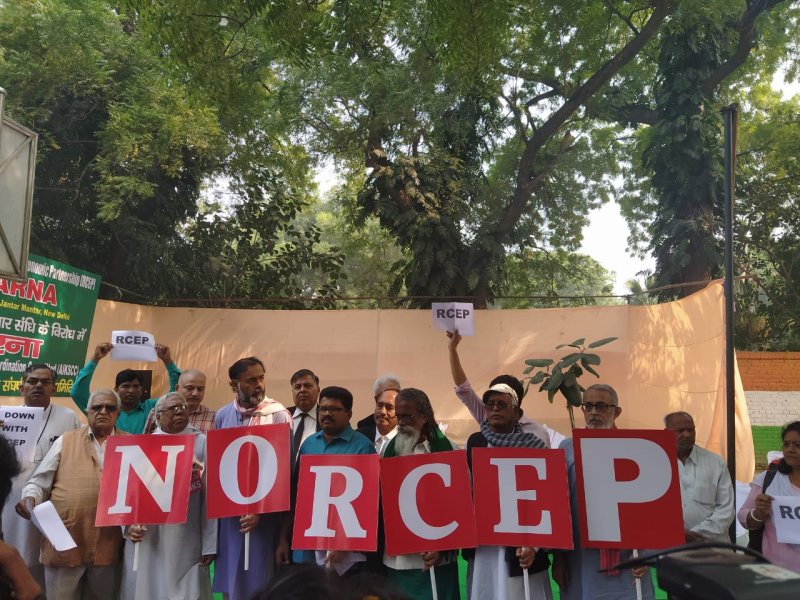 No RCEP is better than a bad deal for India

Statement from the Forum for Trade Justice, 4 November 2019, New Delhi

The Regional Comprehensive Economic Partnership (RCEP) is the most ambitious and far reaching free trade agreement (FTA) that India has negotiated. After seven years of negotiations on 25 chapters that aim to open up and deregulate laws on issues such as agriculture, manufacturing, intellectual property, investment, competition and electronic commerce, India is now under tremendous pressure to sign the deal. Prime Minister Modi is in Thailand today alongwith heads of state from 15 other RCEP participating countries to take the decision.

The Forum for Trade Justice – a pan India people’s network, is of the opinion that the Government of India should not agree to the RCEP as it will be a bad deal for democracy, for farmers, workers, will subvert our sovereign laws and compromise India’s industrialisation potential, especially in the emerging critical arena of the digital economy. Further RCEP provisions will undermine access to medicines, seeds, quality public services and the government’s ability to regulate foreign investment in the public interest.

There have been unprecedented protests across the country from a wide range of constituencies against the RCEP. This includes national and regional political parties and state governments such as Kerala and Punjab. Industry associations representing the automobile, steel, aluminium, copper, dairy, textiles, pharmaceuticals and the bicycles sector have argued that RCEP will lead to deindustrialisation. Trade Unions have stated that there will be further job losses in labour intensive sectors that are already reeling under heavy import competition and low growth rates. Farmer’s movements representing millions of small and medium farmers across the length and breadth of the country have provided evidence of how international competition in vegetable oil, oil seeds, pepper, cardamom, rubber and coconut products have already devastated livelihoods. Patients groups fear that intellectual property provisions will prevent access to affordable lifesaving generic medicines. If India accedes to demands on free data flows, no customs duties and no data localisation, the promise of digital industrialisation will remain a mirage and foreign tech firms will dominate this critical sector.

Rather than listen to dubious advice and endorse reports that represent narrow interests and perpetuate neo-liberal dogma, the Government should desist from signing the RCEP. Instead the NDA Government, through the Ministry of Commerce and Industry, should immediately start a process of democratisation of trade policy, as none of the affected constituencies have been consulted so far. It should make public its assessments of previous FTAs, and begin a transparent process of meaningful consultations with the Union Parliament, state assemblies, relevant governmental departments and various affected constituencies such as farmers, workers, women, tribals, fisherfolk, patients and other marginalised groups. Trade policy should reflect and respond to the needs of citizens and not the transnational business class nor the political elite.

The failure to reach a deal in Nonthaburi today is a victory for people’s movements. It is a sign that the hundreds of protests across the country led by farmer’s movements, trade unions and other groups forced the Indian Government to back off from signing this unequal treaty. The attempt now is to conclude the RCEP by February 2020 and people’s movements will continue to put pressure on the Government to permanently withdraw from free trade deals such as the RCEP and work towards building a more equitable, just and inclusive trade policy.