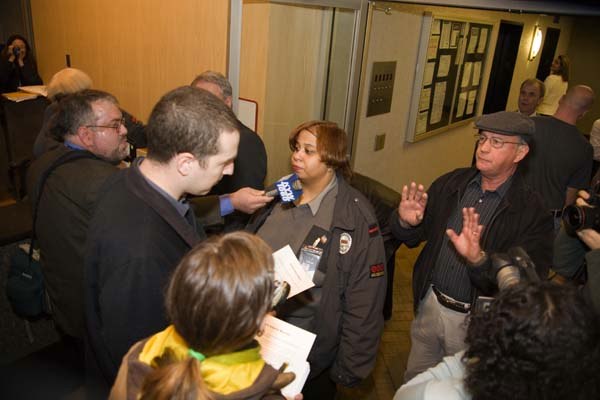 Protesters with Casino-Free Philadelphia attempt a citizen’s search and seizure at the Pennsylvania Gaming Control Board. (WNV/Chris Meck)

Not a hacker or whistleblower? Here’s how you can still liberate secret documents

Forty years ago a tiny group of antiwar protesters picked locks at the Federal Bureau of Investigation offices in Media, Pa. They stuffed briefcases with confidential documents which they later released to reporters. Their act was brazen and planned with meticulous detail.

In fact, recent reports have made it so heroic and harrowing that it appears to be the kind of thing many of us would never imagine doing.

The group was successful in uncovering expansive and unchecked spying on civil rights leaders, antiwar organizers, suspected Communists, and activists of many stripes — including the shocking revelation that FBI agents had sent anonymous letters to Martin Luther King, Jr. threatening to expose his extramarital affairs if he didn’t commit suicide and the first public reference to COINTELPRO.

What’s interesting about this story is that it’s wildly atypical — nobody has done something quite like it since. With the increase of security cameras and surveillance technology it’s no wonder.

But another set of tactics have emerged to gain access to documents when whistleblowers leaking documents are nowhere to be found and the courts and politicians are opposed to openness and transparency.

All you need is a group of folks who want access to information — and a willingness to take risks for it. These are tactics available even to people who don’t have advanced computer hacking skills or inside access to become whistleblowers.

Halting the Free Trade Area of the Americas

The release of the FBI documents was truly daring and marked by the utmost secrecy. But in 2001, a Canadian group called Operation SalAMI came up with a very different way to force the government to release closely-guarded documents. Operation SalAMI’s aim was to release the highly-secretive top-level negotiating texts for the Free Trade Area of the Americas, or FTAA, a situation very similar to the Trans-Pacific Partnership being negotiated right now.

The FTAA was intended to be a free trade treaty to unite all North and South American countries — except for Cuba — into a single trade zone. Backed heavily by the U.S. government, it was a NAFTA-like expansion that would “level the playing field” for economic growth — in other words, lower the bar for environmental, social and labor protections. It was not the first such attempt at large agreements of this kind. Previous attempts, like the Multilateral Agreement on Investments and expansion of the World Trade Organization, had been scuttled by protesters and Global South nations a few years earlier.

To reduce public resistance, the FTAA was kept extraordinarily secret. No unions or civil society organizations were allowed access to the negotiating texts. Even senators, congressmen and members of parliament were not allowed access. Only heads of state and their staff — plus the heads of a handful of corporations who were involved in the negotiations — were given confidential access to the documents.

The likelihood that Operation SalAMI’s ragtag group would be able to successfully get around the security at the Department of Foreign Affairs and Trade, where the texts were likely held, was not high. They could have plunged all their energy into joining the protests outside the FTAA negotiations a month later in Quebec City, but they wanted to stay on the offensive and not allow their opponents to choose the time and place of their actions. And they saw a chance to expose the transparency being violated in a way that would encourage reluctant allies to join.

It was then that one of their leaders, Philippe Duhamel, woke up with an idea.

He was inspired by Mohandas Gandhi’s salt raid of the salt depot in Dharasana. After his famous Salt March, Gandhi had escalated by announcing publicly that Indians would take-over the salt depot. For that, he was finally arrested; but the raid continued and became a turning point in Britain’s international standing.

The plan was to go to the Department of Foreign Affairs and Trade building and “liberate” the texts. Completely unlike the successful FBI raid by protesters, the plans’ hallmark would be near complete transparency. Operation SalAMI sent an ultimatum to the Canadian government requiring it to publish the entire document in French, English, Spanish and Portuguese — or the group would have to “retrieve the documents ourselves.”

As hoped for, the ultimatum was controversial. Is that kind of action acceptable? What will happen when they do it? Why are the documents secret? Pressure was building.

When the Canadian government failed to give up the documents on the activists’ timeline, 80 protesters performed the search and seizure operation. Like Gandhi’s salt raid, it was not “play-acting” but open, public defiance as people crossed over police barricades to enter the Department of Foreign Affairs and Trade building, which was shut down. Some even dressed as Robin Hood.

That open action — and the months of debate leading up to it — made it possible to attract allies. Even some conservative newspapers and groups swung in favor of the release of the documents. Enough pressure mounted that just a few weeks later the Canadian government buckled and announced it would unilaterally release the negotiating texts.

Under a barrage of attacks on the now-public texts, the FTAA fell apart soon after. But the citizen’s search and seizure as a tactic continued to grow and was carried to completely different movements.

Casino-Free Philadelphia’s situation was completely different — fighting two billionaire-backed casinos forcing their way into the city. Pennsylvania’s governor was dead-set on introducing casinos to the state, orchestrating a middle-of-the-night bill legalizing gambling. He supported the casinos’ development despite the fact that they would be built near schools and even addiction treatment centers.

Like Operation SalAMI, Casino-Free Philadelphia sent an ultimatum to the PGCB’s director Tad Decker declaring that “if the documents are not released by December 1, then we will be forced to release them ourselves.” It upped the ante by doing a media-savvy action each week leading up to the deadline — such as washing the windows of the PGCB “to help them become more transparent,” or performing a practice document search during PGCB hearings, where they grabbed magnifying glasses and asked lawyers and staff to open their briefcases for investigation. (They did not comply). They even encouraged whistleblowers, sending brown envelopes to staff.

By December 1, press attention had grown and political pressure had increased — even the most weaselly politician didn’t want to appear on the wrong side of transparency. The PGCB had even been forced to release a few minor documents.

Whereas the FBI raid had been merely about getting the documents, the transparent search and seizure used time as a way to drum up interest. Like a good mystery writer, the Casino-Free Philadelphia allies were going to stoke interest by creating a story with an unknown ending. It captured the interest of media, politicians and regular people — exactly what a rally or march wouldn’t have done. People wanted to know what would happen with the search.

A week after the deadline passed, Casino-Free Philadelphia arrived outside the PGCB offices. Two by two they stepped forward and read a citizen’s search warrant. Then the protesters raised their iconic magnifying glasses and headed into the offices. They were stopped immediately by police who, after some confusion, arrested the “Philly Phourteen” — as they dubbed themselves.

But the next day a series of incriminating editorials and scathing articles were published about the PGCB’s treatment of citizens demanding what made sense to most people. Egged on by the promise to keep escalating, the PGCB released 98 percent of the documents that were requested. Of course that was only a first step on their long road to successfully halting the two casinos — but it was a meaningful one unto itself. (I tell that complete story of Casino-Free Philadelphia in my book Strategy and Soul).

The documents are yours

The search and seizure tactic has since been used by environmentalists in the United Kingdom seeking to halt a controversial road building project and unsuccessfully by the Canadian Union of Postal Workers in an attempt to fight back against the government’s slow destruction of the public postal system.

It stands as a reminder of the philosophy that it is important in direct action to act out your rights. When there are documents that the public has a right to know about, we have a right to go take them.

Daniel Hunter is a trainer and organizer with Training for Change, and has trained thousands of activists including ethnic minorities in Burma, pastors in Sierra Leone, independence activists in northeast India, environmentalists in Australia, and Indonesian religious leaders.