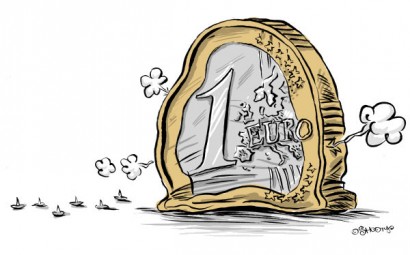 The deeper motivation is to secure and expand relations with Asia-Pacific in a world of an increasing bilateralism and a still unresolved Euro crisis.

On the road to Asia: why Germany and the Eurozone want a trade deal with Australia

Shortly after the G20 summit in Brisbane, German Chancellor Angela Merkel and Australian Prime Minister Tony Abbott announced initiatives to increase trade and investment relations between Germany and Australia. Both parties agreed to set up a joint working group to identify future initiatives. What can we reasonably expect from it?

• Bilateral trade in goods between Australia and Germany is grossly unbalanced, with Germany’s exports in 2013 standing at A$11.4 billion while imports from Australia were just A$1.9 billion.

• Germany’s exports are concentrated on machinery (35%) and transportation equipment (30%) while Australia’s exports are heavily biased toward minerals.

• Germany’s exports of services count for only 13% of total German exports to Australia, while Australia is relatively strong in exporting services to Germany, though at a low level of A$1.1 billion. By contrast, the UK service exports dominate their total export to Australia.

What is at stake for Germany and Europe? Three major points are worth highlighting:

A first and simple argument recognises that Germany is a very successful exporter of manufactures, which follows an export-led growth model. As such, it is self-evident that Germany has an interest in boosting its exports.

But the current bilateral trade and investment pattern show that Germany’s success depends largely on arm’s length trade in a few industries, reflecting these particular strengths of the German economy. Additionally and related, FDI are underdeveloped, partly because FDI in manufacturing requires high up-front investment costs, which may not be fast and easily recovered in the relatively small Australian market.

Given the important role of human capital experience in these industries, the German “Mittelstand” sees its locational advantages still at home and chose exports as the preferred entry mode into the Australian market. But partly this pattern is also the consequence of a weakness of the German service industry – at least relative to its manufacturing sector. For the tertiary sector FDI is the major way of market entry, hence Australia’s relative strength in FDI in Germany and Europe.

Not to be left outside in Asia

Second, the initiative reacts to the proliferation of bilateral and “mega-regional” initiatives. Australia has signed numerous bilateral trade agreements, most importantly from the German perspective, one with China. But there are also the negotiations on the Trans-Pacific Partnership (TPP), which involves the USA and Asia-Pacific minus China and the Regional Comprehensive Economic Partnership (RCEP), which includes China but not the USA.

Europe has no involvement in any mega-regional agreement with Asia yet, but Transatlantic Trade and Investment Partnership (TTIP) negotiations with the United States and a pending ratification of the CETA with Canada. However, both agreements receive strong criticism in Europe, particularly in Germany, eventually stalling the agreement. Angela Merkel has explicitly mentioned this in the press conference in Australia.

These new mega-regional agreements typically aim at regulatory convergence across countries and are seen as enablers for global and regional production networks. They also aim at dealing with different health, social and environment standards. Thus, they interfere more deeply into domestic affairs than any previous trade agreements.

Not surprisingly, trade negotiators have found it difficult to establish such rules in a global agreement at the WTO level and have opted for the easier bilateral or regional route. In this sense these agreements are substitutes for a substantially new WTO agreement. While they can be stepping stones for reaching this objective, in the meantime those who are left out are afraid of trade and investment diversion. The only trade negotiations that are geographically more diversified are those on the Trade In Services Agreement (TISA), which is currently negotiated mainly between the EU, Australia and the USA, but also involves (including the 28 EU countries) 50 WTO member countries.

In sum, the initiative could serve as a precursor for negotiations on a European-Pacific trade and investment agreement.

Exporting oneself out of the dooming Eurozone recession

Finally, the Eurozone and especially Germany are in dire need of a fast growing Asian market and cannot afford to lose market shares in the region as their growth model now almost entirely depends on export success.

Germany is obsessed with a “black zero”, a balanced government budget. Most other Eurozone countries follow the same route, either for ideological reasons or because they have to bring down high government debts. Moreover, in many countries of the Eurozone, the private sector is saving much more than investing. Even the corporate sector, instead of borrowing to invest has become a net saver.

In Germany (2013) savings exceed investments so excessively that the economy depends on net exports of about 7% of GDP. Given the depressed state of many other Eurozone economies, these net exports must be generated elsewhere. Failing to do so could hamper the already weak growth of the region further and would make de-leveraging even more difficult.

The first and the second best