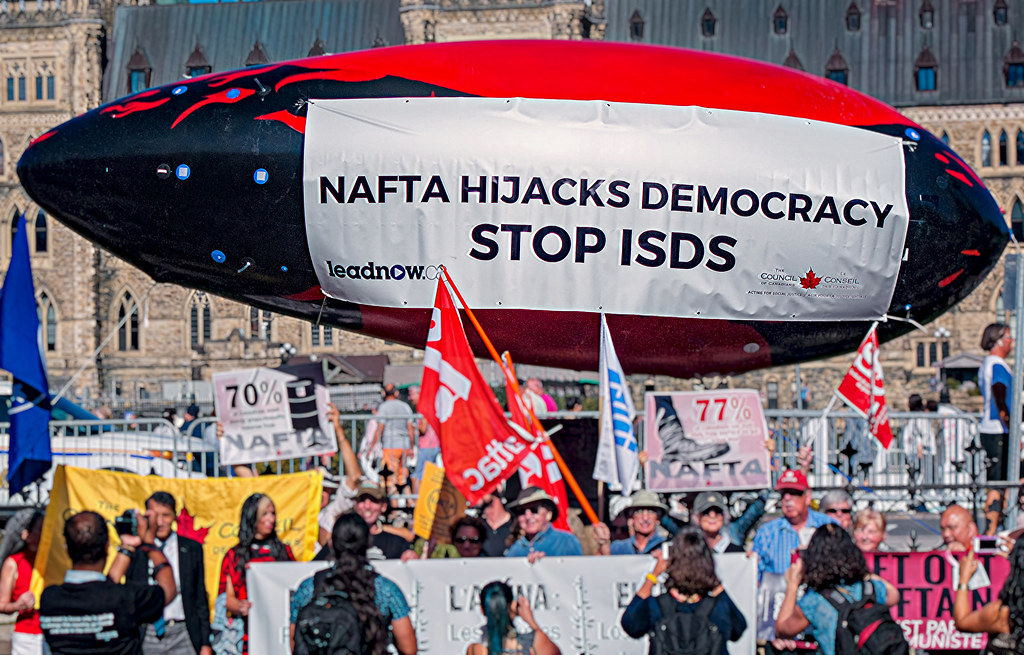 One step forward, two steps back in the struggle against anti-democratic corporate trade rules

In the decades that followed, such investment rules proliferated in thousands of similar bilateral treaties, as well as the investment chapters of trade agreements. Policymakers, particularly in developing countries, found themselves caught in an inter-locking web of rules and institutions committed to promoting and protecting wealthy foreign investors — with little regard for the costs to democracy, the environment, and the public welfare.

Pakistan recently announced plans to break free of this web of excessive corporate power. This is a major milestone. But progress on this front is uneven. Ecuador, once a leading critic of the investor-state dispute settlement (ISDS) system, is regressing. And the United States is facing the largest lawsuit in its history by a Canadian pipeline company.

The government of Pakistan was motivated by a case brought by the Australian mining company Tethyan Copper before the most-used international tribunal for these kinds of cases, the World Bank’s International Centre for Settlement of Investment Disputes (ICSID). This unaccountable, supranational tribunal ordered Pakistan to pay the company $4 billion in compensation for the denial of a mining permit.

Pakistani Prime Minister Imran Khan has approved a new investment treaty template whereby any disputes will now be settled through local arbitration. According to Fareena Mazhar, Pakistan’s Board of Investment Secretary, “the new BIT template was developed in consultation with all the stakeholders and with the active assistance of law and justice division and the attorney general of Pakistan.” And she explained that “all the new bilateral investment treaties would be negotiated in accordance with the new template in order to minimize the risk of international arbitration and to provide a policy space to government to enforce economic policies of public interest.”

Meanwhile in Ecuador, the new neoliberal government of Guillermo Lasso has backtracked by rejoining the ICSID convention, the international agreement that governs the investor-state dispute settlement system. Former President Rafael Correa had pulled out of this convention more than a decade. Lasso falsely claims that his decision does not have to be ratified by the National Assembly.

The Correa government also established a commission to audit investment protection treaties and the international arbitration system. Alberto Arroyo Picard, a retired professor of Mexico City’s UAM-Iztapalapa university who served on that commission, points out that the data show that bilateral investment treaties were not significant in attracting foreign investment to Ecuador. Moreover, contrary to promises, foreign investment had little effect on job creation and quality or on economic growth. Arroyo describes Correa as inconsistent on trade issues, pointing to his support for bringing Ecuador into the Colombia-Peru free trade agreement with the European Union in 2016 and postponing the publication of the commission’s final report until the end of his mandate. But he points out that Correa ended up canceling 16 bilateral investment treaties during his term.

Lasso is shifting the country back toward the neoliberal model, presently intensifying the negotiation of a trade deal with the United States to attract more investment in the oil sector, overlooking that U.S. companies such as Occidental Petroleum, Chevron, and Burlington trampled indigenous peoples’ environmental rights and won lawsuits against Ecuador for more than $2 billion.

Peru seems ready, however, to follow a different path: many are hopeful that President-elect Pedro Castillo will fulfill his campaign promise to withdraw the country from the World Bank’s arbitration tribunal and repeal Peru’s investment treaties, acknowledging the increase in lawsuits against his country in recent years, particularly from mining companies.

It is difficult to measure the full monetary impact of investor-state claims, considering that many of these are settled behind closed doors. But World Bank data reveal that the number of lawsuits filed by corporations is increasing. And the plaintiffs commonly cite violations of protections against “indirect expropriation,” which allows them to claim compensation for regulatory actions that reduce the value of their expected future profits. Latin America is the region where countries have faced the largest number of such lawsuits, followed by Eastern Europe and Central Asia.

Richer countries are also the target of these kind of lawsuits. On July 2, Canada-based pipeline operator TC Energy announced its intention to sue the United States a second time for more than $15 billion. This case is in retaliation against President Joe Biden’s decision to revoke the permit for the Keystone XL project, deeming it incompatible with efforts to address climate change and in response to indigenous communities’ demands. The company had first sued the United States after the Obama administration revoked their permit, but dropped it when the Trump administration overturned this action.

While the United States-Mexico-Canada Agreement put new limits on investor-state cases, TC Energy was able to file this lawsuit because of a “legacy investments claims” clause that applies to existing investments for three additional years.

When still a candidate, Biden spoke out against investor-state lawsuits, promising not to include the investor-state mechanism in future treaties. Now as President, he must take concrete measures to remove these clauses by amending existing treaties.

Mexico is one of numerous countries that would benefit from the termination of these investment rules. Under President Andrés Manuel López Obrador, the government has adopted several policies that could provoke international lawsuits. The country already faces claims for more than $4 billion — and there are more claims for undisclosed amounts— most of which have been launched by mining companies. A continuation of the investor-state dispute settlement system is also in conflict with López Obrador’s stated goal of ending neoliberalism and defending the country’s energy resources.

More countries should follow the example of Pakistan. It’s time to put an end to ISDS and the excessive corporate powers it enables.

Manuel Pérez-Rocha is an Associate Fellow of the Institute for Policy Studies in Washington, D.C. and an Associate of the Transnational Institute in Amsterdam. Follow him @ManuelPerezIPS