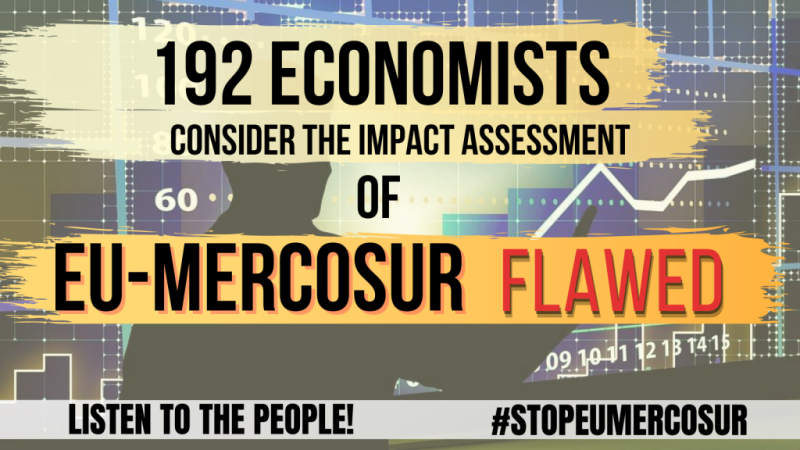 Open Letter regarding the economic impacts of the EU-Mercosur agreement

We, the undersigning economists, want to contribute to a critical assessment of the EU-Mercosur agreement that is being prepared for ratification by EU Member States, EU institutions and Mercosur countries. According to the European Commission, the proposed agreement will be economically beneficial for both European and Mercosur countries in terms of rising GDP levels. This has been underlined in the draft final draft final report of the Sustainable Impact Assessment (SIA) for the trade part of the EU-Mercosur Association Agreement, carried out by researchers of the London School of Economics (LSE) and published in July 2020.

We consider it important to inform the public that the economic models used to calculate those ostensible gains are inadequate for assessing the social and environmental impacts of this agreement. Other studies using different models include the environmental costs of transport across the globe, the effects of deforestation and on small-scale farmers in the EU and Mercosur countries. These alternative impact studies show very different outcomes, demonstrating how this agreement would obstruct fulfillment of the Paris climate goals and would have severe economic and social effects on workers and farmers – particularly family farmers – both in Latin America and Europe.

Why is the SIA misleading and what are its flaws?

1. The model used for the calculation of the potential impacts of the EU-Mercosur agreement is based on unrealistic assumptions and does not use the actual data of the EU-Mercosur agreement regarding tariffs reduction, import quotas etc. The model used is based on the computation of the general equilibrium model (CGE), which relies on the assumption that all markets are in equilibrium and perfectly competitive. Furthermore, the long term projection of the model presupposes dynamic gains from trade liberalization. This means that the model delivers predictions of welfare-improving outcomes by default. What empirical evidence does show, however, is that the actual net impact of trade liberalization on income, employment, labour productivity, innovation and competitiveness might well be negative, at least for some sectors. More importantly, trade agreements can and do generate imbalances. The gains and losses of trade agreements predicted by this SIA thus tell little about the real impact. A meaningful SIA would be based on a model that operates on more realistic assumptions, and would, moreover, also take into account the actual tariff reductions and import quota agreed in the treaty in order to assess the effects on trade flows, prices, etc.

2. The GDP increase for Europe is negligible. For Mercosur countries, it predicts a GDP decrease as well as massive loss of industrial jobs. The SIA predicts over 10 years a negligible 0,1% GDP increase for the EU, and for Mercosur countries -0,1%. More realistic assumptions would expose that the underlying distributional sectoral changes resulting from the model tend to be much larger. For the Mercosur countries, the SIA predicts rising unemployment in the motor vehicles sector in Uruguay, in the machinery sector in Brazil and Paraguay, and in the chemical and pharmaceutical sector in Uruguay, Paraguay and Argentina. There are also negative effects on Mercosur family farm production (grapes, milk, etc.), as well as in Europe, generating social problems for a very sensitive sector in both regions. Overall, the outcome of this SIA not only underestimates the negative effects of trade liberalization, but even itself foresees negative impacts in many respects for the Mercosur countries. Furthermore, GDP increase as a measure of wealth is outdated, certainly in times of climate crisis and the need for a deep socio-ecological transformation of our economies.

3. The SIA downplays the impact of the agreement on deforestation in Mercosur countries. While it refers to the increase of deforestation in 2019, it compares the increase to trends during the 1988-2008 period. Rather than referring to the FAO (Food and Agriculture Organization) Global Forest Resources Assessment of 2020, it refers to the 2016 report. As a result of using outdated data, the impacts of the agreement on deforestation are minimized. The recent report (English summary here) of the experts commissioned by the French Government on the draft EU-Mercosur agreement reaches very different conclusions. It provides additional estimates of the ecological impact, taking into account the risk of deforestation linked to the increase in beef exports (without, however, taking into account the areas needed to feed these cattle). According to the report, deforestation could increase from 5% to 25% per year for 6 years, solely due to the increase in beef exports generated by the agreement.

4. The SIA does not factor in the new economic situation, due to the COVID19 crisis, prevailing in the EU and Mercosur countries. Globally, unemployment levels have increased since the start of the crisis. Currently, 7.2% of EU workers (15.2 million persons) are jobless, and this level is expected to increase due to the COVID19 recession. In Mercosur countries, too, unemployment levels are high, while the informal sector is extensive. The application of the CGE model, which is based on the assumption of full employment, is therefore not appropriate for our current economies.Given these flaws and what is a stake for farmers (especially family farmers ) and workers in both regions, for indigenous people in the Amazon and other forest regions in Mercosur countries, and for the climate and the livelihoods of all citizens in this world, we consider it urgent and appropriate that the European Commission commissions a Sustainable Impact Assessment of this agreement that is based on the most recent empirically available data and additional modern modeling tools, to evaluate the potential economic, social and environmental impacts as well as the real costs of labour market adjustments that may be generated by the proposed EU-Mercosur trade agreement. Such an assessment should also be executed in a trans-disciplinary manner, including an assessment of the environmental and climate impact of this agreement.