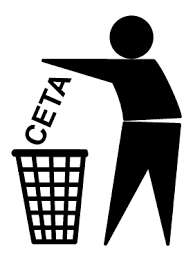 The Canada–European Union Summit, which starts on September 26 in Ottawa, will mark the conclusion of the negotiation of the Comprehensive Economic and Trade Agreement (CETA) between Canada and the European Union. The CETA involves much more than just trade in goods; it will also encompass trade in numerous services, including financial services and public services. In addition, the agreement covers regulatory cooperation, public contracts, agriculture, protection of investors and labour mobility. The texts, which we are told are final, were kept away from the scrutiny of members of parliament throughout the negotiations and have been slow to be made public. This is a notorious subversion of democracy that is intended to suppress any debate, thus presenting our citizenry and elected officials with a fait accompli with no possibility of amendments. Since no parliament will have been able to take a position on its provisions, the Ottawa summit will in essence be a new public relations exercise to publicize the agreement, with the customary speeches and photos. The formal adoption process will follow, and the agreement will then come into force.

1. The CETA is an assault on democracy

For years we have been denouncing the secrecy surrounding these negotiations on matters of critical importance to the future of our societies, and we demand that a truly public debate take place. The anti-democratic nature of the negotiations is again dramatically reflected in this summit, which will celebrate one of the most ambitious agreements in the world (the CETA extends far beyond the WTO agreements and most of the other trade agreements) before parliaments have even considered it, let alone endorsed it. The recent leak of the nearly finalized texts enables us to confirm that the CETA will severely affect citizens of the countries concerned, as it will enshrine the weakening of the powers of governments in relation to foreign investors, the obligatory opening to private corporations of markets and services which could have remained in the public domain, or even increases in the cost of medications, among other issues.

2. The CETA will limit the regulatory powers of States and give corporations a right to challenge future legislation and regulations

One of the most troubling aspects of the CETA is the Investor-State Dispute Settlement mechanism (ISDS), which enables foreign investors to sue governments if they enact public regulations or legislation that could affect the economic value of their investments or anticipated profits. Some corporations have already used this type of mechanism, claiming millions from governments by contesting too high minimum wages (Veolia v. Egypt); basic environmental protections (Lone Pine Resources v. Canada); nuclear withdrawal (Vattenfall v. Germany); measures protecting the health of citizens (Ethyl v. Canada or Philip Morris v. Uruguay and Australia); and even our courts’ decisions (Eli Lilly v. Canada). In fact, ISDS confers inordinate rights to large corporations, thus affecting social policies, use of land and territory, measures to protect the environment, public transport, telecommunications, etc. This mechanism allows corporations to challenge legitimate and democratically enacted legislative and regulatory amendments, thereby globally limiting the rights of States to regulate and to govern for public benefit. Furthermore, the CETA allows investors to preserve all of their recourses and privileges for up to 20 years after the withdrawal of one of the parties to the agreement.

3. The CETA will protect corporations more than workers

The European Union apparently refused the inclusion of enforcement mechanisms (complaints, financial penalties, fines) to ensure the respect of fundamental labour rights. The vague language relating to labour could also curb the development of social protection measures by subordinating them to other kinds of standards or even to less stringent private initiatives.

4. The CETA will limit the role of States and regional development

We also deplore the fact that the powers of subnational governments (provincial, municipal and others) to utilize public contracts as a means of supporting economic development have been greatly limited. It will henceforth be impermissible to set minimum local content thresholds for investors, or to favour local products or services in a great number of public supplies. The CETA will also make it impossible to renationalize privatized services, or to develop new public services.

Benefits for citizens, if there are any, could be some time away and would be very marginal. According to data from the European Commission Directorate-General for Trade, seven years after the agreement comes into force, the CETA will result in economic growth of only 0.09% annually. This is a paltry outcome, which demonstrates that the CETA can only be justified for the interests of large corporations. This agreement is consistent with the idea of accumulation and growth, supported by transnational investors, for whom profits for multinationals are more important than beneficial effects for citizens.

A call for mobilization

The economic and political model that the CETA advances will result in an increase in inequalities, considerable rollback of our environmental and social protection, and will allow control by transnational corporations of our most basic economic, social and environmental rights. The ratification of this agreement will bind our States for decades to come, without permitting consideration of other proposals based on cooperation and solidarity. To enter into such an agreement is as unacceptable as it is irresponsible.

It is thus with a unified voice that we urge elected representatives on both sides of the Atlantic at all levels of government to reject this agreement, which has been negotiated outside legitimate democratic frameworks, until such time as the CETA is publicly debated amongst all constituents of Canadian and European civil society.

We are calling for the mobilization of all Canadian, Quebec and European social movements and organizations, as well as all those citizens who are concerned by the effects of such agreements, in order to exert pressure to hold a broad and informed public debate on the CETA. In the short term, we invite everyone to mobilize at the Canada-European Union Summit in Ottawa on September 26 at noon in front of the Canadian Parliament Buildings, and during the European Day of Action against TTIP, CETA, and TISA on October 11, and to actively participate in the self-organized European Citizens’ Initiative (ECI) over the coming months.

Finally, we are launching an appeal for solidarity to all social movements around the world, and we undertake to continue to build with them the articulation of our respective struggles against free trade and investment agreements, both those in existence and those under negotiation. We invite them, through their networks, to consider holding a Global Day of Action against free trade and corporate power in the second quarter of 2015, with the aim of together defeating the infamous “Investor-State” mechanism, while reaffirming the primacy of peoples’ rights over the unbridled powers and impunity enjoyed by multinational corporations.

Your organization wants to join this initiative? Send your endorsement or support to [email protected] until Oct. 6th, 2014, towards the European Day of Action against TTIP, CETA, TISA on October 11, 2014.