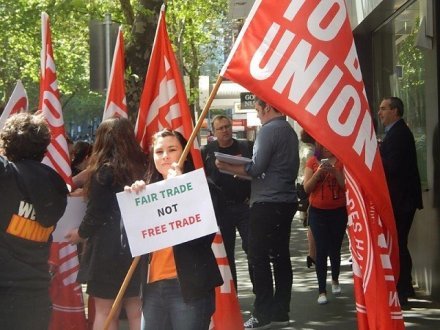 PACER Plus bad for business

A new briefing paper released today states that Pacific businesses will pay too high a price from the current proposals in the regional trade agreement, known as PACER-Plus. The paper, released by the Pacific Network on Globalisation (PANG), details the dangers posed by PACER-Plus for Pacific livelihoods and how out of touch with the Pacific reality such free trade agreements are.

“PACER-Plus is sold as a great economic outcome for the Pacific but what we’re seeing is an agreement that is not being designed to support a dynamic Pacific economy. Rather it is one that will allow the bigger companies from Australia and New Zealand to further their already significant interest in the markets of the region” commented Adam Wolfenden, Campaigner with the Pacific Network on Globalisation.

The briefing paper, titled “Bad for Business: How PACER-Plus is a price too high for Pacific livelihoods and businesses” warns that an agreement in its current form will see weak safeguards unable to best protect local industries, significant loss of revenue for Pacific governments, and a shrinking ability to support domestic producers.

“Safeguarding local and infant industries is crucial to creating vibrant economies that support domestic producers yet the mechanisms proposed by the Office of the Chief Trade Advisor under PACER-Plus are too narrow in their scope, response and trigger to be of best use to protect Pacific businesses. Even the contentious interim Economic Partnership Agreements, something Papua New Guinea and Fiji only reluctantly signed has a broader safeguard mechanism than what is contained in PACER +,” added Mr Wolfenden.

“Australia and New Zealand already have a permanent, strong safeguard mechanism yet they are arguing against offering the same thing for the Pacific Islands. We keep hearing how this is a development agreement but there can be no development for the Pacific if their industries are wiped out,” continued Mr Wolfenden.

PACER-Plus will see Pacific Island Countries making binding commitments on their import taxes, placing a ceiling on them all as well as planning their lowering over a number of years.

“Governments have an important role to play in supporting Pacific businesses but PACER-Plus will undermine their ability to do so. Binding all import taxes, undermining the ability to ensure local content is used in any investment, and limiting the use of export subsidies robs the Pacific of the policy tools, used by almost all countries to develop, needed to create a supporting business environment in the Pacific. The result will be less opportunities for Pacific enterprises,” stated Mr Wolfenden.

The recent Forum Economic and Trade Ministers Meeting in the Cook Islands set mid-2016 as the deadline for concluding the negotiations on PACER-Plus.

“The Pacific is set to lose significant government funding from cutting out taxes from trade, this impacts the ability to fund those activities the support business like infrastructure, health care and education. We urgently need a suspension of the negotiations, the release of the text and an independent impact assessment of the proposals under PACER-Plus. Only then can we get the full picture about just what PACER-Plus will mean for Pacific livelihoods” concluded Mr Wolfenden.

The next round of negotiations for PACER-Plus will take place in Nadi, Fiji on December 7-11.