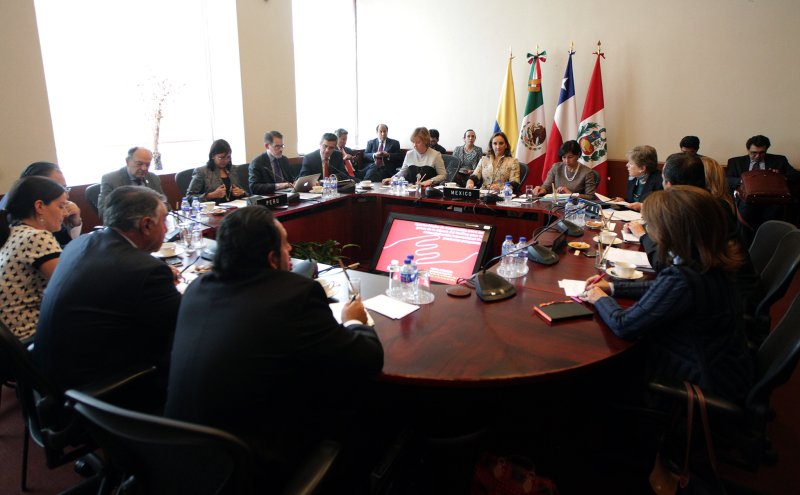 Pacific Alliance countries are in talks to expand the trade bloc outside Latin America and into high-growth Asia as the future of established deals, such as NAFTA and the evolving Trans-Pacific Partnership (TPP), hang in the balance, officials from Mexico and Chile told CNBC at the sidelines of the Asia-Pacific Economic Cooperation (APEC) meeting in Hanoi, Vietnam.

Talks aimed at widening the six-year old "Alianza del Pacifico" (Pacific Alliance), the world’s eighth-largest economic block and exporter, are at an exploratory stage, but have taken on an more urgency since U.S. President Donald Trump withdrew from the TPP, leaving the remaining members scrambling to rescue the deal or forge new partnerships.

Mexico’s economy minister said though member states were committed to resuscitating the TPP, with or without the U.S., they didn’t want to squander years of effort building trade relations with Asia.

"It is in the best interest of Mexico to be linked to the Asian economies," said Mexican Economy Minister Ildefonso Guajardo. "We are now creating a new membership…in order to not waste the negotiating capital we have invested in TPP."

Deborah Elms, executive director of the Asian Trade Centre, said though Pacific Alliance members are trying to widen the appeal of the bloc, it was "big on rhetoric, short on deliverables."

Attempts to engage a larger membership may be motivated by obstacles preventing cross-border trade within their own region, Elms said.

"For countries like Chile, they live in a difficult neighborhood," she explained. Mercosur, the far older South American economic and political bloc, "has been stuck and protectionist forever. This has left Chile unable to craft a sensible trade strategy in the region. They have instead struck out on their own and signed agreements with anyone else who is willing and started down the Pacific Alliance path to help them cope with their problem."

Chile’s head of international trade, Paulina Nazal Aranda, said the Pacific Alliance may name new countries that may join the bloc at its summit next month in Cali, Colombia.

"It’s well known that New Zealand and Australia are in the top list for us to initiate this kind of process," Nazal said. Both counties are "perfect candidates," she said, as "they have high quality standards" and negotiations can be completed "in the short term."

Though concrete benefits may be hard to discern immediately, Australia’s Minister for Trade, Tourism and Investment, Steven Ciobo, told CNBC that his country had held "good discussions" with the Pacific Alliance over the past 12 months.

This was part of a broader plan to pursue "bilaterals, plurilaterals and multilaterals," Ciobo said. "All I can say to you is watch this space."

"I’ve formally written to the Pacific Alliance members requesting that New Zealand become an associate member," New Zealand Trade Minister Todd McClay said in an interview with CNBC on Sunday. "We see South America, along with Mercosur, with Europe, with Asia, our relations with the U.S. as very important to New Zealand trade policy."